Edgar, Aldo or Holloway? Ask this to three different people and don’t be surprised if you get three different names. Of course at UFC 200 one of either Frankie Edgar or Jose Aldo will get their hands on the interim title. But, in my opinion, this does not necessarily mean they will face the current champion, Conor McGregor, for the undisputed crown, despite Dana White’s word. 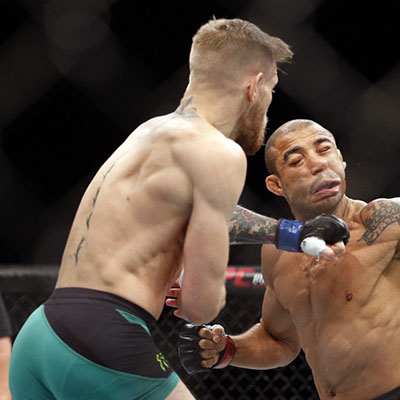 I occasionally need to remind myself that Conor is actually the champion at 145 lbs. Since he claimed the gold at the back end of last year at UFC 194. Any talk of a potential opponent has been outside of his weight class or even outside of his sport entirely! It was recently announced that McGregor would face Nate Diaz for a second time, at UFC 202. In a Welterweight contest 25 pounds above the weight at which he holds his belt.

The gruelling weight cut to 145 lbs has been well documented and McGregor himself. Has stated in the past that his time at Featherweight may be limited for this reason. There is a very real chance that we have seen Conor’s last fight as a UFC Featherweight. Here’s hoping this is not the case as he has unfinished business. With the division and in particular the three men previously stated.

Jose Aldo’s status as one of the best pound for pound fighters in the world is undeniable, even after coming off a 13-second knockout loss to McGregor. The fact that he lost in this manner can be to his detriment or to his advantage in staking a claim for a chance at regaining his title. It can be argued that if he could not reach the 15-second mark in their first bout why should he deserve a second chance.

Should The Former featherweight Champion Jose Aldo Be The One?

On the flip side, should a man who was undefeated in nearly a decade. Prior to that flash knockout not get a chance to prove his true calibre? McGregor was the deserved winner of their brief fight, timing Aldo perfectly with a left hand. But a fight with an emotionless Aldo is a completely different scenario. Even if Aldo is not your preferred choice you would be hard-pressed to find and MMA fan who would not respect the decision and be excited nonetheless. 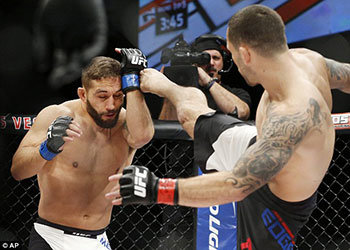 Frankie Edgar can also boast a serious case as to why he is the true contender to McGregor’s throne. Much like Aldo, ‘The Answer’ is a former UFC champion and outright legend. He claimed the Lightweight title back at UFC 112. In a division in which he was frankly dwarfed by all other competitors.

But Frankie’s heart has always been his biggest attribute. Which is saying something as his technical ability in all areas is outstanding. Having won his last five fights in dominating fashion, if McGregor had been booked to defend his title rather than challenge RDA for the Lightweight belt. I’m convinced Edgar would have got the call. But such is the way events have unfolded he will have to bide his time.

Of the three, I believe Edgar poses the most awkward set of skills for McGregor. We saw the relative ease at which Chad Mendes was able to assert his wrestling against Conor but in the end, his gas tank was his undoing. Edgar is known for his smothering groundwork and his ability to sustain it over the duration of a fight, be it three or five rounds. You’d be brave to bet against Frankie, whoever is stood across the cage from him.

How About Max Holloway?

The one man who arguably knows McGregor’s game the most is the only man to go the distance with the Featherweight champion, Max Holloway. Since his unanimous decision loss to the Dubliner Holloway has simply been on a tear. He holds the third-longest win streak of an active fighters in the UFC (9). Sitting behind the two best pound-for-pound fighters in the world, Demetrious Johnson (10) and Jon Jones (13). When you take into account some of the names he has beaten on this run. Andre Fili, Cub Swanson, Charles Olivera, Jeremy Stephens and Ricardo Lamas to name a few, it seems that a title shot is a real possibility for Max ‘Blessed’ Holloway.

I personally do not have an outright pick for who deserves the next Featherweight title shot. Each of the three contenders has done more than enough to deserve a shot at the gold in their own unique way. Inevitably, at least one of these guys will end up losing out. But, whatever happens, the fans most certainly won’t.