The dreaded weight cut, that time leading up to a fight when a fighter must sacrifice all those things we take for granted, like favourite foods and not having to gorge on endless gallons of water. We spoke with professional MMA fighter and kickboxer Darragh Kennedy from Kokoro, who fights at Enfusion this weekend.

About his own personal experiences of the weight cut. A process seems which is different for each and every fighter. How tough can it be and what type of toll does it take on the body and mind? Let’s just say, the fight begins long before you ever step foot on the canvas …

So how long have you been in this camp, 8 weeks?

Yeah, usually 8 to 10 depending on how much notice you get of a fight.

What weight do you normally start at?

Generally, I float around 100 to 101 kilos. Again depending on how active you are, what time of the year etc.

So what weight are you fighting at?

95, nice and heavy. I’m fighting at heavyweight. Compared to MMA, in kickboxing, there would be smaller divisions and there’s more of them. Even then light heavyweight is in around 80 something kilos.

So what is the story with the weight cutting and how far out does it start?

To be totally honest, it would start as soon as you know you’re fighting. Generally dieting, eating clean, the closer you can get to the weight from a kickboxing point of view awesome. Cause a weight cutting, a water cut is always going to affect your performance. Regardless of how well you do it, our how badly you do it, you’re dehydrated. It takes a couple of days for you to get your energy back 100%.

So the process of water loading. We keep hearing again and again from a lot of fighters saying the fight is won or lost before they ever step inside the cage or ring. So specifically how hard is the weight cut outside of the actual training? 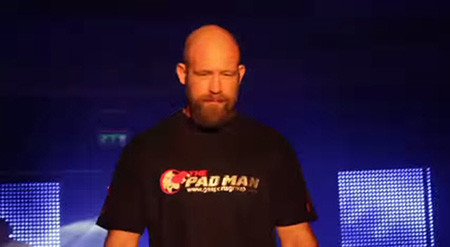 If it’s done right… it’s not too hard. If it’s done wrong, it’s nigh on impossible. Mentally it will break you. There’s a lot of people… I can’t stand saunas anymore. Just purely because of the weight cutting. There’s a lot of lads that won’t cut too much because it will affect you. It will limit your gas tank, limit your energy levels. It just nosedives your performance, endurance levels drop.

So how many litres of water do you drink a week out?

I suppose it comes down to, I’m not doing it because I like it. It’s not like your brain takes over its like your brain shuts down.. ah here we go… just get in and have it over with… Like use the same as far as dieting is concerned, you know. I’d be a big fan of food. But sometimes you know, you’re dieting for a fight, rice and plain chicken. It’s just like mah, its fuel, its food. And you have your cheat days then, something you to look forward to.

So 12 or 13 litres on Sunday and it winds down as the week goes on?

So the way I do it, say Sunday, Monday, Tuesday you do 12 – 13. You do half rate of that on Wednesday because you’re weaning out. Thursday then, the day before the weigh-in. Generally, stop drinking 24 hours out. No food, no drink, couple of sips. At that point your brain shuts down, you’re thinking of the fight, thinking of the weigh-in.

Curious question, why do you do it, it doesn’t pay that well?

Honestly because its fun, you know what I mean! If it was about the money I would’ve given it up years back. And if I ever don’t enjoy doing it, I’ll stop. Look at Ernesto Hoost, he’s 53 and still fighting. If I’m in shape to fight at 53 and I still enjoy it, yeah I’ll jump in.

Darragh fights this weekend at Enfusion Ireland and Future Talents.