Originally slated to fight at UFC Fight Night Sydney against Richie Vaculik. Ireland’s Neil Seery finally gets his opportunity to step back inside the Octagon this weekend at UFC Fight Night Stockholm. After suffering a series of mishaps in the build-up to his fight in November. Seery is back on track and in the hunt for flyweight gold. We chatted with him before he flew out to Sweden to find out how his preparations have been going this time around. And get his take on what went wrong back in November.

So what has it been like for you waiting for that call after you getting the rib injury?

Yeah, to be honest, I was really looking forward to it, I had everything set for that trip. I had my time off work, I had my work put in in the gym. But from the word go, I got a cut on my eye five weeks out. It seemed to be a disaster from the start. I was upstairs rolling with my head taped and it just kept constantly bleeding, opening and stuff.

And then I go over to Pascal’s where I always go and box and just the first round, went in touched gloves. Took a shot and I was like “That didn’t feel right”. Kept going and then it went to the second round and I couldn’t move. It was just one of them, I seem to be cursed from the start. So, I really was looking forward to it but these things happen for a reason, so I’m not going to whine and cry about it.

Yeah well sitting out the card and then obviously my opponent got beat. And then the lad that stood in getting knockout of the night… Walked away with 50 grand hah! When you’re down you get stabbed in the back, but that’s the life you know what I mean. I’m not going to cry about it, it’s only 50 grand who needs that anyway…

With the exchange rate…

So your first fight back UFC Fight Night Stockholm, the biggest card ever in Europe. What is your assessment of the event? 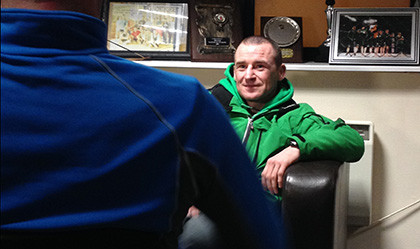 Ah yeah, the card is unbelievable. In 2009 when the UFC was here, we had a gym down in Kilbarrick and Henderson was down their training. I tweeted a photo of that the other day. Now look, I’m on the same card as Dan Henderson six years later.

Who would’ve thought sitting down there UFC Stockholm, six years later? The man I went down to get a picture of Dan Henderson because I always followed him you know.

That was the same and all the fighters, Rich Franklin was down there. They were all down there. I was in the crowd in the O2 in 2009, do you know what I mean. It’s one of them things, now I get a fight on the same card. It’s brilliant, couldn’t ask for a better card, could I.

Between Boston and Stockholm, you couldn’t ask for a better run for Irish MMA?

It’s really building, it’s really good to see you know. But you really need to settle on that wave, don’t get carried away you know. Don’t let it go to everybody’s head. Just get in do your job, do what you have to do whether you win, lose or draw. Put on a show and enjoy it.

And having Paul Redmond fighting on the same card as opposed to being in your corner. What’s it like seeing him now on the UFC roster after putting in all the hard work?

It’ll be different but it would be enjoyable. Look, we get in we fight we do what we have to do. We get out and we enjoy the rest of the show. We get to sit back and watch everybody else fighting you know, so it should be a brilliant experience.