The UFC returned to Brazil for Fight Night 38 and another night of high-octane action from the sport’s largest promotion. The Ginásio Nélio Dias in the city of Natal hosted the rare Sunday night event. And the Brazilian crowd were not disappointed with the standard of fights on display. A highly anticipated rematch between veteran light heavyweights Mauricio “Shogun” Rua and Dan Henderson headlined the six-fight strong main card.

The first time these warriors clashed inside the Octagon. The resulting five-round spectacle was lauded as one of the greatest fights in the history of MMA. Shogun was looking to exact revenge on Hendo after losing against the American via decision in 2011.

Both fighters started tentatively with Shogun having the better of the early exchanges. Having continued success with his kicks from range. Henderson then stunned Shogun with a massive left hook. But his hastiness to move in and land more bombs saw him getting knocked down with a wonderfully timed left-right counter. The American managed to survive the round, despite eating some heavy shots on the ground. Under the watchful gaze of referee Herb Dean, who looked like he was moments away from stopping the fight.

Rua continued his domination in the second round landing stiff jabs, vicious leg kicks and pummelling combos. Henderson didn’t appear to have an answer for the onslaught which culminated in a derisory takedown attempt that resulted in the American stumbling headfirst into the cage.

It was long before Shogun dropped Henderson again, this time with a forceful right uppercut. But Henderson pulled guard and survived by not allowing his opponent to showcase his ground and pound.

Shogun vs Henderson Going Into The Third round

Hendo appeared to be fully recovered and more sure-footed in the third round as he scored some punches early on. The fighters clinched in the centre of the Octagon. Rua managed to break free but as he did so, a devastating H-Bomb right hook landed flush on his nose. Causing him to stagger backwards and drop to the canvas. 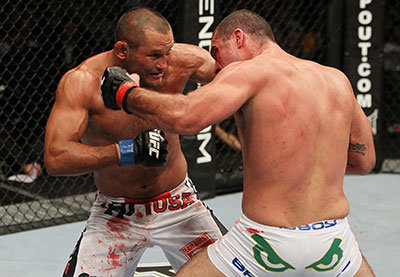 Hendo swarmed in and landed another heavy right followed by a series of hammer fists which forced Herb Dean to stop the action 91 seconds into the round. The superb comeback victory earned Henderson the Performance of the Night bonus while the fight itself was awarded the Fight of the Night accolade.

The co-main event was a middleweight bout between former TUF contestants Cezar Ferreira and C.B. Dollaway. The fight started at a blistering pace with Ferreira landing successive hooks before being rocked by a big counter left. This appeared to have agitated the Brazilian who promptly responded by strolling forward into the pocket and throwing wild, swinging hooks.

Dolloway, seeing that his opponent was failing to cover up, unleashed a thunderous left-right combo that collapsed Mutante to the mat. The American rushed in and finished the fight with a barrage of punches from the top position which gave him the TKO victory just 39 seconds into the fight.

Next, there was a battle of TUF winners as Leonardo Santos took on Northern Ireland’s Norman Parke in the lightweight division. Santos fired first, landing a stinging leg kick early. An eye-poke on Parke halted the action briefly before Santos landed a big body kick followed by an uppercut which forced “Stormin” Norman into a clinch. Parke was in total control for the rest of the round, using his dirty boxing skills effectively in the clinch.

Parke started as the aggressor in the second with a flurry of kicks. However, the Northern Irishman was artfully countered by a heavy uppercut. Parke stuffed another takedown attempt by the Brazilian and was continuing to control the fight in the clinch before he was controversially deducted a point for grabbing his opponent’s shorts.

The fighters engaged in a clinch early in the third round where Parke was content to see fight remain. Parke stayed the busier of the two by landing punches upstairs and knees to the inside of the leg. The judges scored the fight a majority draw (29-27, 28-28, 28-28) but in truth, it was a drab affair.

Fabio Maldonado battled it out with Gian Villante in the second light heavyweight contest of the main card. Villante scored an early takedown and transitioned swiftly into side control. The American then took the back of his opponent and landed a number of thudding knees to the thigh without response before dumping Maldonado to the ground again. Villante finished the round on top.

Villante started the second well by rocking Maldonado with a left hook. Maldonado responded by working off his stiff jab before being taken down at the fence again. As they separated, Villante opened up a cut on Maldonado’s forehead with a damaging knee. 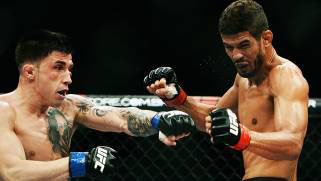 This seemed to reinvigorate the Brazilian who began letting his hands go, landing punishing combinations to the head and body. Maldonado stuffed a takedown before connecting with two savage body shots. Villante looked extremely fatigued throughout the round.

Maldonado put on a boxing masterclass in the final round and scored an almost absurd amount of strikes from the feet. An exhausted Villante descended to the canvas after eating several body shots but somehow survived to see the fight out until the bitter end. Maldonado got the decision victory (29-27, 29-28, 29-28).

Michel Prazeres squared off against Mairbek Taisumov in the night’s other lightweight matchup. After a slow start, the Brazilian landed a couple of combos before taking down his opponent and transitioning into full mount. Taisumov managed to stand back up after reversing a north-south choke attempt. “The Tractor” was very quick to bring the fight back down to the mat and showcase his ground and pound. The Russian had a point taken in the closing moments of the round for an illegal head kick.

Prazeres caught a head kick early in the second and countered it with a huge right hand. Taisumov was deducted another point for grabbing the fence to prevent a takedown. Prazeres finished the round strong, landing big combinations and scoring up top with a head kick.

After illegally stuffing another takedown attempt by grabbing the fence, Taisumov was given a final warning by the referee. This seemed to spur on the Russian who finally began letting his hands go and traded blows with the “Tractor”. However, a late takedown sealed the victory for Prazeres who got the unanimous decision victory with all three judges scoring the fight 30-25 in his favour.

The opening fight of the main card pitted Rony Jason against Steven Siler in another all-TUF encounter, this time in the featherweight division. Siler kept his distance from the start and continuously landed kicks from the outside. Jason was undeterred by this and worked hard to close the distance.

The Brazilian stepped in and connected beautifully with a big right hand followed by a quick overhand left to earn the TKO victory after just 77 seconds. The referee’s stoppage might have been a little bit premature though, as he almost ate one of Siler’s up kicks when he intervened. Nonetheless, it was an impressive display from Jason.