Not too long ago European fighters stock in the Ultimate Fighting Championships was somewhat in the doldrums. With some hit and miss performances and low in physical numbers. At times it felt as though the weight of an entire continent fell on just a few strong shoulders.

Way back in the day, guys such as Michael Bisping blazed a trail for others to follow. In fact, even before that the now-disgraced Lee Murray was in there mixing it up with the very best. But that was then and it would be some years before the European fanbase felt that we might have a potential Champion in our midst. 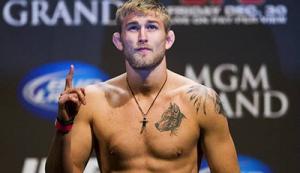 Step forward the blonde blue-ish eyed Alexander Gustafsson. With one loss in the UFC to Phil Davis, in September 2013 would challenge Jon Jones for the undisputed Light Heavyweight title. With a likeable personality, a good grasp of English and his physical aesthetics. Here was a guy who had marketability written all over him.

Gustafsson lost in his first attempt to take the belt from the LHW phenom. But would bounce back with a win over Jimi Manuwa. Gus looked like he would get another shot soon after, but it wasn’t to be. In 2015 he took on Anthony ‘Rumble’ Johnson on his own doorstep losing decisively. It looked like any title hopes would be put on ice, at least for now.

But with the dominant Jon Jones now out of the picture and DC holding the strap. It looks like Gustafsson will get his second bite. Will the Swede succeed where at first he failed? And reassert his status as one of Europe’s brightest stars.

Khabib Nurmagomedov Has Not Lost 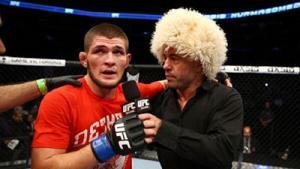 Having yet to lose as a professional Khabib Nurmagomedov, the Russian Eagle, (hey if we have to put up with their music in the Eurovision, then he’s a European) has been taking names since 2008. Now with a win record of 22 – 0, he joined the ranks of UFC in 2012 and hasn’t looked back since.

Unfortunately, he has been sitting out now for over a year, having missed his opportunity to fight Anthony Pettis for the lightweight title. The Eagle is surely one of the hottest prospects in the sport, end of!

Having already dispatched the current champion Rafael dos Anjos when the two previously met. For many pundits, it is only a matter of time before Nurmagomedov will hold the belt and may even get his opportunity before the end of 2015. With a combination of World-class Russian Sambo… potential kryptonite to American wrestling. And that cutting wit, exposed by his learning English. The sky really is the limit… if he could just avoid those big injuries. 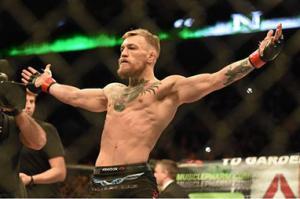 Roll on to one of the most highly anticipated fights, not just of 2015 but in recent memory. Reporting from Ireland you would assume that coverage would be skewed toward our very own. But to be fair it seems as though the rest of the world is as much enamoured, intrigued, infuriated by the man that is Conor McGregor.

Dispatching Marcus Brimage in just over a minute his UFC debut, McGregor has been on a roll and now finds himself at the featherweight gates. All he has to do now is get past their guardian Jose Aldo Junior. Ranked as the current number one pound for pound, who hasn’t lost since 2006. Aldo has been able to thwart all comers, standing as the only ever UFC featherweight champion to date.

Now whether you are in the love to see him win or lose camp, you want to see Conor McGregor fight. With his brash, bold predictions. Unwavering self-belief, talent and that Irish charm, just a smidgen. On July 11 at the MGM we get to see if he can live up to his own billing. If he can, then those visions will become a reality for the Dubliner and the world truly will become his oyster. 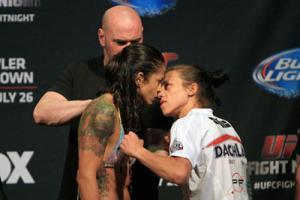 Not sure how many people saw Joanna Jedrzejczyk charging through to become the number one women’s strawweight, seemingly out of nowhere. Kinda like when you look in your rearview mirror and it’s all clear, look back again a second later and there’ she is all up in your face.

In just 10 short months the polish fighter went from being someone whom many were unfamiliar with, to holding the strawweight title. Albeit a division in its infancy. Yet we now have a champion who already looks like she will hold the belt for some time. Jedrzejczyk has dispatched each of her opponents with growing ferocity, handling the champion Carla Esparza a one-sided beating akin to a playground bully.

With world-class Muay Thai, nurtured under the tutelage of the great Ernesto Hoost and outstanding wrestling defence. Couple that with her supreme confidence, very unique staredowns and that special kinda something. And once again the UFC may have struck more European Gold.

Not so many years ago when those of us east of the Atlantic looked at the UFC’s America’s laden roster, may have been somewhat disheartened. But now more than ever before, it feels as though a new groundswell is well underway. How far can it go and how will the landscape of the divisions look 12 or 24 months from now is anyone’s guess.

But right here right now, at this very moment… from this side of the pond. It looks pretty damn good.