On the face of it, Rafael Dos Anjos is a huge loss to this event, but in practice, this remains at the top end as one of the most intriguing cards of the Conor McGregor era. As talented as the lightweight champion is, Conor is the ticket seller here. And though Nate Diaz is not at RDA’s level right now, we all know this is not a gimme fight. Any time you’re up against a Diaz brother you’re never going to have an easy night.

Nate Diaz is off the back of what could be the best performance of his career so far and is certainly up for this fight. The only thing scarier than a Diaz brother is a motivated Diaz brother. We really don’t need to talk about Conor McGregor any more, if you still don’t believe the hype then you’re either not paying attention or you’re a hater. We all know what Conor can do, and yes he will start as the favourite, but anyone who follows this sport can tell you that Conor McGregor has never seen anything like the 209.

It doesn’t feel fair that Holly Holm’s column inches are being so diminished by the star power on top of her. The first title match in over 10 years to be knocked off the Main Event spot by a non-title bout (since Tito Ortiz’s star quality topped the billing over Tim Sylvia vs Andrei Arlovski) is not the legacy that her UFC 193 win deserves. Nonetheless, the greatest performance in the history of WMMA has earned Holly the greatest risk to the undefeated record she has faced so far. Yes, Ronda Rousey is Better than Miesha Tate, look no further than two armbar victories for proof of that. 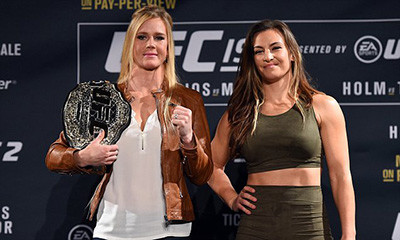 However whilst Ronda Rousey may have been arrogant enough to assume she could outstrike Holm, Miesha Tate will not be. Holly Holm has a target on her back now, and Miesha will be bringing 100% pressure, 100% energy and all kinds of hell in the form of takedowns and top control to try and knock that target off. Miesha is 4-0.

Having knocked off three top 10 opponents since the Rousey defeat, and sees her greatest opportunity for the UFC belt she clamours for. Whilst Cupcake may not be Ronda Rousey, this is as tough a fight for Holm, and as difficult an equation for Greg Jackson as Rousey posed.

When rumblings of RDA vs McGregor for the lightweight title first surfaced the general consensus was that it wouldn’t happen. The UFC wouldn’t allow the featherweight champ to hold two belts consecutively, as well as it sets a whole new precedent in the promotion. On top of all that, many believed that RDA would simply be too much at 155. Quickly fast forward a few weeks and the MMA world was again in somewhat disbelief as Mcgregor was now set to face stand in Nate Diaz at Welterweight.

With McGregor moving up yet another weight to take on Diaz at 170, not 165lbs. How far can the boat be pushed out before getting into difficulty? Welterweight is “a whole other ball game” to coin a phrase from the man himself. It’s anyone’s guess as to how Conor will look and handle carrying some 25lbs of extra weight.

Not too many fighters who have successfully bounced between 3 weight classes immediately come to mind! Anthony ‘Rumble’ Johnson, although welterweight really wasn’t for him. Vitor Belfort, who has gone from heavyweight down to middleweight and of course the great BJ Penn.

Although BJ went all the way up to light heavyweight to fight Lyoto Machida many moons ago. But you get my point? Moving up three weight divisions is not the done thing. It’s a risky business, even for a guy who supposedly walks around at 180 lbs. The vast majority of welterweights would easily top 200+ lbs on any given Sunday. How he handles a much bigger opponent will be fascinating, to say the least.

For Miesha Tate, this really must feel like a case of deja vu. Back for a third time in a title fight, Holly Holm winning against Rowdy was the best thing that could have happened to Tate’s career, as another shot under a Rousey, the reign was becoming a harder and harder sell. If she blows this third opportunity. Who knows when she may again be inline.

There’s only so many bites of the cheery one gets in this life and Tate has nibble that sucker all around the edges. Xtreme Couture will have to come up with something very special to take this from Team Jackson Winkeljohn.

In my opinion, Nate Diaz is the first opponent that hasn’t let McGregor get inside their head; which is an incredible accomplishment. As a Cesar Gracie black belt, Nate has a very high-level ground game, which might pose a problem for McGregor as we haven’t seen much from him on the ground (defended that choke from Mendes pretty well I guess…). Though, getting McGregor to the canvas might be difficult as Nate has trouble with this aspect of his game in the past.

McGregor, on the other hand, is a striking savage and might be one of the most athletically gifted athletes in the UFC at the moment. It will be interesting to see if his power will translate against a larger opponent, especially at 170lbs.

Diego Sanchez is the most intense human being on planet earth. In fact, if I were to guess, Sanchez does nothing without a high level of intensity, I’m talking eating cereal, walking the dog, watching a romantic comedy… Anyways, he hasn’t been in a boring fight since his debut in 2005 at The Ultimate Fighter 1 finale against Kenny Florian (whom he finished in the 1st round via TKO). To say the least, Sanchez is a very experienced fighter, though he will be facing Jim Miller, a veteran in his own right (21-6 in the UFC). With that being said, both seem to be on the back end of their careers as they each have dropped three of their last four fights.