You would be hard-pressed to find a fighter out there who doesn’t appreciate the skills and technical ability of Demetrious Johnson. Ranked number 3 in the UFC p4p list, Mighty Mouse the current UFC flyweight champion. Is on an 8 fight win streak which began back in September 2012. When he won the inaugural UFC Flyweight Championship against Joseph Benavidez.

Ever since then he has looked pretty unbeatable… except of course for his very first title defence against John Dodson in January of 2013. A fight which garnered both him and the challenger Fight of the Night honours. It was a close back and forth battle which saw Johnson getting rocked several times by the hard-hitting Dodson. In a fight which eventually went to a judges decision. It was the only real occasion since making the drop to flyweight in which an at least perceived weakness has appeared in Johnson’s unfaltering dominance.

Two and a half years on and the number 1 and 2 in the division are set to do it all again this weekend at UFC 191. As Dodson will look to do what no one else has and dethrone the flyweight king. With no love lost between the two, it’s a fight The Magician has been relishing since losing to the champ. 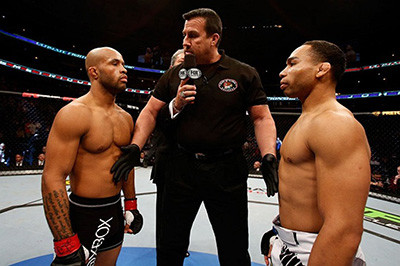 However, Dodson has been out due to injury for a large portion of the last two years and has only managed to complete a total three times. With three wins, since he last faced the champ. Most recently scoring a decision victory over “Fun Size” Zach Makovsky in May 2015. Now he is back to claim what in his own words is rightfully his and settle the score.

With somewhat of a bad taste still lingering since their last fight. Johnson will be looking to remove any doubt as to who is the number one flyweight in the world. Solidifying his position as one of the very best p4p fighters in all of mixed martial arts.

With both fighters professing that they are in the best shape of their lives, having had the best training cam of their careers, yeah I know! We can but expect fireworks when they once again meet inside the octagon for all the bragging rights. Don’t blink as two of the fastest fighters in the sport let it a hang out this weekend in the long-awaited rematch, UFC 191 at the MGM Grand Las Vegas.

Part-time surfer, full-time dog fanatic, Martial Arts practitioner. I’m trying to save the world, one fight at a time. Catch me blogging at FightNomads.com.