Feelings across Europe are that Duquesnoy’s plunge into the big time has been a long time coming. It would be widely accepted that the two-weight BAMMA world champion was ready for the UFC at least 12 months ago. But in reality, there couldn’t be a better time for ‘The Fire Kid’ to emerge from the flames of destruction he left behind him in Europe.

Known for his fan-friendly all-out war approach to fighting the French star carries with him a well-rounded arsenal of skills that will surely shake up an already booming 135lb division. The bantamweights are a herd of hard-hitting ferocious animals these days; just ask Dominick Cruz who lost his title in decisive fashion against the latest stud on the scene Cody Garbrandt.

Garbrandt faces former champion and former Alpha Male teammate TJ Dillashaw at UFC 213 this July in what should be a classic. Dillashaw lost the bantamweight crown to Cruz in a razor-close decision last January but has bounced back with dominating victories over Brazilians Raphael Assuncao and John Lineker.

Expect Tom Duquesnoy to quickly announce himself to the division on Saturday night. Taking nothing away from Patrick Williams but Duquesnoy’s preparation for this moment couldn’t have been any better. He’s undefeated in four years with that sole defeat coming when he was only 19 years of age at the hands of current UFC featherweight Makwan Amirkhani. 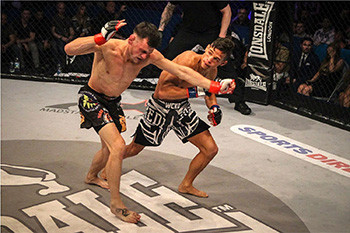 Since then he’s been on a blaze of destruction taking out opponents with an array of different finishes. Slick submissions over Teddy Violet and Alan Philpott, an aggressive flurry of punches to Damian Rooney and a stunning elbow to take the BAMMA bantamweight title from Shay Walsh.

What to expect inside the octagon

At still only 23 years old there is plenty of room for improvement in the young Parisian. But that’s not to say he isn’t already ahead of the game for his age after five years of competition. The first thing that stands out when analysing Duquesnoy’s skill set is his aggression.

He will walk forward, get inside his opponent’s range and isn’t afraid to exchange with them. However, this is calculated bravery on his behalf as he possesses a solid defence on his feet and can be deadly with counter strikes. Duquesnoy’s Muay Thai background is evident when watching him fight.

He is an expert in the clinch and often lands knees from this position in order to take the wind from his opponent’s sails as he sets them up for his type of gruelling fight. His clinch can also be fatal in a contest as learned by Shay Walsh when he was momentarily tied up before having his lights put out by an over the top technically beautiful elbow.

All the greats, especially in the lighter divisions, have a natural flow to their movement and Tom Duquesnoy is no different. Hand in hand with this is timing and his timing is impeccable whether it’s on the front foot or back foot. An example of this came at BAMMA 18 against Polish fighter Krzysztof Klaczekd.

‘The Fire Kid’ had to endure a difficult first round against a solid opponent but the deeper the fight went the more Klaczek began to wear down. Duquesnoy’s fluid movement eventually became too much of a conundrum for Klaczek as he had an answer for everything the big Pole threw at him.

In the final round, he grasped the momentum and turned on the style big time. Moving through the gears he oozed confidence and began to land some lovely shots. The end came when a desperate Klaczek threw some tired punches which Duquesnoy rolled with, sneaked inside and landed a perfectly timed knee to the liver that crippled his opponent.

That fight was at featherweight and one of three defences of the BAMMA featherweight title. Tom Duquesnoy is by no means a big bantamweight and we have even seen similar frames to his compete at flyweight. This gives you an insight into just how special this young fighter could become.

The last European to hold two world titles before crossing the pond to the bright lights of the UFC has did pretty well for himself. There is no reason why Tom ‘The Fire Kid’ Duquesnoy can’t go all the way to the top as well. Especially now as he is training under the guidance of world-class coaching at Jackson-Wink MMA.

The evolution of this fighter is by no means complete and who knows what can happen in this crazy sport. But one thing for sure is that whatever happens in the remaining career of ‘The Fire Kid’ we are going to be entertained watching it. Beginning this Saturday night.