Aside from the long time coming rematch between TJ Dillashaw and Renan Barao, Fight Night Chicago has a pretty good lineup instore. Sandwiched between the hotly anticipated UFC 190 and a previous hectic week, which saw no less than four cards over a seven day period! UFC Fight Night Chicago has somewhat flown under the radar. Here’s the meat and veg of the card with a selection of just some of the fights to look forward to…

He faces Bryan Carraway, yet another product of the TUF series who has also had a very mixed bag during his tenure with the promotion. A number of setbacks and injuries have meant that Carraway has never really had a clean run to show what he may be capable of. With a win over Wineland and a current number 12 ranking. Can Kid Lightning break that top 10 and make a run? We shall have to wait and see.

Jim Miller  takes on Danny Castillo in a lightweight bout, with both fighters coming off two straight losses. Miller has been competing in the UFC since 2008 and at one point looked like he had all the tools to challenge for the belt. Scoot forward a few years and alot has changed as Miller is now nowhere to be seen near the top fifteen.

With that being said, it is probably Castillo who faces the chopping block this weekend should he lose. At 35 and with recent losses to guys who are becoming established fighters in their own right. Will this be Castillo’s the last call? 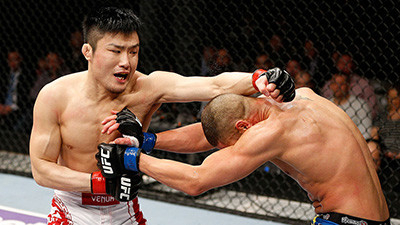 It’s universally accepted that Joe Lauzon is a fighter everyone likes to watch. Win, Lose or draw, J-Lau always brings his A game and exciting fights for the fans. This weekend he meets yet another exciting fighter in Takanori Gomi.

Gomi is pretty much a legend in the sport and has been fighting professionally since way back in 1998! Now that is a long time and in the fight game and at 36 and with no current ranking, this fight is really just one for the hardcore fans. Expect fireworks when the Fireball kid meets J-Lau in the centre of the octagon.

Coulda, woulda, shoulda are verbs which spring to mind when you mention Edson Barboza. A muay thai ko machine, he went on a tear when first entering the UFC before losing for the first time in his professional career to former WEC champion and all-round tough guy Jamie Varner. Just after that win Varner commented “I just beat Edson Barboza”. Just goes to show you the level of expectation fighters themselves had for Barboza as many viewed the Brazilian as championship material.

At Fight Night Chicago he faces a young hungry undefeated up and comer in Paul Felder. A long time training partner of lightweight contender Donald Cerrone. 10 – 0 Felder has looked outstanding since joining the UFC. A win over a top 10 name like Barboza will do big things for the Irish Dragon. If some of Cowboy has rubbed off, we should expect a great performance come Saturday night. 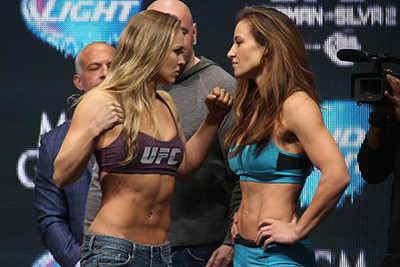 Miesha Tate wants to be back in contention and get her third shot at Ronda Rousey. Standing in her way is Jessica “Evil” Eye who is looking to put a stop to any plans Tate might have and establish herself as the next challenger in waiting. If Tate takes it, then any fight with Rousey is sure to be her last for a long long time.

So she either shows up and makes her case as Rousey’s number one threat or succumbs to Eye, who will then have her first go at the winner of UFC 190’s main event. Alot to play for as these two ladies step inside the cage with a whole lotta pride at stake. With no love lost, expect both fighters to bring it and make it an exciting number one contender eliminator.