In any relatively sane universe, TJ Dillashaw defending his bantamweight title against the former long-reigning champion Renan Barao would feel like a massive fight. But something about this rematch just doesn’t feel right. The pairs first encounter was one of the best fights in recent memory with TJ Dillashaw’s dominating performance, going down as one of the very best ever seen inside the octagon.

So why no fanfare? Is there any particular reason for the fight having been relegated to that of a lesser Fight Night billing? It all just feels a little strange and a bit underwhelming. True Barao didn’t look quite himself when he took on and for that matter beat Mitch Gagnon last December. On the surface at least he didn’t quite look like that same guy who had been tearing through opponents since 2005.

How much the loss to Dillashaw affected him mentally is anyone’s guess. But for such a dominant champion to get beaten in such emphatic fashion. It must have knocked Barao for six! And let’s not forget the physical toll that fight must have taken. 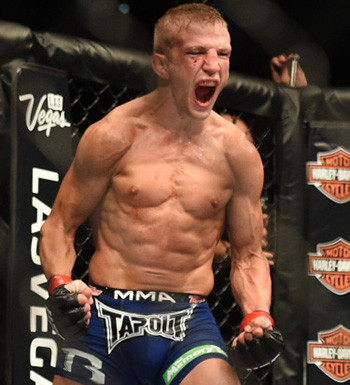 When Barao was scheduled to rematch the following August. The MMA media took a collective gasp at the quick turn around. He was severely beaten in that fight, we’re talking hospital time.

And for him to go straight back into another camp, screamed of desperation from the UFC who were looking to cash in and Barao himself. No longer holding that belt seemed too great a pain to bear, rather than taking some time out and rebuilding himself, mentally and physically.

With both fighters having pulled out of two dates, UFC 177 & UFC 186. This rematch has now taken some 14 months to come to fruition. It almost feels like there is an air of… I don’t know, how do you define “ho mum”. As though a degree of disinterest has crept in, while the fans ever-demanding gaze has been redirected to newer, shinier things…

The attention span of fans can be very short-lived. But that doesn’t mean anyone should sleep on this fight. Are the fans in for yet another unexpected classic or will Barao’s attempt to retake the belt from Team Alpha male end in the same fashion as their first encounter. We find out this Saturday at UFC Fight Night in Chicago, no numbers people.