Tim Murphy is one of Ireland’s most accomplished Jiu-Jitsu practitioners. Having recently got podium finishes in both the No Gi Pan Am’s and No-Gi World Championships 2014. We wanted to chat with him about not only those successes, but also the current state of the sport in Ireland. Although still very much a niche sport, Jiu-Jitsu has seen a huge explosion in popularity along with Mixed Martial Arts. We wanted to hear his views and get his insight into the sports burgeoning popularity.

And how a guy from just outside Tralee in Kerry, gets into and becomes one of the very best in the world?

Ah, I don’t know, I started grappling I suppose, back in UL (University Limerick) in the university, we were running a kickboxing club back there in the day. And myself and David Donovan, we just started getting into watching UFC and that.

Then we started training a bit of grappling, kinda mucking around with DVDs. Like a lot of the way, the first and second-generation Irish guys got into MMA and Jiu-Jitsu. Starting off with DVD’s, playing around and trying to figure stuff out. Kept it going from there really.

So you didn’t have someone even showing you, to begin with?

Am, no no, not at all, my first coach was Matt Thornton DVDs. A DVD box set I bought somewhere online. I’ve had loads of like, coaches over the years. But a lot of it was self-trained and then going trying to train with people better than you when we get the chance. So we used to get John Kavanagh down doing seminars and go up the train with him. And we used to go training with Fergal Quinlan as well, he’s a jiu-jitsu black belt as well. He would have been just a blue belt at the time when I started.

I’m presuming the Jiu-Jitsu scene is quite small in Ireland.

Oh yeah, we all know each other pretty well. So my club would be part of the BJJ Revolution. The two main people involved in that would be Andy Ryan and Fergal Quinlan down in Limerick. We’ve had them down several times doing seminars in our club as well.

What’s your opinion of the whole Jiu-Jitsu scene in Ireland at the moment? It all seems to be very much MMA focused.

I suppose in terms of the media it’s always going to be. Like MMA is a spectator sport and Jiu-Jitsu isn’t really. Jiu-Jitsu is getting big in the country now as well, compared to say five or six years ago. I mean it’s gotten an awful lot bigger, there’s a lot more really good guys, there’s a lot more black belts, brown belts you know. So it’s exploding really, the amount of clubs in Dublin is crazy now compared to what it used to be.

They’re used to be only two or three clubs and no one really knew about it, bar a small number of people in the scene. But, like the way MMA has grown, Jiu-Jitsu has grown massively as well you know. I suppose it used to be a case where nearly all of them, well not all of them, a lot of them were MMA and Jiu-Jitsu. And whereas now we’re seeing a lot more that are just dedicated Jiu-Jitsu clubs. That’s a good sign as well.

So what’s your opinion on the coverage to Jiu-Jitsu gets in Ireland at the moment? You just got a Silver in the No-Gi World Championships.

Yes, Silver in the No-Gi World’s and the one before that was the Pan Am’s. In the No-Gi Pan Am’s as well, that was in New York. And then the Worlds were in California.

Did that get much coverage in the National papers? 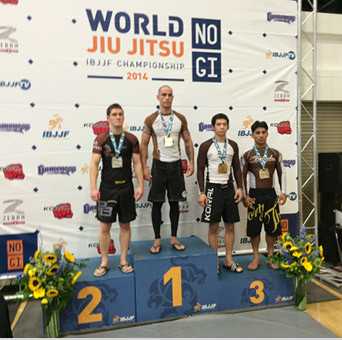 No no, not really. Last year I won the Gold medal in the No-Gi Worlds as well. We get some local coverage. I had a few pieces in a few of the local papers around Galway and in Connaught.

And there was an article in the Kerryman and down-home as well. But I mean that was it really, that’s what you’d expect really.

People I think sometimes. If your in the MMA community or the Jiu-Jitsu community. Or whatever other community you’re in, that’s what you see on your Facebook page when you log in. And I think sometimes people can get a kinda false impression of how big a sport is.

Jiu-Jitsu is still a very small sport in this country compared to other sports. So you are never going to get massive coverage for something like that. Right or wrong that’s the way the world is I don’t really feel that changing.

I couldn’t tell you. I didn’t find the club. So point blank submissions would have been the original name of the club back when it was founded in NUIG. I don’t know how long ago that was, 10 years or more. You would have to ask them. I took over Point blank I think it was about three years ago. And I have just kept it on from there, but it wasn’t originally my baby. It was Mark Leonard and Vinny Connelly back in the day and so we kinda just kept that name going.

So Catherine Costigan has been coming up to train with you. What did you think of that armbar finish in her last Cage Warriors fight?

That’s what her opponent gave her. When she got the takedown, she went straight into mount. And then the girl gave up the armbar relatively easily. It was kinda surprising that she gave it up. Catherine put on the armbar pretty quick. So she did a really good job on that and you’re one didn’t really want to tap.

So it was a bit of an unusual one. But Catherine did really well, she was cool and collected about it. The girl kicked up a bit of a fuss. But I don’t think she had really much to complain about, to be honest.

As regards your own MMA future you’re an eight and three featherweight. Do you intend going back into MMA at any point or are you sticking with the Jiu-Jitsu.

I’m not sure, I’m coaching a lot these days a lot so it’s hard. It’s very hard to be a coach and a competitor at the same time. Especially with the way MMA is going. So many guys training at a high level. It’s not like back in the day. So I’m not sure. It’s difficult when you’re trying to coach as well and train at the same time. Maybe I will, but maybe I won’t, I’m not really sure. But you know, no MMA fighter is ever really retired.