“He’s one of two people who have won two titles in two different weight classes. He built the 155-pound division. He’s a legend, he helped build the UFC, and the list goes on and on of what B.J. Penn has done.”

A modern legend of the sport, BJ Penn helped lay the foundations for the UFC in its formative days. Frank and Lorenzo Fertitta, along with lifelong friend Dana White purchased the UFC in January of 2001. Just a few months later, BJ Penn made his debut.

A well-known figure in the world of Brazilian Jiu-Jitsu, Penn earned his black belt from Nova Uniao coach Andre Pederneiras in the year 2000. He would later become the first-ever non-Brazilian to win the black belt division at the Mundials. Having previously medalled in both the Brown and Blue belt divisions in previous years.

Penn, who was Dana White’s Jiu-Jitsu coach prior to purchasing the UFC, was high on his priority list. Penn quickly dispatched Joey Gilbert and then Ricardo Liborio black belt Din Thomas.

Both with first-round knockouts. This earned ‘The Prodigy’ an opportunity to compete in a title eliminator. Where he would knock out Caol Uno in an astonishing 11 seconds to earn his first UFC title shot.

Though he would lose to Jens Pulver in that instance, he would gain another chance just 13 months later. BJ would this time draw with former opponent Caol Uno. A result that led to the Lightweight championship spending the next 3 years in limbo, as the UFC suspended the division.

Penn briefly departed, winning the Rumble On The Rock championship by defeating Pride superstar Takanori Gomi. BJ would make the first of many comebacks to the UFC in 2004.

When he stepped up to Welterweight for his first fight with eventual rival and friend Matt Hughes. In a stunning upset, Penn submitted Hughes in the first round, winning the UFC 170lb title and ending the most dominant title reign the UFC had seen up to that point.

A lethal BJJ black belt who was dangerous on the feet, BJ Penn was the first of his kind. Something that unsurprisingly led to a great degree of competition for his services. Penn would sign an exclusive deal with K1, citing a lack of challenging fights in the UFC. A short but bitter feud with Dana White followed where BJ controversially revealed the finances involved, among other things.

How much of that to be believed is still up for debate, but the interest in BJ’s time in Japan certainly isn’t. Wins over Duane ‘Bang’ Ludwig and Rodrigo Gracie preceded an astonishing bout against Lyoto Machida. Penn would lose a unanimous decision in a bout where he weighed at a career-high 191 lbs. Which was still an incredible 34 pounds less than Machida! 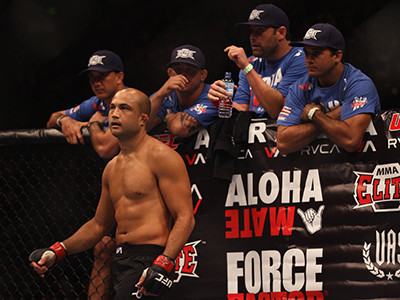 Despite a successful run in Japan, the world’s greatest talent always clamour for the world’s biggest stage.

A reconciliation with White led to another Prodigy come back to the UFC, whereupon he was edged controversially by George St. Pierre.

Penn would nonetheless go on to compete for the title anyway, where former foe Matt Hughes’ would control the fight with his wrestling and force out a 3rd round stoppage. This would prove to be the Hawaiian’s last fight at 170lb for 3 years until he accepted a chance to gain revenge over St. Pierre, with whom he had built quite a rivalry.

In a highly controversial bout, in which GSP and his corner were accused of applying grease to the French-Canadian’s arms and shoulders in between rounds ensued.

After struggling for the first round, GSP would proceed to take Penn down at will for the remainder of the fight and dominate from top position. With BJ’s corner stepping in to stop the fight at the end of the 4th round. 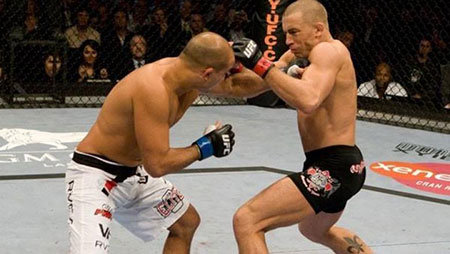 In the time between the two Welterweight title bouts, Penn would resume control of the 155lb division.

A win over another heated rival, Jens Pulver (after a brutal season opposite the former champ on TUF 5) would set up another title challenge. BJ regained his belt with a win over TUF veteran Joe ‘Daddy’ Stevenson, before knocking out Sean Sherk at UFC 84.

His undefeated run at ’55 would continue by dispatching a couple of TUF 1 veterans in Kenny Florian and Diego Sanchez in quick succession. But it would prove to be the beginning of the end for ‘The Prodigy’. Two retirements, three weight divisions and a 5-1-1 run including three defeats to Frankie Edgar would be the story of BJ’s career from then until now.

A shaky comeback at 145 amidst a dispute with weight cutting guru Mike Dolce had his legions of fans hoping that his latest retirement would be final – however. In true Prodigy style, it appears there may be one last run on the horizon.

Making A Comeback At UFC 197

Penn announced his desire to return to active competition, with many pointing to his long-standing beef with UFC stalwart Nik Lentz as a possible opponent. Penn had a fight booked at UFC 197, however, the Hawaiian may have run into a storm he cannot overcome.

Allegations of sexual assault from a former business partner. Insinuating that Penn forced himself on his website’s former head Alex Carrasco’s girlfriend, has forced the UFC to postpone his comeback.

Although new information may cast a cloud upon an MMA legend, BJ Penn is a fighter worthy of all the respect and accolades possible to bestow on him. As is mentioned in the opening quote, his legacy is secure.

An icon of the sport, one of the first great non-Brazilian BJJ greats. One of the only two-weight world champions in the history of the UFC and a true pioneer of the Lightweight division. BJ Penn deserves to go out on his own terms, but let’s hope he does it with dignity.