Ronda Rousey, Thank God there is Only One

Ronda Rousey is the biggest star currently in the UFC, there is no question about it, she is a superstar. I cannot say enough good things about the Olympian but thank god there is only one of her. Because what the UFC is putting on out screens would suffer if there were more stars with the same power.

The UFC has, in the hope of pulling big gates and huge pay-per-view numbers. Gone above and beyond lately in stacking cards to the brim with incredible match-ups and must-see fighters. This is evident with cards such as UFC 189. I think we all can agree that it was one of the greatest UFC PPV’s of all time if not the greatest. What’s more, we seem to be getting something very similar coming in the shape of UFC 194 which has the early potential to be bigger.

Now compare 189 to 190 and it’s not pretty viewing for 190. It loses out at every level to bigger names, except for Ronda, and better match-ups. The reality of the matter though is this counts for nothing as UFC 190 outdrew 189 in PPV buys, with a vastly inferior card, all due to Ronda. She has this ability that the UFC craves, she brings people in regardless of the quality of fights behind her. On every level 189 should have smoked 190 but this counts for little when a mainstream star like Ronda comes along, but she was not the first. 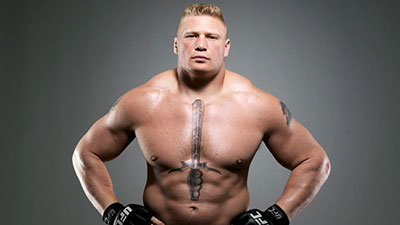 The giant man was one of the last superstar’s to have had this power to make people tune in. Regardless of who he was fighting and who was on the undercard, people tuned in to see Brock Lesnar.

Two of Lesnar’s biggest cards UFC 116 and 121 were by no means “stacked” cards. 116 was co-mained by a Chris Leben vs Akiyama and 121 by Jake Shields vs Martin Kampmann. Neither fight is very intriguing and is more suited to be the opening bout of a PPV rather than the co-main. But it counts for nothing because, like Ronda, fans only wanted to see Lesnar. And both of these events topped the one million mark on PPV’s and both are in the top five UFC biggest ever PPV’S.

Ronda works off the same blueprint as Lesnar, she does not need a huge card behind her to bring in massive numbers. And that is why the majority of her cards are thin and not very appealing to hardcore fans. The UFC would of course love to have more fighters with her star power but for us fans, it’s good that they don’t.

All is not doom and gloom, rejoice because there is only one Ronda Rousey and even though the UFC would love to have more like her they don’t. So get used to more and more cards such as 187, 189 and now 194. Double title fights and stacked cards seem to be the UFC answer to a lack of superstars and that’s just fine with us.