Another week another event and this time I just had no interest. I kind of wanted to relax from MMA for a few days. Which makes coming up with something on deadline day, a bit more difficult. Someone sent me a link to Joe Rogan talking about Jiu-Jitsu and the experience people would have if they got into an altercation with someone who was well versed in the martial arts.

These blogs are read by various different people. Some who are professional MMA practitioners, some who coach all around Europe, some who train religiously but aren’t quite at the top level yet, some who train regularly to keep fit and the lads who will never train but think they could smash up everyone they see.

I thought I would recount sparring, and how I find it every time. To explain a little bit, I would classify myself as ok at kickboxing. There are different grades starting with beginner, then you graduate to being bad, then good, then very good and then you get to be one of the top 5 in the class who are always very good.

Every club or dojo will be welcoming to new people when I started everyone was great at showing me things and never taking advantage of my newness. I would advise anyone who wants to train but is worried about it to just go and check it out. You will love it.

It All Ends In Sparring

Every session finishes with sparring. We pair off and that changes at the end of each round. Aiming to get 10 rounds of 3 minutes in without stopping. The first few rounds are ok. You are warm and loose. I am usually grand until round 5. It is the second half that makes me want to crawl into a hole and die. And this is what I wanted to talk to you about. 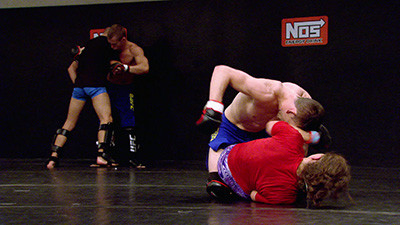 Initially the normal things happen, the arms and legs start getting heavy. I also start to hear my own breathing from round 5. The first time I thought it was a constipated elephant in the corner of the room trying to pass a Toyota through its lower intestine.

But no! It was me. The end of round 5 is tough. I start having difficulty catching my breath, and all the while, there is someone trying to kick me. Not hurt me, but just to let me know that he (or she) is able to kick me whenever they want to.

Ding ding, into round 6 with a 45-second rest. The big test is to stay on my feet. I try to get my arms in the air and open up my lungs to get as much air in there. I am also concentrating on not doing the opposite of the constipated elephant in the corner.

Usually, by fluke I end up with the better people in the class for the last few rounds. They do not have the same near-death issues that I have when the end of sparring is insight. So they are moving faster than the people I start with. In round 6 I get a rush of adrenaline, it is getting more serious now.

Not Being Able To Breathe During Sparring

The hits are a tiny bit harder so I have to react. For that 6th round, I get my act together and I can concentrate and basically forget about my body starting to pray to the various gods that are out there…

Into the last round and I legitimately can’t breathe in. I can’t lift my arms past my belly button and my legs feel like I am being offed in a mafia film. Lead boots. But I have to finish. This is how I imagine it is to drown. When people talk about seeing the top of the water get further and further away. And that is how I feel. So weak, so tired and with no idea how to get through it. All I can do is keep trying to throw something at the person opposite me. It hurts in a non-painful way.

Then the bell rings and it is a struggle to stay upright.

This may sound horrible to some people but when that final bell goes it feels fantastic every time. It hurts but I got through it. Everyone at the end claps hands with each other as a well-done kind of thing. No one got hurt and the people who didn’t finish got a little bit further than they did last week.

This is why you should bite the bullet and go train, you won’t regret it. Next week it’s back on to MMA trail of superb opinion. And if any gyms out there have any free passes they’d like to give away to your humble blogger, then I am willing to spar anywhere.