Hands up if you were one of the few who gave Rose Namajunas a chance in her quest for the UFC strawweight title? When Thug Rose faced the ultra-dominant division champion Joanna Jedrzejczyk at UFC 217. It was obvious that very few were giving the young upstart much of a chance at all!

Transfixed by Joanna’s uber-confident, almost to a fault, demeanour. Coupled with her unbeaten record inside the cage. It’s was a brave man or woman who was going to bet against the reigning strawweight queen.

Rarely in the fight game to we see such a contrast in personalities during a pre-fight build-up. While Joanna attempted to impose her will and mind games throughout. Rose maintained her own typical quiet and calm demeanour. Which only made Joanna’s antics seem all that more outlandish and over the top. 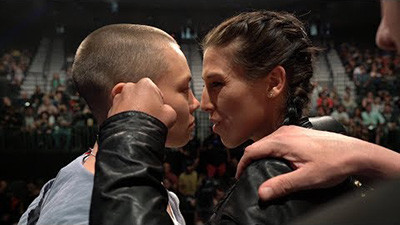 And the harder she tried, the more Rose’s calmness in the face of an all-out onslaught. Seemed to get under the champ’s skin, forcing her to raise the volume yet another notch on the dial. It was almost as though Rose had an invisible cloak with which to deflect JJ’s jibes and physical aggression.

When fight night finally came along. You really were quite unsure of where exactly either fighter was mental. While Joanna stalked, Rose remained resolute and in her own little bubble. Blocking out all the nastiness and negativity, through what we later found out to be “The Lords Prayer.”

Vengeance is Mine Saith The Lord

And now, with all the mind games and expectations aside. How could it be possible for the second fight to live up to their first outing? With Joanna having emptied her entire toolset of mind games, being laid bare for all the world to see. How can she deal with an opponent who from the outside, simply does not fear her?

Would a resurgent Jedrzejczyk with her super-aggressive style, have what it takes to overcome the new queen of the division? Can she muster a gameplan outside of the mind games, which will offer her a window to the winner’s circle?

Just a few short months ago, many including JJ herself! Believed that she would retire from the sport unbeaten. That she would ride the wave of greatness all the way to its inevitable conclusion. That she would establish her right to be considered in the Mount Rushmore of MMA greats. And who knows, should she return to the top in decisive fashion and continue her reign unabated. In some years from that could very well be the case.

UFC 223 will decide a great deal and could very well forever change the course for both fighters lives and careers. As so many championship fights have done before. Will it be a case of Salvation or Vengence? In the end, only one will have their way.