Welcome to part 2 of our Ronda Rousey retrospective.

At 21 years of age, Ronda Rousey hung up her judogi and made the jump to MMA. She worked to adapt her grappling with the Hayastan MMA academy. Of course, her judo wasn’t going to cut it alone, so she needed someone who could give her those hands.

She chose the man, the myth, the legend, Edmond “I believe I can beat Jose Aldo” Tarverdyan. Where does one begin with Tarverdyan? We’ll circle back to him, but I’ll just say that his influence over Ronda over the course of her career can’t be understated.

Ronda started as she meant to go on, going a 3-0 as an amateur. Those fights all ended via armbar and lasted a combined 104 seconds. She turned pro and took a couple more arms before signing with Strikeforce.

To select an MMA career as a woman was a bold proposition. It is for anyone, but at the time women weren’t even in the UFC, and Dana White had publicly stated he would never host a female fight. Make no mistake, when Ronda Rousey declared her intention to become an MMA fighter, she was not chasing glory or fame.

She was instead fuelled by nothing more than a thirst for competition. In the latter stages of the 2000s, Gina Carano and Cris Cyborg made some waves, but it was still not enough to break into the mainstream. When Rousey made her debut in Strikeforce there was little promise of prosperity. 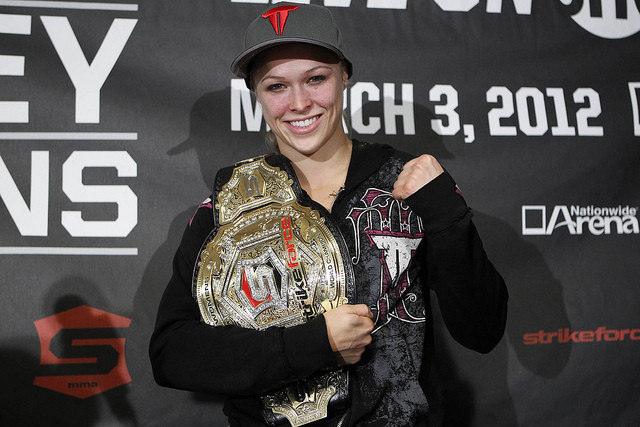 Nevertheless, she pushed on. After two more armbars, she earned herself a shot at Miesha Tate’s bantamweight championship. Rousey again applies the armbar, this time nearly ripping Tate’s arm off. After a title defence, Rousey met Dana White in Las Vegas and took the opportunity to plead her case for women in the octagon.

As Dana puts it “Fifteen minutes into a 45-minute conversation, I was like, ‘Holy sh*t, I’m in. If we’re ever going to do it, this is the woman to do so.’” Ronda was passionate and laid her plans for domination in her division. Thanks to her recent performances, Dana’s mind was changed, and women about to fight in the UFC.

After Strikeforce was dissolved into the UFC, Ronda was immediately promoted to the undisputed champion. Her first fight in the UFC would be a title defence. Rousey had already figured out her formula, and it would continue to work in the UFC for her next six fights. Barring one three-round outing against her nemesis Tate, she would take care of business in the first round.

Beyond leading the charge for women in MMA, she was a mainstream hit, becoming their most visible attraction between 2013-2015. She would appear on talk shows, at awards shows and even showed up on the silver screen, featuring in films such as The Expendable 3 (2014) and Furious 7 (2015).

This wasn’t a superficial push by the UFC promotional machine, the people wanted to see Ronda Rousey. She broke a million pay per view buys in only her second outing in the octagon against Tate. After Lesnar made his exit.

Rousey was the face of the brand, an even greater accomplishment considering she was the first woman ever signed to a UFC contract. Dana White has likely never been happier to be wrong.

With sweeping success comes hyperbole though. After such a period of supremacy and the subsequent creation of a larger than life persona, it becomes difficult to separate the two. Who can forget Joe Rogan’s serenading at UFC 190? “It’s an honour to call your fights. It really is.

You’re the best ever. You’re a true once in a lifetime human being, and I just wanna tell you I’m just beyond honoured to call this fight.” He would later go on to say he believed Rousey could compete with a number of male bantamweights. We love you Joe, but good grief. To be fair, he has fully admitted to indulging in a spot of Kool-Aid. 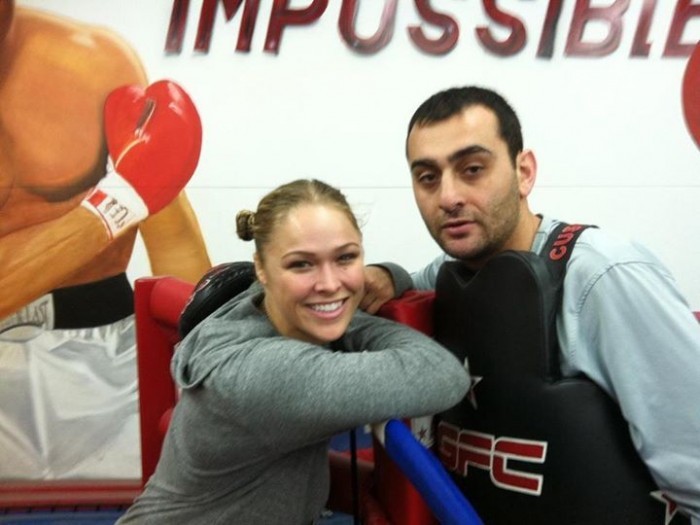 Not only did Ronda have to contend with this external commentary, she had her own in house cheerleading to score her career. Edmond Tarverdyan was the hype train conductor and would take any given opportunity to praise Ronda to the high heavens.

In a fit of particular sycophancy on the Joe Rogan podcast, Tarverdyan proclaimed Ronda’s ability to “destroy” boxing world champions on “any given day”.

Rousey herself was not one to moderate expectations of herself. She basked in the aggrandising assertions. Her behaviour ran parallel with the noise.

She talked copious amounts of trash, got aggressive in faceoffs and refused handshakes after fights. Finally, Ronda Rousey was atop a peak in MMA that she simply couldn’t scale in judo. The world was hers.

On November 15th, 2015, in Melbourne, Australia at UFC 193, Ronda Rousey stepped into the octagon to complete seventh title defence. Her opponent: Holly Holm; as luck would have it, a multiple-time world boxing champion. Correct me if I’m wrong, but November 15th, a Sunday in Australia, was in fact “any given day”. 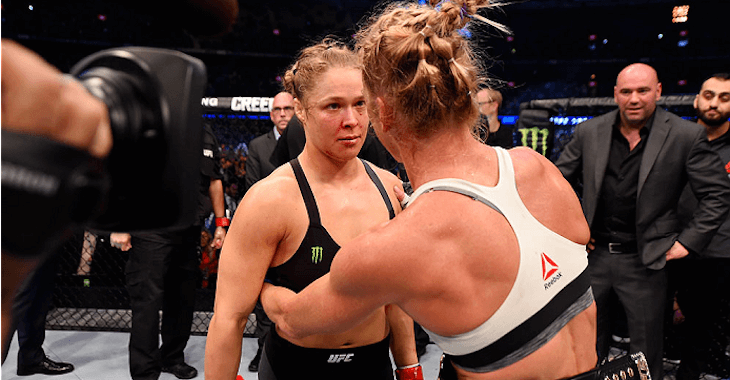 Ronda Rousey was dismantled by the world-class striker Holm. The champ found zero success and chased Holly around the octagon while Holm picked her apart.

Eventually, in the second round, Holly ended Ronda’s night with a head kick and took away her precious UFC belt.

The higher you climb, the further you fall. Ronda had slipped down crevices in the past and taken it hard. A plummet from the mountain top was seemingly unimaginable for her. She was quiet for a while but eventually re-emerged.

During an Ellen appearance in February of 2016, the topic of the Holm fight was eventually broached by the host. Ronda’s entire demeanour changes. Despite the hair, makeup and expensive dress, the memory stirs up a primal sensation in Ronda. Beyond the hype, this is the real Ronda Rousey; in this very moment, pure and undiluted.

Eventually, tears burst through the dam, and Ronda was reduced to an emotional wreck on live television. Once more she was that teenage girl who curled up in the stands in Brazil and cried her heart out. She relayed her immediate thoughts after the loss: “what am I if I’m not this?”.

After years cultivating an identity – an identity she never had in judo – she was no longer the unstoppable phenom. She was just Ronda. She famously talked about her suicidal thoughts during this interview. Many people have attributed this to a weak mind and a symptom of a derailed hype train. Maybe, or maybe this is reductive. 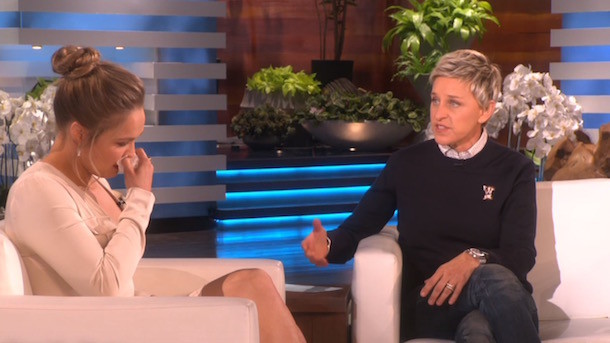 When Ronda Rousey was 8, her father committed suicide. A detail I left out earlier, but one that becomes most important when consolidated with Ronda’s response to the Holm loss.

It’s easy to point to a bad attitude, but depression runs in the family. Ronda had filled her life up to this point with competition and physical self-improvement. She had finally reached the athletic Holy Grail and had it violently snatched from her.

Suicidal thoughts are not a choice, they are a symptom. In the grand scheme of things, losing a competition is incredibly unimportant, but when you define yourself by some definitive thing, depression is very much not an uncommon reaction to the inverse.

Rousey took a year off, did some acting, hosted Saturday Night Live, then in December of 2016 she returned to the octagon. How would she have learned from the loss? What would she bring in to her game to compete with such an evolved fighter in Amanda Nunes?

The answer to both questions is nothing. Rousey took a thorough 48 seconds drubbing at hands of the “Lioness”. After taking one punch, Rousey stiffened up and offered no defence to Nunes for the rest of the minute. 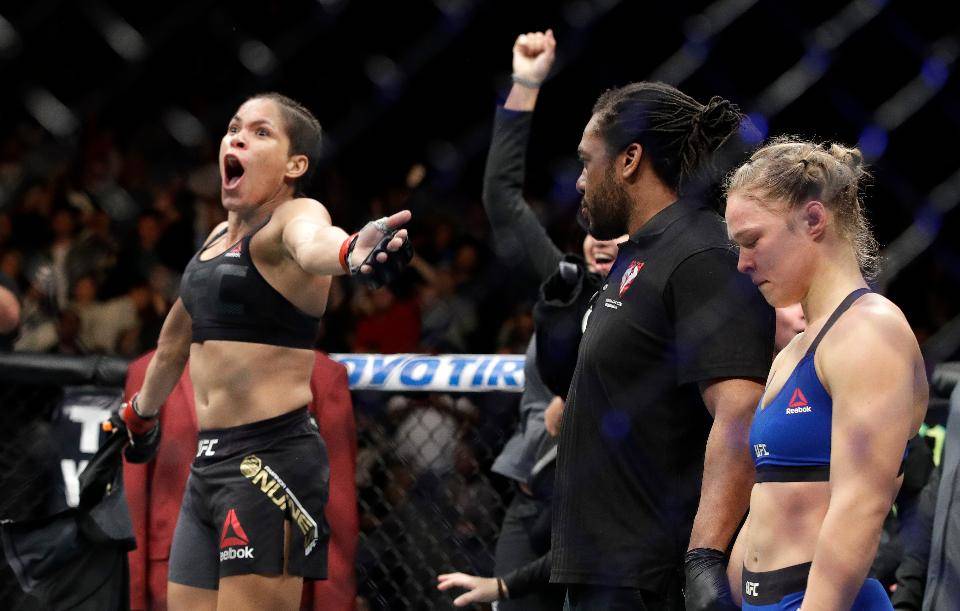 Who is to blame here? Is it Ronda? I don’t believe so. The loss to Holm clearly did something to Ronda, something she couldn’t work through on her own, which is completely okay.

I believe the blame lies elsewhere. The UFC should not have put her in there with a killer like Nunes after a year off. According to Joe Rogan.

The new owners were taking it for granted that Ronda would come back stronger and reassert her dominance because she was their star. This is fighting, this isn’t the movies. If you don’t have the right people around you, then you aren’t destined for a redemption arc.

Ronda had Edmond, and Edmond does not seem to have the tools to train fighters at this level. If you need more evidence of this, look no further than Travis Browne’s career. After finding success at Alliance and Jackson’s he decided to move to Glendale with Tarverdyan. His career took a nosedive.

Now Ronda will barely even acknowledge her fighting career, and even when she does, she refuses to speak clearly on her thoughts. Now performing full time for WWE, a company she has been passionate about her whole life, she is finding a new passion to pursue. No one will drag her backwards; a clean break.

It’s important to remember that Ronda isn’t merely a cautionary tale for hype jobs or a tool for female empowerment, she is a human being. She has flaws and makes mistakes. Rousey did not handle her losses well; that’s who she is. She spent a lifetime trying to live up to her Mother’s standards, and when she finally got there she felt it taken from her with such a heavy heart. 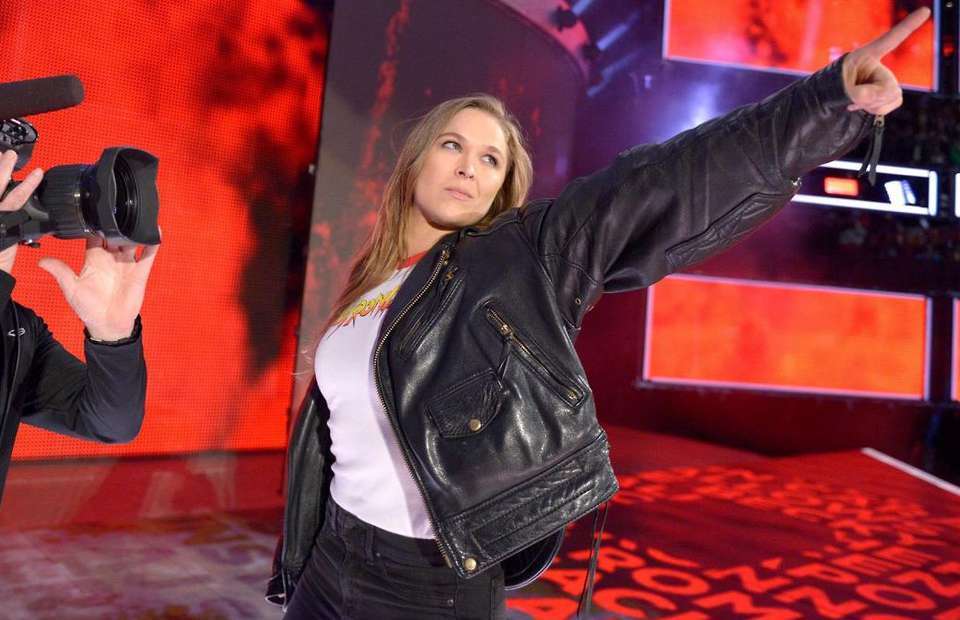 Ronda spent her infancy unable to express herself or communicate, it was easier to just do. Now she finds herself doing, not wanting to explain or exposit, crying when forced to.

Whatever you think of her or her faults, you cannot take away what she did for women in sports, particularly MMA. After the Nunes fights Dana White told her “You built this.

This doesn’t exist without you.” You know what, he’s absolutely right. Ronda deserves all the credit for what she’s done.

Could she have lasted longer at a higher level with better coaching or a different outlook? Perhaps, but she didn’t. She had the career she had; a trailblazer and a pioneer. She deserves to be celebrated now, not dragged backwards. I wish her good luck in her pro wrestling career.