Rhys McKee – One Life One Chance

Rhys McKee fights as an amateur mixed martial arts fighter. At eighteen years of age, he has already amassed a record of (5 – 1), and will add another one to that when he meets Gordon Armstrong at UXC Fight Night – Road to the Odyssey, this Saturday night 2nd August. We chatted with Rhys about his love of football, his transition into MMA and how he hasn’t looked back since.

“Ever since like I was ten I was obsessed with football and soccer. Then one Summer, I’d a friend who was down the MMA club and I said I’d like to do it and my brother wanted to do it. So I kinda went along just to get fit and a couple of weeks in I realised I rather do this and never went back to the football and I’ve been at MMA ever since.”

Having never previously been involved in any type of combat sport. It felt like a weird transition, but from the word go he was hooked. Like so many others, Rhys was introduced to martial arts through watching VHS tapes of Jean Claude Van Damme. So is his fighting style influenced by the famous Belgian Kickboxer?

“I’ve two wins by ground and pound stoppage, a decision and then a rear-naked choke. Basically, I don’t mind wherever it goes. I just take the finish wherever I see it. But I like to finish fights, I don’t like decisions, cause they can always mess you up.”

Like Dana White says never leave it to the judges!

“Never, but I haven’t got any bad decisions yet, but you  never know and you never want to know.”

Many have thought about it, but only a few have made the leap into competition. And while still very young in the sport. We were wondering what his very first experience of stepping inside the cage was like? 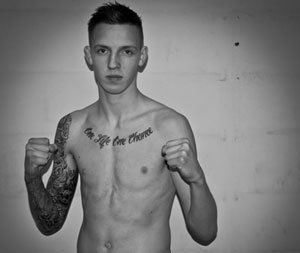 “My debut was in old C class rules, so there were shin pads and no ground and pound. I remember I just got in and I froze. Never experienced anything like it. Rodney was doing my corner and he shouted last-minute instructions and I remember not being able to understand what he was saying. It felt like a different language.

I just wasn’t myself and just got caught in a submission. But after that it still got me really hooked, because I loved the feeling, in front of everyone, people shaking your hand. I was determined to get a win and it made the first win that bit sweeter.”

“Basically he’s fought one of my teammates like three times and I’ve actually cornered against him before. As far as I know, he’s taken a bit of time away from the sport, but he’s coming back now. But he’s game, looking to fight, so that’s what I want.”

“I don’t try to focus too much on my opponent, but focus on what I’ll do. I’ll take the fight wherever I want it. That’s how I get the wins.”

Looking to keep busy, Rhys already has another fight lined up at Kumate in Belfast at the end of August. And with his birthday following on shortly thereafter in September, he may just relax for a bit before getting back inside the cage.

“I’m pretty active, very active so I am and I like to keep it that way.”

And like all athletes who are dedicated to their sport. Rhys will be looking to turn pro, but it’s a decision he will leave to his coach at Next Generation, Rodney Moore to decide.

“It’s definitely something more at the back of my mind, but I’m still thinking about it. Our gym, we train with the pro’s, so we train just as hard as the pros. There’d be no real big difference. But whenever Rodney and all my coaches think I’m ready, that’s what I’ll go with. I don’t want to rush it too, you only get one pro record.”

And a shout out!

“I’d like to thank all my sponsors really, Nemo’s, all the guys from the gym. Reds Piano bar and Grill, I actually work there as well. Peak Physique, all my teammates, all my family, all my friends for supporting me and getting behind me.”