Well, Ronda Rousey and Sara McMann have put me in an awkward spot. And I was all ready to break down the technical Judoka vs Freestyle wrestling bout that was to be the UFC 170 main event. So instead we will look at one of the most underutilized techniques in Mixed Martial Arts today: The Body Shot. Level changes in MMA usually mean kick the legs. Then the head or vice versa, it is a sport of leg kicks and headhunting.

So why don’t fighters target the body? After all, it wears you down, restricts your breathing and as we have seen recently can drop an opponent in short order. Mostly it is the level of commitment required in order to work the body, it is a slow burn as opposed to the immediate effect. In a world where any KO highlight video includes numerous high kicks (including those as sloppy as Gonzaga vs Cro Cop). And winging overhand rights Chuck Liddell style there seems to be no room for body working outside of a select few fighters.

Body Punch: How to Guide 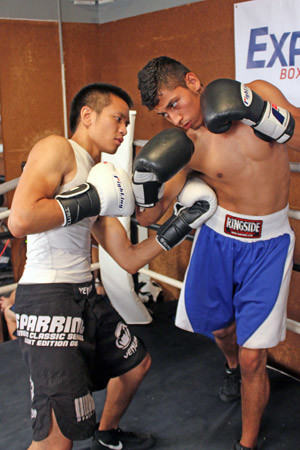 Too often I see fighters use a winging hook, chin up in the air-exposed. This is not correct, and if your opponent has his wits about him, will result in eating a big punch. The body punch is so effective because you are well covered when throwing it. Head off the centre line (another topic to discuss) and your passive hand is guarding against retaliatory hooks. You can achieve this position via slips, rolling under shots or set it up with a combination and footwork.

As for the punch itself, it is a cross between an uppercut and a hook, commonly called a shovel punch. It travels directly from your loaded position to the body, striking just under the rib cage. It shouldn’t scuff the opponent or make a slapping noise. When landed correctly there is a dull thwack, followed by your opponent/training partner/willing guinea pig’s groan. My trainer often describes it as: “imagine you have Wolverine claws, you are looking to leave perfect punctures, not gash and slash the midsection.”

TKO: The Liver Shot in MMA

The term liver shot and its use in Mixed  Martial Arts was popularized by the man himself: Bas Rutten. Because the liver is the largest gland organ in your body and when hit properly, will incapacitate a person both physically and mentally. A liver strike is usually made with the left side. Be it knee, kick or the left hook in infighting. Or the regular short body hook, in a short and quick manner.

The drive is usually made under and to the front of the ninth and tenth upward to the base of the shoulder blade toward the spine. The strike shocks the liver and causes the victim to lose focus and drive. If not to lose consciousness outright, and can cause a breathless feeling in the victim.

Speaking from experience everybody punch following a liver shot is ten times worse. As every time the same shock runs across the length of the organ. The best example of this is from Bas Rutten vs Jason Delucia (ignore the colourful title)

And for those of you complaining that the stoppage was early. Maybe it was, but I’ll bet you’ve never taken a liver shot.