With UFC Fight Night Dublin just around the corner. We wanted to catch up with the man from Bushmills Norman Parke before he steps inside the octagon this Saturday night. With the Next Generation team amassing some great wins in recent weeks, it’s now Parke’s turn under the spotlight. And with a raucous crowd expected on the night.

We wanted to know how have things been going in the lead-up and what we can expect to see come fight time.

How has the swimming being going up north, we follow you on social media?

I wouldn’t say I’m swimming a lot, but I’m in the water, that’s about the most of it. The currents up there are dangerous, you end up frikin drowning or something. I only go in and lie about and do a couple of strokes and that. Just for the recovery, it’s good for your mind. You feel like a new man once you’re finished.

Besides all that how has training and the camp been going?

Things have been going good. I’m only back training about 12 weeks because I took a little time off after my last fight. I’ve been doing a lot of running for the last few weeks, so my weight is good. I’m feeling nice and light and loose. Once I get to this sort of weight, I start to feel really loose and light on my toes. But it doesn’t matter how good you feel up to the fight, it only matters when you fight. That’s it really!

Because there were lots of times when I have felt great. Like the last time, I felt my best ever going into a fight. But then when you go into the fight, it’s like feck man, like I’ve done 10 rounds of sparring or something. In all honesty, I don’t really care how I feel.

Because I understand that you can have the worst training camp ever and you can get injuries and everything can just be going wrong. And then you can fight the best fight of your life! So now I know that. It matters whenever you step in there on the night and that’s it. That’s the approach I’ve taken now.

Before I joined the UFC I had lots of fights in one year because you’re not worrying. You are just saying, feck it, let’s go and fight. And that’s it, less stress, less worrying about it. Just turn up and fight.

What’s going through your mind as the minutes ticked down to the night? What are you like fight week?

It’s weird, sometimes I can be saying “Ah feck it, let’s just go and fight. ” But then times, like in the last couple of fights, my opponent was changed. Fights that would have been great, that I wanted. But it doesn’t matter, because you should be willing to fight anyone at short notice anytime. That’s what you should be able to do. True fighters do that you know.

But fight week, what I’m thinking about is what might happen in the fight. What kind of punches I would like to throw. Being put in bad situations, what you would do to counter that. You go through the fight sometimes in your head.

It’s crazy, your emotions are up and down. It changes that much sometimes during the day. Sometimes my Coach Rodney (Rodney Moore) would be chatting to me. He understands what’s going through my head. But sometimes you can’t be arsed to do anything. Especially fight week, I don’t want to do anything.

I often found it a bit strange the difference between boxing and MMA. Where opponents are usually separated in boxing. In MMA you’re in the same hotel all week. Do you often bump into your opponent during a fight week? 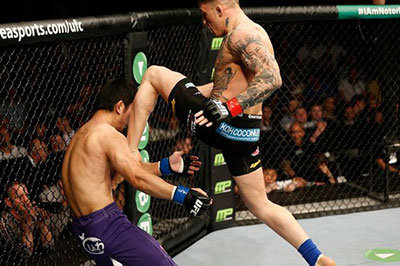 Aye, you often do. My last three or four opponents I often bumped into them. It’s just kinda, “how’s it going” kinda thing. If we get stuck in the same elevator or something like that.

Gleison Tibau, he came up and said: “good luck my friend” or something like that. And then Trinaldo, I saw him.

And he was just looking, not talking you know. Sizing me up or something like that. But then again everyone is doing that. They’re all like, “there he is there, let’s have a look at him up close and personal.“ But who gives a feck what he looks like. I’m going to fight him and that’s it.

After you last two fights, are you feeling the pressure going into this fight?

I don’t know. I don’t know what I’m feeling, to be honest. No, not at the minute, maybe a bit closer I probably will. At the minute it’s just a fight. I’m not really thinking about what happens next you know. I’m just going to fight and that’s it. I feel like it could be a good moment. Turn up put on a good performance. Then I win the fight.

So what are your thoughts on Reza Madadi and the fight itself?

He has fought two strikers and a pure straight Brazilian black belt. He’s never fought a tough wrestler or anything like that. Well, before the UFC he fought Rich Clemente in Sweden, I watched that fight. But that was a very close fight. I’ve seen bits and pieces where I can beat him.

We kind of know what to expect from that crowd on the night. Would you say your win against Kotani was one of the most exciting wins of your career?

Oh, of course, Dublin is the best ever. You know how they are with the rugby team and the football team, they get right behind them. I’m no different even though I’m from the north. They cheered for me as I fickin lived in Dublin, you know. So this time I know what to expect. I got to control my emotions and not lose my focus. Tunnel vision the whole way.

As hard as it’s going to be to try and control that, I’m going to stay controlled the whole time because it’s a big fight. I’m just going to go in there and get into my groove and get the job done. That’s it.