Niklas Backstrom has long been touted as an up and coming fighter to keep an eye on. A product of the All-Stars gym in Stockholm Sweden. Home to a number of other UFC fighters including number one Light Heavyweight contender Alexander Gustafsson.

Backstrom takes on Noad Lahat this weekend at UFC Berlin in his first fight back since October of last year. We discussed his return to competition and oh yes, how long he can hold his breath.

How has everything been going few how are you feeling right now?

Yes, it’s going really good, training really hard as usual. And yeah, just getting ready for this fight that I have.

From the outside, it feels like the MMA community is laser-focused on All-Stars gym, as we don’t get to hear too much about other gyms in Sweden. Do you feel that pressure of expectation from the Swedish fans to always win or do you put that pressure on yourself?

Yeah sure, we are the best fighters in Sweden. There is no doubt about it if you are a good fighter you train at All-Stars. Almost everybody does that so, so sure there’s pressure but you know, there’s more pressure from myself than from my fans.

How strong is the MMA scene in Sweden right now outside of All-Stars?

It’s pretty big actually, bigger than I thought it ever was. It’s just grown so fast that I haven’t really caught up to how much it has grown because I’ve only been training for like the last seven years. So yeah you get pretty shocked sometimes how big it is.

Obviously the last event in Sweden, it wasn’t a success for Alex. But it was a huge event, were you hoping to fight on that card?

Yeah I was but I got injured, so I had to do an operation on my hand and that is why I couldn’t fight there so, it kind of sucked but that’s just the way the cookie crumbles… or however you say.

I just want to take it back to last October, was there a lot of pressure on you guys to get the clean sweep?

Well sure it was pressure like always, so it was nothing new there. But the only thing, it was the first time people were really cheering for me, so that was a new experience.

What was it like taking your first professional loss. After the dust settled what was going through your mind?

Yes, it sucked, I think the biggest thing for me was a shame you know, basically. It’s a bit hard because basically I think I should have won that fight you know. I think I was better than the guy, but you know, stuff happens I guess.

So you just got to deal with it. Everybody faces adversity in their lives. So yeah, you just got to show what you are made of when it comes. And I’m looking forward to the opportunity to show what I am truly made of, but for sure it was one of the worst experiences in my life. I’ve never been so ashamed in my life.
I should have won that fight, I should’ve been a little bit more focused, I just fecked up basically. 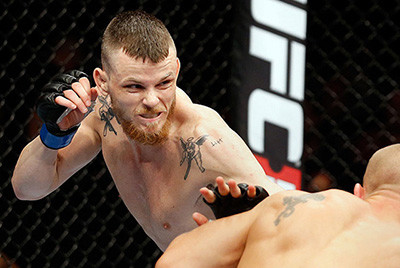 I train hard, I try to excel all the time and I think I’m one of the few fighters that haven’t been nursed into the sport if you know what I mean? I haven’t been matched to win and build my name up.

My fourth fight was against Sergej Grecicho, I don’t know if you know who that is, but he was ranked number two in Europe when I fought him on one week’s notice.

And basically my career has been like that, that was my fifth fight. I had 3 – 0 and he had like 20 fights! So yeah I have been kind of thrown to the wolves and I have shown that I have the right mentality.  I don’t know how to say it but I feel like I am pretty mentally strong and I deal with challenges well, I think.

Let me just ask you about your opponent Noad Lahat, he’s 5 9”, you are a lot taller,  you’re very tall of the division. How much does your reach play into your fights?

Can you tell me one thing about yourself most casual fans would not be aware of, any strange hobbies, weird habits or superstitions?

Man, I’ve got a lot of superstitions and I got a lot of strange hobbies! I’ll start with one. When I injured myself, I had to find a way to become exhausted without training. So I started trying to hold my breath, sounds pretty weird. But I became pretty good… 4 minutes and 5 seconds is my record.

And that was just for like training two months or whatever it was… so I feel like I was pretty talented in that.

And yeah I watch a lot of documentaries about space and stuff like that, like quantum physics. Basically things you can’t explain… it’s magic.