People often say things like “the UFC needs Conor McGregor” or “heavyweight boxing needs Tyson Fury.” These things are, of course, debatable, and in reference to a healthy economy and divisional depth. I believe though, for the soothing of MMA’s soul, we need Nick Diaz.

Nick Diaz last fought on January 31st, 2015. He faced Anderson Silva in what was originally a unanimous decision win for “the Spider.” Unfortunately, both Diaz and Silva tested positive for banned substances. Anderson for steroids and Nick for – brace yourselves – cannabis. Because of this, the fight was written off as a no contest.

As a result of these drug failures, we saw the Nevada State Athletic Commission make one of it’s most baffling decisions to date. Silva, who seemingly had half of Brazil’s PED supply in his system, got a one-year suspension. Diaz, on the other hand, got slapped with a whopping five-year suspension and a $165,000 fine! It seems like these commissions base their hiring procedures on antagonists from sports films.

Diaz would appeal the decision and have his sentence reduced to eighteen months and a fine of $100,000… But still, come on. He was cleared to fight again on August 1st, 2016, but – after previously hinting at retirement and disillusionment – has elected to remain on the sidelines ever since.

He couldn’t even corner his brother Nate Diaz, for the McGregor fights due to his settlement with Nevada, which surely won’t have expedited the healing process.

In the years since, rumblings about a return have persisted, as they always do. Dana White has stated though, that he didn’t believe another go around in the UFC was on the table for Nick, simply because he didn’t think the desire was there. Diaz hasn’t done much to convince people otherwise. This is in contrast to his Nate, who has had a very public back and forth with his employers.

Much of the media attention has now funnelled to the younger Diaz sibling, and it was perhaps easy to forget about Nick. Nate is certainly one to keep himself relevant and has managed to stay in the headlines thanks to the exploits of his greatest rival: Conor McGregor. Information on Nick’s status has remained scarce though until Diaz posted a picture of himself on Instagram in a fighting pose with the caption “Back where we left off.”

Where Does Nick Diaz Fit In?

The timing of such a post is the clincher here. Recently it was reported that Diaz had accepted a one-year suspension from USADA for neglecting to inform them of his whereabouts on multiple occasions. The Golden Snitch himself – Jeff Novitzky –  said on the Joe Rogan podcast that it was quite clear to everyone involved that this was less incriminating than it was Nick Diaz simply being Nick Diaz.

The suspension, however, is retroactive, meaning it expires the week of April 14th, 2018. So, Nick can fight again soon, and the Instagram post would indicate a desire. Nick remains an enigma of course, so it could be dangerous for Diaz fans to get their hopes up. Nevertheless, this is the most persuasive piece of evidence we’ve seen in a while. But, if a return does come to fruition, where does Nick Diaz fit in?

On the face of it, three years is not a long time, but the sport has changed tremendously since Stockton’s favourite son last stepped into an octagon. USADA came in like a wrecking ball and new ownership has seen some questionable booking decisions. This could be a good thing for Nick though.

Despite what you may remember about Diaz, he was never really a cowboy, or at least not towards the end of his career. He wanted money fights against big names. His last fight was a clear example of this very practice. Diaz vs Anderson Silva made no sense in terms of rankings (“rankings” lol) and wasn’t even in Diaz’s normal weight class of welterweight, instead of being at middleweight. It was simply a huge main event between two of the biggest names in the sport. 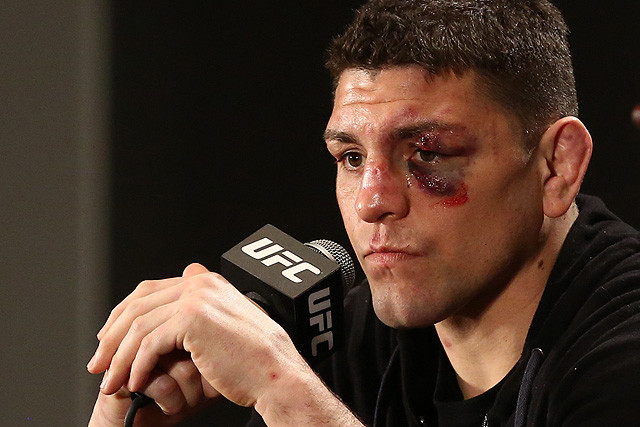 The thing about Nick though, and why everyone loves him, is his honesty. He’s real, for better or worse. The king of the 209 has never minced words at any point in his career. He says what’s on his mind and has a pantheon of glorious quotes that will live on forever in MMA. “Train by day, Joe Rogan podcast by night, all day.”

What does that even mean? Who cares? He’s Nick Diaz. It’s difficult to ignore the entertainment value he brings, despite what else may be said of the man. You never know what he’s going to say; there are no corporate platitudes in him.

You can accuse Nick Diaz of many things, but this kind of dishonesty is not one of them. It would be refreshing for a modern audience to see this level of transparency in a high profile fighter. It may even help to illuminate the current state of the fight game for a broader audience in respect to its past forms. Throwing the cat amongst the pigeons so to speak.

Nick is unlikely to have changed tact, so you can practically guarantee he won’t come back for anything less than a fortune and a superstar opponent. In regard to that opponent, well, who can say? There are plenty of intriguing options; Bisping, Lawler 2, Condit 2, GSP 2. The list goes on. All one can hope for though is that Nick doesn’t just do it for the money. If he does though, you can be sure he’ll tell us.