Nick Diaz and why we love rebels

The former Pride, EliteXC and Strikeforce standout now on his second (arguably third) run in the UFC will step up to middleweight, water not tested by Nick Diaz since a 180lb catchweight victory over Scott Smith back in 2009. He takes on the consensus greatest mixed martial artist of all time, Anderson Silva in one of the “big fights” he claimed he was only interested in the early stages of his hiatus in 2013.

Win or lose against Silva, who himself is returning for the first time since his horrific leg break in his title fight with Chris Weidman back at UFC 168, a good performance from Diaz could well get the fans favourite back in the Welterweight title picture, a division revelling in fresh competition in the absence of Georges St. Pierre.

So why is Nick Diaz so popular? Along with brother Nate, the two employ a hugely entertaining fighting style, and despite both being high-level Brazilian Jiu-Jitsu black belts, both prefer to ‘stand and bang’ so to speak and use their equally excellent boxing. Having been decisioned in his early UFC career by wrestlers such as Diego Sanchez.

Two-time All American Joe Riggs and former UFC champion Sean Sherk, Diaz’s frustration with ‘leg humpers’ the epithet for wrestlers that Diaz (and Rampage Jackson) would become so synonymous with later in his career was apparent.

Nonetheless, Diaz was a huge fan favourite even in his fledgeling career, with his victories over the likes of Josh Neer, Gleison Tibau and a young Robbie Lawler were particular highlights of his first run with the UFC.  This is illustrated best in his war with Takanori Gomi back at Pride 33.

Gomi, who at the time enjoyed a reputation as one of the leading Lightweights in the world was heavily favoured in what was a brief foray onto American soil for the Japanese giants. In what remains as one of the greatest fights of all time, Diaz ended a war at 1:46 of the 2nd round with a gogoplata, a technique largely unseen in MMA prior to Shinya Aoki’s submission of Joachim Hansen just two months previously. 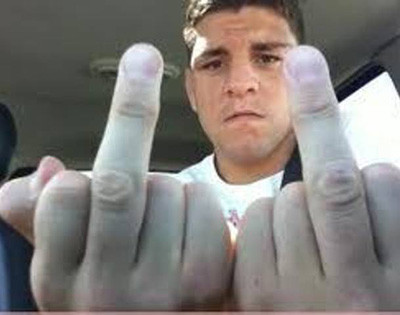 But that’s not the only reason for Diaz’s favour in the MMA world. Nick Diaz has gained his success in the sport on his own terms, a highly endearing characteristic in an industry such as professional fighting.

Diaz, who readily admits how much he dislikes fighting “Fighting is not something I enjoy doing. Fighting is something I feel I have to do, and that’s just the way it is,” and refuses to change the way he speaks or the way he acts for anyone.

Infamous quotes such as “Where you at Georges?” , during his rivalry with GSP and “Don’t be scared homie” which was said to KJ Noons in Hawaii. His interview with Ariel Helwani was also a famed moment.

Forgetting the usual corporate media face that many fighters adopt in order to tell Helwani that “people get slapped” for what Diaz perceived to be instigating fights. And that’s before we even mention the Nashville brawl involving Diaz and his teammates in an almost WWE-style fight after Mayhem Miller interrupted Diaz’s fellow Skrap Pack member Jake Shield’s post-fight interview.

However it’s not just Diaz that walks alone in MMA, there are many of the ‘Bad Guys’ in the sport’s history that have drawn levels of intrigue and interest among the MMA fans and media alike. The term ‘Bad Guy’ was made famous by Chael Sonnen, who although an iconic ‘trash talker’, actually proved during his tenure on The Ultimate Fighter both against Jon Jones and against Wanderlei Silva, that he was actually a very nice guy.

Although we’re not exactly short of case studies. Tito Ortiz springs to mind immediately, another notorious trash talker who also embarked upon unapologetic feuds with Ken Shamrock, Chuck Liddell and Dana White among others. Tito created the ‘bad boy’ persona and used it to make money across multiple platforms and multiple promotions.

Ortiz remains a leading 205lb contender in Bellator, and recently won a fight against Stephan Bonnar, enjoying his own WWE-style confrontation in the build-up to the fight. Another former UFC Champion that used a heel persona for monetary gain was Brock Lesnar.

A stud athlete that gained success in both amateur and professional wrestling before his entrance into the UFC, the fans distaste for Lesnar is one of the most prominent memories of his time inside the Octagon.

Showing disrespect to his opponents, his peers and even the main sponsor of the UFC whenever he was given a microphone. Whilst it is no surprise that in the pro wrestling world Paul Heyman is employed to do his talking for him.

Lesnar’s attitude and demeanour helped him smash PPV records and set new ones that are still to be beaten. With Lesnar’s victories over Frank Mir and Shane Carwin in first and second place in the UFC PPV records.

A bold claim when fighting in an organisation with the likes of Lesnar, Frank Mir (who wished death on an opponent) and Michael Bisping, himself very much vilified for his actions, such as spitting at the cornermen of UFC 127 opponent, Jorge Rivera.

Honourable mentions can go to the likes of Ben Askren, a man who walks entirely his own path in his feud with the UFC brass, infamously dirty fighter Gilbert Yvel and even Josh Barnett, who himself enjoyed a long spat with Dana White prior to his re-signing, mainly due to his string of failed drugs tests.

Love them or hate them, PPV numbers and column inches speak for themselves. We have an innate fascination with the bad guy, with the heel, with the rebel.

However, the main difference between many of the others mentioned and Nick Diaz himself is that with the Stockton, California native, it feels real. Never in Diaz’s multitude of rebellious moments in the public eye has it seemed like an act, as it always did with Sonnen and as it always did with Tito.

Nick Diaz is and always will be 100% Nick Diaz at all times, and for that reason, even against the greatest martial artist of all time, there will be plenty of people in his corner.