“There is no such thing as having enough cardio, there never is. You can always get better in cardio. It’s actually the only thing you can control out there.”

With the UFC recently announcing Smith as the latest entry into their prestigious Hall of Fame, during this year’s international fight week. We give the man known simply as ‘Mo’ the MMA Intrigue treatment.

A Seattle, Washington native, Smith got into martial arts the same way so many boys in the 70s and 80s did; through watching Bruce Lee. Taking up Taekwondo, alongside the obligatory Karate and Wing Chun. Smith eventually found his way to Kickboxing; the sport he would represent so well inside the Octagon.

A 7-0 record as an amateur kickboxer was followed by an entrance into the professional world. Smith lost his first bout and noticed his lack of stamina was what had cost him the contest. Smith would then train comprehensively to improve his cardio (something he would later be known for after entering the world of MMA). He would later return to beat the man he lost to on his professional debut. Tony Moretti on the route to titles in both the WKC and the WKA. 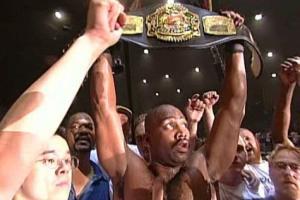 Whilst over the course of his career Smith would come out second best in most of his big-name fights in the world of kickboxing. (losing to the likes of Don ‘The Dragon’ Wilson, Peter Aerts, Rick Roufus and Ernesto Hoost). It was the world of MMA in which he would make his most impactful contributions.

Making his MMA debut in 1993, ‘Mo’ would garner wins over Minoru Suzuki and Conan Silveira. During his early career in Pancrase and RINGS, and would eventually enter the UFC in 1997.

Smith’s first UFC appearance came for the UFC Heavyweight championship. In an absolutely epic bout that’s well worth checking out for you UFC Fight Pass subscribers. Smith beat Mark ‘The Hammer’ Coleman in a 21-minute battle. Not only winning the Heavyweight strap but also 1997 Fight of the Year honours.

In a testament to his epic cardio, he’s one of the only fighters in MMA with a victory by ‘exhaustion.’ In his first and only title defence against fan favourite ‘Tank’ Abbott, at the subsequent UFC pay per view. A notable fact for this fight, it was the first time in UFC history a fighter had registered a successful title defence. God, I miss the 90s.

A long-time training partner of fellow legend Frank Shamrock. The two worked wonders for one another’s careers. Smith, a highly proficient striker, struggled considerably with the groundwork in his early MMA career. He was tapped by Suzuki in the rematch, twice by Bas Rutten, by Kiyoshi Tamura and by Shamrock himself.

Shamrock, on the other hand, was part of an early MMA super-camp in the Lion’s Den. A camp that focused almost exclusively on skills training. Together (and along with a young Javier Mendez of A.K.A fame) they broke off to form ‘The Alliance’ where Smith would improve Shamrock’s conditioning immeasurably. And Shamrock would arm Smith with the grappling defence he needed to really showcase his striking prowess in the MMA arena. 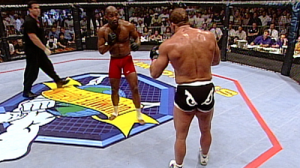 Maurice would lose his title to Randy Couture in his next bout and would spend the rest of his career back-and-forth between MMA and Kickboxing. Going 3-3 in MMA in 1999 with wins over Marco Ruas and inaugural K-1 World GP Winner Branko Cikatic against losses to Kevin Randleman and Renzo Gracie. As he jumped between the UFC, RINGS and Pride. His 2000 loss to Babalu Sobral in the UFC seemed to be the end of Smith’s MMA career. Until at the age of 45 he would resurface under the IFL banner.

A win over Marco Ruas, followed by an armbar victory over former Kickboxing foe Rick Roufus in Strikeforce. Came before another hiatus, until a final 1-1 run (culminating at the grand old age of 51!). Would, for now at least, see Smith retire for good with a horribly unflattering MMA record of 14-14.

Despite losses in a majority of his major fights across both MMA and Kickboxing. There must be no mistake made, Maurice Smith is a true pioneer of modern-day combat sports. With his cardio first philosophy, Smith blazed a trail in MMA before any of us knew who Nick Curson or Marv Marinovich was. In a young sport at the time that preached skills training and hard sparring above all else.

Smith showed us a way that vast numbers of elite fighters today, with all of the up-to-date research and evidence, still adopt. In a sport that was being dominated by grapplers. Maurice Smith paved the way for strikers to gain a real foothold in the sport of mixed martial arts. And for that reason, he’s a worthy addition to the UFC Hall of Fame.