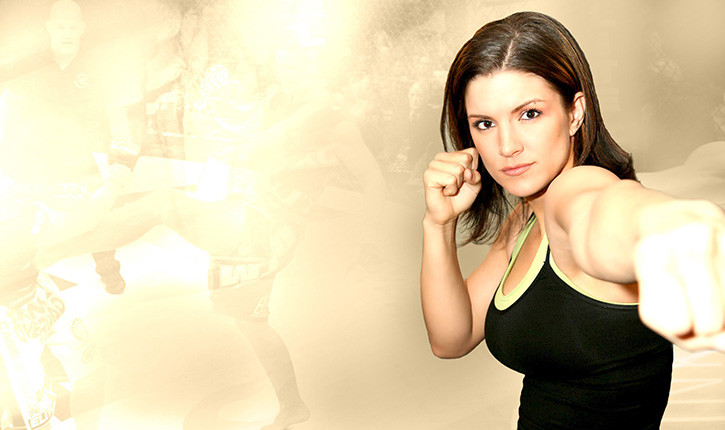 The oft-opined maxim of the knuckle-dragging misogynist, and when it comes to women fighters, it’s the only one that makes me seethe. Oh, I’m not easy to get a rise out of – and so such opinions (as entitled to them as they are) simply get blanked by me. Those who have other concerns I can forgive more easily, as they come from a good heart or perhaps having an upbringing in a conservative environment.

In December 2011, I knew what “cagefighting” was, and had a typically negative attitude towards it – typical for someone who was ignorant, and wished to remain so. My forays into combat sports coincided with the Olympics, when, to my credit, I cheered for man and woman alike in Boxing, and hooted along with the more knowledgeable when success came. It wasn’t part of my life. I watched a lot of football (soccer), and some tennis – and had an admiration for the ladies’ game for the latter (rallies, anyone?).

Something happened in late January 2012. I took a trip with my wife to the cinema, and wanted to see the latest Soderbergh movie. Thirty minutes into it and I was thinking “Who is this mad yoke running across Dublin’s rooftops, kicking seven shades out of anything that even looks like it has a penis?!”.

Not only that, she was doing this so convincingly that I never found myself having to suspend disbelief. Not for one moment. There were stunts on top of that, and so I assumed she was a stunt-performer-turned-actor. Being rather gentle on the eye didn’t hinder my interest any either! So I looked her up.

Leaving aside the fact that I had an outrageous crush on her for the following 10 months (my poor wife…), I had inadvertently found a new interest. I watched her fights and interviews and discovered that the sport’s participants were not only respectful, but enormously disciplined. Here were people who were living their dream and someone else’s nightmare.

They were born to do it. I was not born to do what I do (sit on my fat arse in an office cubicle), so I found them people to be admired. In fact, they were the first group of people younger than I whom I considered role models. Soccer I had watched, but I’d never thought of the vast majority of players as role models! 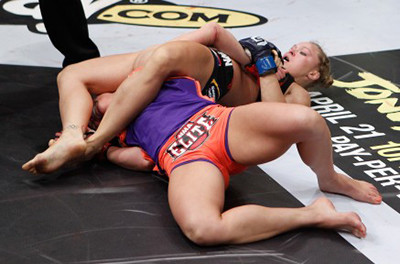 Moreover, the sport itself wasn’t nearly as brutal as the “cagefighting” I had in my head. I watched mostly women’s fights to get me up to speed with the ruleset and moves. I just found it easier to watch than the men’s. Yes, at times it can be a tad slower, but this benefitted a neophyte such as myself.

Unfortunately, I was ignorant of ESPN (who were showing UFC events) at the time, and so it was YouTube all the way. So from Gina’s fights (yes, it was Gina Carano – who else?) I’d heard of Rosi Sexton (more on her later), and from her interviews, Ronda Rousey.

Thankfully, due to MMA being a sport still relatively in its infancy, many of the fighters and promoters recognised and responded to Tweets. This little feeding of the ego further fuelled my interest in the sport. Apart from that, Twitter was excellent at finding Irish fighters, and so I started following Aisling Daly.

One day in May of the same year, a work colleague pointed out that there was a live MMA event due to be held in the Helix in June. I’d never been to a live event before, so I looked it up and I might have actually clapped with glee when I saw that Rosi Sexton and Aisling Daly were fighting. There was also a shed load of Irish talent

I turned up on the night, and scored myself a decent ticket. Rosi Sexton was in the Helix foyer, but I was too damn shy to come over and say hello. Given my relative inexperience, I probably would have made an arse of myself anyway. So I sat down to watch, and my God did I enjoy every damn minute of it, and was really impressed at how quickly they turned the fights over.

My other observation was the reversal of fortune with respect to toilet queues! Women still have it easy at MMA event – but I think it’s slowly changing. I estimated that maybe a quarter of the people there that night were females.

Unfortunately, it wasn’t a good night for Aisling – in fact, the start of a bad run for her – so happy she’s doing way better now! There were other Irish fighters who fared better on the night: Cathal Pendred, Neil Seery and Paul Redmond. God knows where they are now, though…

Towards the end of the card something extraordinary happened. In walked a cocky, bald-headed lad with a thick ‘Dubb-a-lin’ accent, and proceeded to dismantle his opponent. He certainly seemed popular with the crowd. When he won, he erupted from the cage, and flew into the crowd. I’d not seen anything like it before and started yelling and laughing at the same time.

He then came back into the cage, and proceeded to perform a rep of press-ups in front of his opponent, who was still dazedly trying to figure out just what the hell had happened. I threw back my head and laughed like a villain. The legend of Conor McGregor was born that night; at least for me. I was also hooked on MMA.

Where the hell am I going with this? Well it’s why I’m into women’s MMA, and why true aficionados (and aficionadas!) of sport should be too. If I were to pick the top three reasons, it would be these:

1. They’re Better Than You

Yup! Such a tender spot for the more chauvinistic among us. I happen to believe that a trained female MMA fighter can beat the snot out of most untrained guys. You’re entitled to object… but you’d be wrong. It’s one of those things where proof should never be established, thankfully.

The ladies bring it every time. Generally, while not as strong as men, they are more agile, and their technique has improved to the extent that it now generally rivals men’s, where admittedly it was lacking before.

I was an early adopter of Invicta’s cards, and stayed up all night tweeting best wishes, good lucks, play-by-plays, congrats and commiserations. Every night was sensational. In fact, the first night they had a lacklustre show was because the UFC pillaged Invicta of its two most popular weightclasses. They’re doing a great job of building them back up. Me and my wife will be going to Vegas in July to watch Conor McGregor challenge Jose Aldo, but you can bet your ass we’ll be there for the Catherine Costigan fight the night before, tricolour waving like a bedsheet in an Atlantic wind.

2. They Deserve It, Dammit

The fighter’s dedication to training is phenomenal, their urge for victory is second to no other sport and their commitment to their dream is impressive. Both men and women. The ladies train, shed weight, maul and punch just like the guys. They are elated by their wins, and crushed by their losses.

Should women give up on their dream merely due to genetic circumstance? What about Nick Newell?

UFC 184 was recently mained and co-mained by female fights. Ariel Helwani pondered whether it all would have been possible without Ms. Carano. Gina, notoriously publicity-shy, gave a lengthy and passionate response, much to the surprise of many. I won’t reproduce it here, but you can read the tweet here.

Hard to deny the good female competition is doing.

@arielhelwani What I think. ☺️ pic.twitter.com/ZEpkJoRYWl

Although this will be pretty much impossible to prove statistically, I believe that in the last few years women have brought more fans to the sport than then men (although a certain Mr. McGregor has done a lot for the guys too). Ronda Rousey, love her or hate her (it’s the former for me: I think she’s aces!), she has done more for the popularity of the sport than any other fighter has done.

She’s appeared on A-list talkshows, WWE events, movies… and every time someone who doesn’t know her, but likes her moxie, will check her out, and just maybe will get drawn to the sport. She has certainly out-shone many of her male crossover counterparts (Rampage, Couture, Rutten – Cung Le is arguably the most successful, especially in far-eastern markets). In fairness, you could argue she has had the benefit of social media, but you still have to know how and when to use it.

The recent TUF 20 season brought a stack of female fighters to regular fans’ attentions. Some to cheer, some to boo – just like the guys, although for some strange reason when the ladies talk trash they tend to get criticised more than the guys do. I hope that changes soon.

Paige VanZant might be another big crossover star for the UFC. She physically appealing, demure and can fight. She’s walking gold. Other than Conor, it’s hard to see where it is with the guys. Oh, some of the guys still have huge followings, sure, but not from outside the game.

Dana White surely knows by now what side his bread is buttered on.

I will always be incredibly grateful to the ladies for having shown me what an awesome sport MMA is. Both their and the guys’ passion for their dream has had a deeply positive impact on me. Even better, my wife now loves MMA too, and we’ve now started to build holidays around events. It’s always great to have something else in common with your partner in life!

Doubtless, some scholar is going to point out that my titular metaphor is a little off, as Boudicca was eventually beaten by the Romans. But damn she did them some damage first, and showed she could compete on the same stage!