Mike Swick hasn’t fought since December 2012. Once one of the UFC welterweight divisions brightest stars, the combination of a debilitating health condition and a string of injuries derailed his run at the welterweight crown. Having stepped away from the sport in 2010 in an attempt to right the ship. Swick would once again make a successful return to active competition in 2012.

But things still weren’t 100% and a subsequent loss to Matt Brown forced him to rethink his future. Since that time he has been busy building his dream gym at AKA Thailand and recovering his health. Now he’s back, to make another run at the UFC title and it all begins at UFC 189 July 11th at the MGM Grand in Las Vegas. We hit him with some questions and he kindly gave us his thoughts…

You have been away from fighting while building AKA in Thailand, but not away from the sport. Is this fight at UFC 189 more of a continuation rather than a comeback?

Its a comeback. I had a pretty bad health condition that affected me for many years and now its healed. This will be me coming back healthy and hungry again.

Who’s idea was it to do The Comeback video series?

We do videos on everything that happens at AKA Thailand so it was a natural decision when I decided to fight again. We are a very media-driven company.

What if anything has changed in the sport since you last competed? 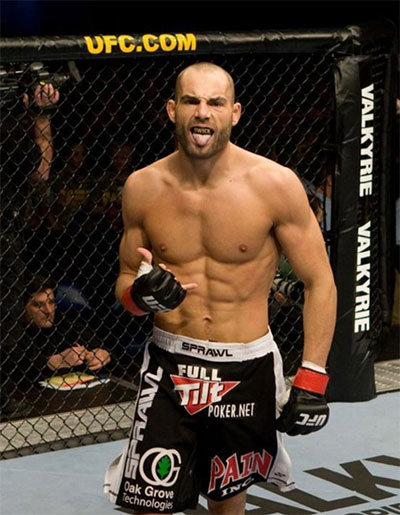 There have been a lot of changes. The most significant will be the Reebok Uniforms for this fight. Its cool to be on the first card to use them.

He is healthy, hungry and in the best shape of his life!

Did creating AKA Thailand consume all of your time/energy. Was it only once AKA was fully up and running that you started to think about fighting again or has it been in the back of your mind all along?

My health put and end to my career and I had to move on. I didn’t officially retire, but I assumed I was done. After building AKA Thailand things just started to work out and the path became clear. I never counted on getting healthy again and being able to fight but I am very happy about it.

Alot has happened in your division in the last few years. How does not having GSP at the top change the landscape of the division?

He was a solid target throughout my 170 career and I made it to a title contention fight. Unfortunately, I wasn’t able to get my shot at him. Now the division is open and a lot of sharks running around. For someone like me, I like what I see. There are a lot of great matchups and exciting fights to be made.

The Ultimate Fighter Season 1 feels like a lifetime ago. You are one of the few remaining guys who is still actively competing. Do you think that taking a break has extended your career in relation to wear and tear on the body etc?

Yes, I think taking so much time off has preserved my body and will enable me to fight hard for a bit longer.

Thailand is, of course, famous for its Muay Thai. What effect has being based there had on your standup game?

I started coming to Thailand in 2000 and training Muay Thai, so its always been a big part of my training. I am now getting back to my roots and have re-immersed myself into the world of Muay Thai.

Taking your record into account. With a win over Alex Garcia, where do you see yourself in a stacked welterweight division?

Not even thinking about that right now. I am only focused on fighting Alex on July 11th. Ask me again after that. 😉

After this fight do you ever return to the States or is Thailand now your long term home?

I am living in Thailand at the moment but I will spend some time back home with family after the fight. Its been a long camp away from them.

Make sure to check out “The Comeback – Road To UFC 189” on the AKA Thailand YouTube channel!