If you missed part 1, you can find it here. Let’s continue our look back at the career of Michael Bisping.

Less than a year after falling to Hendo, Dan Hardy would challenge Georges St-Pierre for the welterweight championship. This made him the first Englishman to fight for a UFC title. On some level, this must-have stung for “The Count”. That was an honour that surely felt predestined for him. Hardy would, unfortunately, come up short, and Bisping would continue his own pursuit in earnest.

After another tear at 185 – taking out Yoshihiro Akiyama and Mayhem Miller amongst others – Michael once again found himself in a middleweight title eliminator. This time against “The American Gangster” Chael Sonnen in January of 2012. After a close back and forth brawl, Chael P would secure the unanimous nod. This earned him a second crack at Anderson Silva’s gold. Once more, Bisping was so close, yet so far.

A Rough Couple of Years 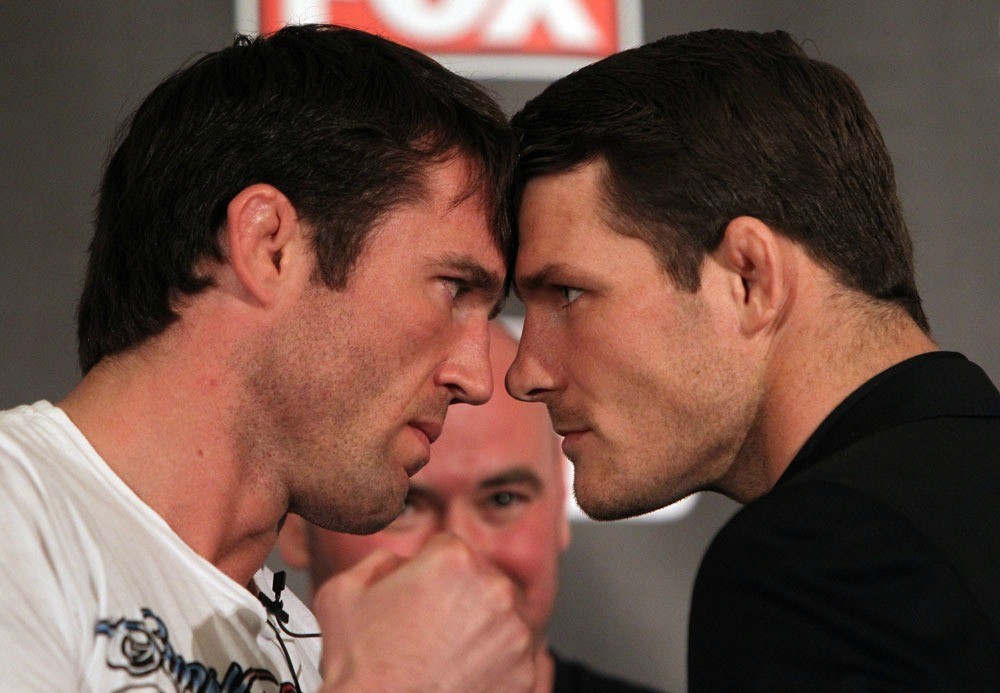 A rough couple of years followed for the Clitheroe native. Bisping would go 3-3 in his next six after the Sonnen fight, with two losses of note. One being a head kick KO at the hands (legs) of Vitor Belfort, causing an eye injury that would permanently disfigure the Brit. The damage wasn’t just superficial, with vision problems in his right eye ever since.

A particularly barbed development considering the ensuing ban on testosterone replacement therapy, of which Vitor was a known user. After the preclusion of such treatment, Belfort’s physique would visibly deflate, and his performances would quickly trend downwards; his strikes packing far less power.

Another loss was to former Strikeforce middleweight titleholder Luke Rockhold. An up and comer representing the next generation of 185ers. A fairly one-sided loss to Rockhold signalled a changing of the guard of sorts in the division. Especially considering that Chris Weidman now sat atop the throne. Maybe Bisping’s time had passed.

Luckily for Bisping, a burgeoning acting career would start to take off in 2014. At 35, this was potentially a nice out for a career that was beginning to look like that of an also-ran. However, fighting was still his passion – and how he supported his family – so he remained steadfast in his training, confident he could get back to winning ways. 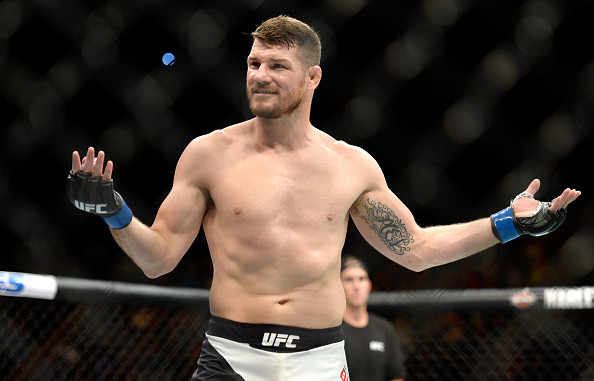 After the Rockhold loss, he would score two consecutive victories over Thales Leites and C.B. Dolloway. Bisping would then get the call to face a returning “Spider”, the long-time king of 185, Anderson Silva. An opportunity of a lifetime for Michael. And, to sweeten the pot, he got to battle the former champ on home soil.

Silva was coming off of a one-year suspension for a failed drug test, and Bisping had publicly made his feelings about PED users known – he himself had paid for the prevalence of this with an eye. Now in the USADA era, Michael had a chance to prove his worth on what was ideally becoming a more level playing field, and he did this on February 27th, 2016.

Bisping vs Silva is a true example of heart and grit, with “The Count” coming back from a devastating flying knee in round 3 that easily could have won the fight had it occurred five or six seconds earlier. The Englishman scored a unanimous decision victory over one of the greatest of all time. Truly a watershed moment for Bisping, showing the world he was one of the elites. Nevertheless, yet another run at the title picture seemed unlikely at 37, despite such a tremendous victory, or so we thought. 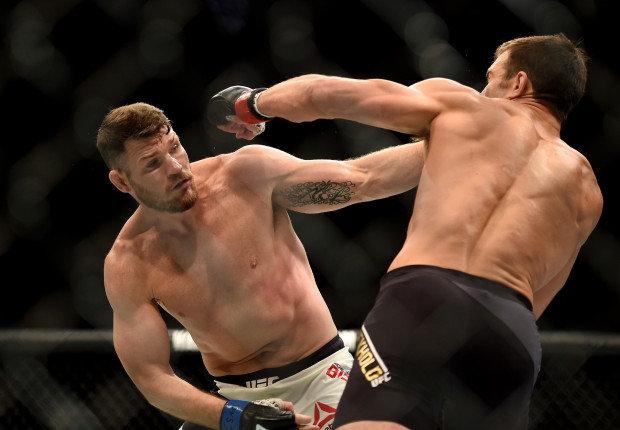 On May 17th, 2016, Chris Weidman was forced to pull out of his scheduled rematch with the man who took his belt, Luke Rockhold, at UFC 199 on June 4th. After such an impressive performance in February, the UFC called their most high profile Brit to the main stage.

After ten years and twenty-four fights in the UFC, the thirty-seven-year-old Michael Bisping was finally getting his first title shot. …On two weeks’ notice while he was filming: The Return of Xander Cage (2017).

Less than ideal circumstance were not about to dissuade the Englishman from his last chance at glory, so Bisping grabbed the opportunity with both hands and prepared for UFC 199 as best he could. Naturally, Bisping would step into the cage a +525 underdog.

Despite his grittiness, there was little faith he could depose the evolution of 185 that was the physical specimen Luke Rockhold. Then, three and a half minutes into the first round, Michael Bisping landed a let hook that sent Rockhold careening across the octagon. A final salvo of punches turned the lights off for Luke, and we had ourselves a new world champ.

After so long, Michael Bisping had achieved what so few thought possible. He was the king of the world and proved he belonged at the highest level. But, as Michael said in the Michael Bisping – My Destiny mini-doc, “I knew I could do it. That was a lifetime’s work. It wasn’t the two weeks’ notice, it wasn’t the training camp, that was a lifetime’s work and dedication that got that win.”

The Guiding Light For British MMA 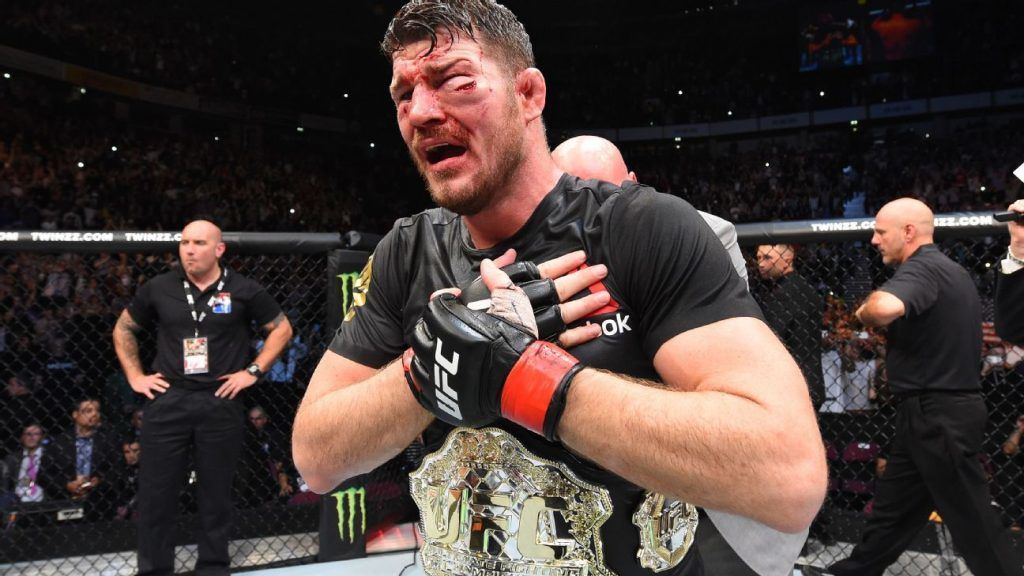 A victory tour of the UK followed for the champ, in which Michael got to express his gratitude for the continued support over the years, despite the numerous setbacks. In turn, the nation got to express their gratitude for Michael Bisping’s providing a guiding light for MMA in the country.

In October of 2016, he would run it back with Dan Henderson at UFC 204 in Manchester, defending his title. A year later, Bisping would enter the biggest money fight of his life at UFC 217 against a returning Georges St-Pierre, where he would sadly lose his title. Determined to get back in the win column, “The Count” would return that same month as a late replacement for Anderson Silva, who had once again failed a drug test. He would be knocked out in the first round by the young Kelvin Gastelum.

That brings us back to the present. After months of indecisiveness and teased final fights, Michael Bisping has retired from the sport of mixed martial arts. And really, why bother with another fight? He has nothing left to prove. He did it, when no one thought he would, and that is his true legacy.

Keeping the sport alive in the UK is all well and good. It is hard to imagine we’d been seeing the influx of talent we are if it wasn’t for him. But, what matters, and what will live on long after we get our next champ – our next ten champs – is what Michael Bisping represented on a human level.

It goes far beyond keeping the sport alive in the UK. Regardless of shallow nationalism and independent of fighting, Michael Bisping showed the world that with perseverance, you can reach the promised land. Everyone wrote him off, everyone doubted he had the tools to achieve his dreams; everyone but himself.

He believed in himself despite external pressure not to. It’s why we love and the underdog. He’s role model for anyone working towards their goals, no matter how unattainable it may seem, fighting or otherwise. That is why we need to thank Michael Bisping.

So thank you, Michael Bisping.