Metamoris: And the Evolution of a Promotion

When Ralek Gracie started and staged the first show in October of 2012. The growth we have seen up to this point seemed unlikely. Brazilian Jiu-Jitsu has for a long time been a very specialist attraction. Never really drawing great crowds or great interest outside of the wider Jiu-Jitsu community. Metamoris has gone some way to change that over the past few years by incorporating techniques. Used by combat sports promotions for centuries, that being the use of proven money-drawing talent.

The first Metamoris event on October 14th 2012 featured numerous stars from the world of Jiu-Jitsu. Including Featherweight star Caio Terra, 5-time world champion Xande Ribeiro and Kron Gracie, the emerging star of the legendary Gracie family. The event was headlined by two of the most decorated Openweight stars of their generation. As Roger Gracie and Marcus ‘Bucheca’ Almeida competed to a draw. The line-up stayed away from the stars of Mixed Martial Arts that later became a staple of the promotion. With only Dean Lister, who has fought only sporadically since his spell in the UFC on the bill.

Metamoris II was along a similar path, with Brendan Schaub’s match against highly decorated no-gi star Roberto Abreu and Kron Gracie. By this time gearing up for what would be an iconic win at ADCC later in the yea. Main eventing against Japanese MMA star Shinya Aoki. Metamoris drew massive amounts of attention from the Jiu-Jitsu community but failed to really receive any crossover press.

That changed drastically in March of last year when Ralek Gracie announced that headlining Metamoris III. Would be a rematch from one of the most prominent upsets in grappling history. In 2003, at ADCC in Sao Paolo, a then brown belt from Los Angeles tapped one of the most decorated black belts in the sport’s history. Eddie Bravo, then a student of 2001 ADCC Gold Medal winner Jean Jacques Machado. Submitted three-time Gold Medal winner and four-time World Champion, Royler Gracie.

A match that caused immense hysteria, and started bad blood (from select members of the Gracie family) for the next 11 years. During that period, Eddie Bravo had progressed into one of the leading Jiu-Jitsu instructors in the US. With his California-based 10th Planet Jiu-Jitsu becoming part of the global grappling culture.

Despite Bravo’s achievements, the iconic Royler Gracie still entered M3 as a heavy favourite. But proceeded to be absolutely dominated for 20 minutes in one of the most comprehensive displays seen in Metamoris thus far. Though the match finished in a 20-minute time limit draw, Bravo’s countless sweeps and multiple submission attempts (as well as his post-event confrontation with Royler’s bother Royce). Drew new levels of interest for the promotion.

Cashing in on this new level of interest, Ralek set up a star-studded line up for Metamoris IV. With a multitude of stars from the world of MMA and Jiu-Jitsu combining to create one of the most fascinating cards imaginable. Young star Garry Tonon, seconds away from victory over Kron Gracie at ADCC in 2013 submitted fast-rising Australian Kit Dale.

Saulo Ribeiro and Rodrigo Medeiros both donned the gi for their time limit draw, whilst Jeff Glover and his infamous donkey guard entertained the crowd in his bout with Baret Yoshida. However, it was at the top of the card where the PPV numbers were really counted.

Proven money draw Chael Sonnen set up his familiar promo machine for his bout with high-level black belt André Galvão. Whilst Dean Lister. Not submitted in a competitive bout in his entire career competed with the inaugural Heavyweight Title on the line against Catch Wrestling proponent, Josh Barnett. The stars from the world of MMA drew Metamoris’ highest ever viewing figures, and set a strategy they would continue with moving on.

Metamoris V featured a rematch from Pride 10 back in August 2000. When the legendary ‘Gracie Hunter’ Kazushi Sakuraba broke Renzo Gracie’s arm with a dramatic Kimura. The two competed to a 20-minute draw, the same result as fellow MMA stars Rory MacDonald. Jake Shields and Vinny Magalhaes all achieved in their respective matches. 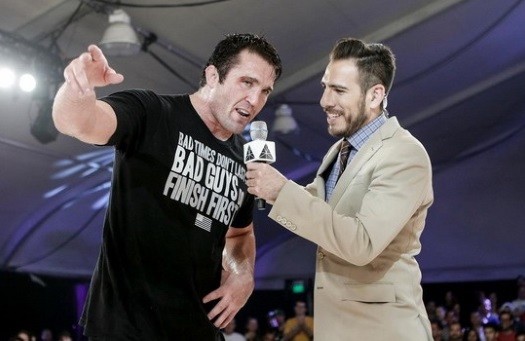 During the course of their history, Metamoris has evolved from a simple grappling showcase, from offering Jiu-Jitsu fans the chance to see the matches and the rematches they always wanted to see. It has evolved from that into a real combat sports promotion.

Metamoris VI features a return to the grappling stage for Chael Sonnen. Who despite his disappointing performance on the mat last time returns against Renato ‘Babalu’ Sobral, against whom he is 1-1 within MMA.

Sonnen will be bringing his usual hype train back to Los Angeles to hopefully line the pockets of all involved. Joe Lauzon, the UFC’s record ever bonus winner confirmed the world’s largest MMA organisation haven’t cut him. But he will be competing against Marcelo Garcia brown belt.

Dillon Danis at the event. Clark Gracie, grandson of the legendary Carlos, Xande Ribeiro and Jeff Monson all take their place in a card littered with big names. Headlining the show is Josh Barnett’s first defence of his Heavyweight Title. As he takes on the aforementioned Roberto ‘Cyborg’ Abreu in another intriguing BJJ vs Catch-as-catch-can contest.

Whilst many martial arts traditionalists will protest at the perceived changes, in reality, Metamoris is evolving in the same way any promotion evolves. The UFC evolved from a discipline vs discipline contest to a corporate juggernaut with the sole purpose of selling pay per view. Gimmicks that have set Metamoris apart such as offering no press passes (if journalists want in, they need to buy a ticket). And their staunch opposition to allowing the Jiu-Jitsu point fighting (so common in other grappling competitions that guarantee a winner) still remain.

But Ralek Gracie’s promotion is coming to terms with the real driving force of any promotion, money. Their use of proven PPV draws such as Kazushi Sakuraba, Josh Barnett and Chael Sonnen to bring in an entirely new set of eyes has worked wonders, and as we sit just over a month out from Metamoris VI, the promotion goes from strength to strength as all eyes shift once more to Jiu-Jitsu.