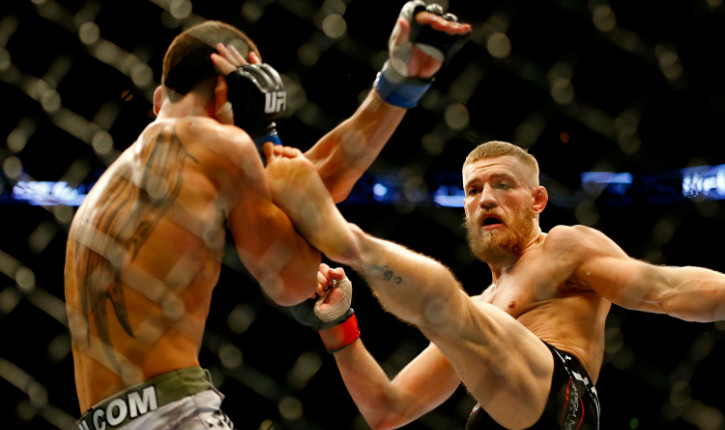 Conor McGregor is a master of self promotion. The charismatic Irishman has managed to keep himself in the public eye even though he has been sidelined for over eight months with a torn ACL.

His trash-talking prowess has catapulted “The Notorious” into the spotlight and despite fighting just twice for the UFC, he has become a fan favourite and one of the most recognisable characters on the roster. However, his jocular antics outside the Octagon often come at the expense of his fellow fighters, none more so than Cub Swanson.

On this occasion it was Swanson who instigated the row. “Beautiful Destruction” posted a tweet yesterday that called into question the Dublin-native’s ability to compete with at the highest level of the sport. McGregor’s response was humorous but far from amicable.

My face when @TheNotoriousMMA fights a top 10 guy and gets KOed @ufc pic.twitter.com/M263W355Fu

@CubSwanson @ufc My face when the entire top 10 have been killed. pic.twitter.com/acuBlgdUB8

Cathal Pendred, who is a training partner and compatriot of McGregor weighed in his opinion on how the pair should settle their dispute. The former Cage Warriors champion, who will be a contestant on the upcoming TUF season 19, proposed that the two warriors should slug it out as early as this summer

@CubSwanson @TheNotoriousMMA @ufc What are you doing July 19th?

While a grudge match between the dynamic duo would be a tantalizing prospect, reports suggest that “The Notorious” will face Cole Miller in his comeback at UFC Dublin on July 19th. Swanson is also expected to fight Jeremy Stephens at UFC Fight Night 43 one week after the Dublin event. If and when the two fight, the likelihood is an all-out war will ensue in the cage. Until this happens, fans have the fighters’ venomous back and forth exchanges to look forward to on twitter, to stoke the flames of the bitter rivalry.

@JamieKavanagh90 @dillo1888 @CubSwanson He can train with who he wants. I’ll whoop all three of them. Cubby bear. Hans Moleman you look like