The Skrap Pack is Back in Action Beginning this Weekend

After an extended layoff, the Skrap Pack are finally back doing what they do best. For those who didn’t know, the Skrap pack consists of a tight-knit group of fighters who have all studied under the tutelage of Cesar Gracie. At its core, you will find some of the most talented MMA fighters on the planet including, Gilbert Melendez, Jake Shields as well as Nick and Nate Diaz. In more recent times this group of fighters has been through some pretty turbulent waters.

Some even wondered if we may have seen the last of the Skrap pack as a whole. But through the years and their shared struggle, moving up through the ranks of the sport and developing into high-level athletes. The members of the Skrap pack have developed an undeniable tenacity and aren’t going anywhere! At least for now…

Leading the charge in just a few days time on the 6th of December. We see Gilbert ‘El Nino’ Melendez facing off against Anthony Pettis for the World lightweight title. Up until this fight, Melendez hadn’t competed since  October 19th 2013. That time in an all-out war, or a technical brawl as he likes it referred to against Diego Sanchez. After over a year away from the sport, how will El Nino feel back inside the cage. The former Strikeforce Champ is undeniably the number one contender in the division and it will be interesting to see how he deals with the always entertaining Showtime. 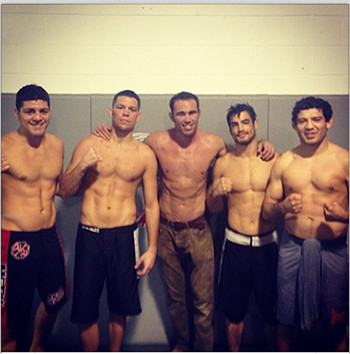 Nate Diaz who is now just about ranked inside the top 15 is another member who has been out of action for over a year, the last fighting on November 30th 2013. When he beat Gray Maynard in very convincing fashion. Since that fight, he has been going through his own issues with the UFC.

Would Nate Diaz Ever Fight Again?

While still contracted, rumours abounded about when or even if Nate would ever again fight for UFC. But in his first fight back, he is getting what he asked for in a big name and a top guy in title contender Rafael Dos Anjos. All eyes on Nate December 13th to see if he can move that needle and live up to his own hype train.

Nick Diaz has been out of action for so long that he is no longer even ranked. Having last entered the cage on March 16th 2013. What the future held for the older of the two Diaz’s brothers career really were anyone guesses. Calling for only big fights, Nick got what he was asking for and now faces the p4p king Anderson Silva on January 31st 2015.

In a middleweight matchup that is sure to get the New Year off to flying start. Some have criticized him taking the fight at 185lbs, namely Georges Saint Pierre. But Nick Diaz, being Nick Diaz simply replied “Why didn’t you take the fight”, fair point. Regardless the fight will take place and promises to be one of the most intriguing on the 2015 calendar.

Skrap pack in name only as while the Diaz brothers still fight under the Cesar Gracie. Gilbert Melendez has moved on and since opened his own facility aptly named the El Nino training centre. But going by previous experience of the Skrap pack code, no doubt they will be cageside on the night in support of each and every one of their brethren.