Most of you will have heard of Lion Fight but the more people I speak to about it, the more I realise how few of us real combat sports fanatics have actually paid much attention to high-level Muay Thai. I, like most of you, was well aware of this promotion.

I’ve heard Joe Rogan discuss it on his podcast, I saw the initial Tiffany Time Bomb hype; but despite all that, I shamefully have to admit that I’d never really paid enough attention to the fights. For this, Lion Fight, I am truly sorry. And here commences my love letter to you.

Lion Fight was founded in 2010 by a chap called Scott Kent. He was a security bigwig for some Vegas casinos prior to entering the murky world of fight promotion and has trained kickboxing and Muay Thai for much of his life. I know all of this from reading this feature called Scott Kent: The Lion behind Lion Fight on the Lion Fight website because I can’t find crap else about him. 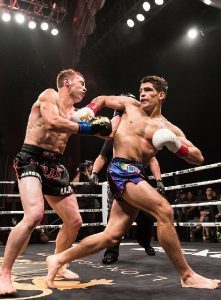 I’m being melodramatic of course, you can find information if you look hard enough, but the point is we’re dealing with a much smaller promotion than we’re used to in say, MMA or kickboxing. They are not the UFC, they’re not Bellator or Glory, they’re not even WSOF.

They don’t have the finances of any of their rivals or contemporaries, the marketing budget or the pre-existing public profile. They don’t even have a Wikipedia page. Whilst this makes life a little harder when it comes to educating yourself and researching for articles.

It does mean you get a bunch of free fights on YouTube to peruse at your leisure. Every cloud and all that.

Ryan Seacrest for some reason and a few other parties. Axs TV has been wonderful for combat sport, not only did they have InsideMMA for so many years; they have also covered numerous small-to-medium promotions with production values far beyond what they could otherwise have afforded.

It’s thanks to Axs TV that a promotion like Lion Fight has some of the best announcing in the business. The irrepressible Michael ‘The Voice’ Schiavello, my personal all-time favourite play-by-play commentator sits beside the straight-talking and ridiculously knowledgeable MMA legend Pat Miletich. That, for the casual fan, is huge.

Joe Rogan’s value to the UFC in explaining the ground game is priceless. Though not as alien to the untrained eye as grappling, Miletich’s explanations of high-level striking are a thing to behold, and a highlight of any broadcast. 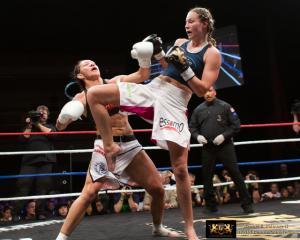 The story of my own personal interest in this promotion can be told through three different fighters. I was first awakened to Lion Fight, and honestly to Muay Thai as a discipline in March 2014, when the most dominant fighter in mixed martial arts, Cristiane ‘Cyborg’ Justino went over to face what the first of these fighters, Jorina ‘JoJo’ Baars, in what we heard would be an actual challenge.

She main event Lion Fight 14 against the undefeated then 25-year-old Baars. Almost everyone reading this will know how that went, but suffice it to say it certainly was an actual challenge.

Cyborg took the Muay Thai expert 5 hard rounds, losing a decision in an absolutely epic contest that, amazingly, you can watch for free on YouTube. Amazingly, despite being the most dangerous striker with breasts since Roy Nelson, Baars has only managed to put together a 1-3 run in her MMA career.

She has though remained imperious and a lot more active in the art of 8 limbs, fighting twice in 2015, twice in 2016 and making her 2017 bow recently for Bellator Kickboxing to move to 41-0-3 in her career. 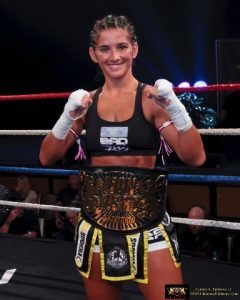 But I digress, moving on from one bad woman to another, the 2nd fighter that caught my interest was Tiffany ‘Time Bomb’ Van Soest. Timebomb first appeared on the horizon many years ago, when she defeated London’s very own combat sport stalwart, Alexis Rufus, with a brutal 4th round KO.

She returned shortly afterwards, this time clutching her newly won Lion Fight Women’s Featherweight belt to beat another brit, ‘The Princess of Pain’ Lucy Payne, whom she would stop in the first round.

Despite another victory over Payne the following year, and a win over another brit, Bernise Alldis, it wasn’t until controversy struck that I took notice of ‘Time Bomb’ again. Tiffany said Lion Fight hadn’t paid her, Lion Fight disputed this. Regular readers will know I’m partial to some combat sports gossip from time-to-time, but this isn’t the article in which to engage TMZ mode. So let’s get back to the fights.

A 12-1 run in Lion Fight culminated in Van Soest selling her title belt (old habits) Van Soest moving on to Glory and then Invicta, but not before some sensational performances inside the ring, including against Poland’s Martyna Krol, which I have graciously linked for your bloody enjoyment. 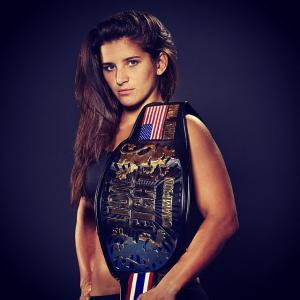 The third and final member of my own personal Muay Thai holy trinity is Gaston “The Dreamkiller” Bolanos. A relative unknown prior to his appearance with teammate and fellow Lion Fight standout Kevin Ross on the Joe Rogan Experience.

Bolanos has since been signed by Bellator and already has a win under his belt in both MMA and kickboxing under the banner. It was in Lion Fight though that he honed his craft.

Bolanos has been involved in a number of absolute barnburners during his brief career; including the aptly titled ‘Spinning Back Elbow of Death’ from his bout with fellow MMA convert Caleb Archer back at Lion Fight 20, his bloodbath win over Tyler Toner in only his second career fight, and his absolute war with veteran Thai welterweight Kronphet Phetrachapat at Lion Fight 27.

Bolanos, despite his tender age of just 24 years old has one of the most consistently exciting back-catalogues of any fighter in any discipline in any promotion I’ve ever seen. And as prone to hyperbole as I can be, do not make this claim lightly. This guy is as legit as they come and the sky is the limit. 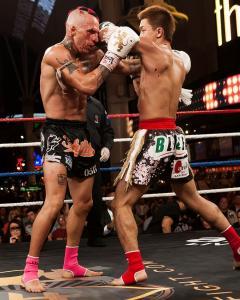 Lion Fight is one of the most impressive promotions you’ll come across. Pound-for-pound the most exciting fights out there, blood, entertainment and glorious violence combined with some of the most high-level technique on offer in the striking world.

They return with their latest offering later this month, and it will be headlined by a lightweight title showdown between the champion, Dutch-Surinamese (a heady concoction) Sergio Wielzen and Phuket Top Team’s very own Lerdsila Chumpairtour.

As is often the case with Thai fighters, Chumpairtour has had an astonishing amount of fights, and was at one point riding a 100 fight win streak! A run that saw him capture Bangkok’s fabled Rajadamnern Stadium on three separate occasions. The event takes place on April 28th at the Foxwoods Casino in Connecticut. Give it a go, if you’re a meathead like me, you’ll love it.