The retired mma legend who recently lost in his middleweight title challenge and final fight to Michael Bisping, Dan Henderson. Has weighed in on the potential matchup between UFC lighweight champion Conor McGregor. And the number one contender Khabib Nurmagomedov.

Recently speaking on the Adam Corolla show. Hendo was asked for his take on the mouth water prospect of McGregor defending his belt against the unbeaten Russia and had this to say;

“I think that kid that fought last weekend, I have trouble with his name, Magomedov, the Russian kid, that’s at 155 – I think he would definitely give Conor a huge problem,”

Khabib Nurmagomedov fought on the UFC 205 FS1 prelims. And despite a shaky start against fellow top ten fighter Michael Johnson. The Russian went on to dominate things in the later rounds, submitting Johnson in the third. Bringing the tally to a hugely impressive 24 – 0 in his professional career. 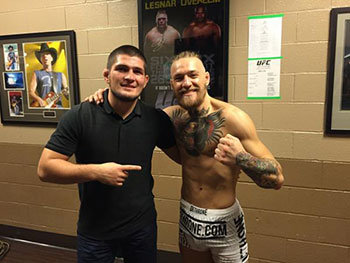 With a potential bout looming between the two. The usual chatter begins about who would emerge the victor. Commenting that McGregor had become more “well rounded”. Henderson still believes that in his last two fights, against Nate Diaz and Eddie Alvarez. There was a distinct lack of grappling exchanges.

“He’s always shown that he’s got good hands, good kicks, but to see him against a couple of different wrestlers that had good hands, it took me a while to get on board with him. I think Eddie Alvarez just did not fight a smart fight whatsoever. He didn’t use his wrestling whatsoever.”

With a self-imposed hiatus now in the pipeline. It’s unsure as to when we will once again see the Irishman inside the cage. With the most likely date being sometime in mid-2017. There’s no doubting people’s keen interest in seeing who the SBG man will face. When he once again steps back inside the octagon either at 155 or 145lbs.. via the cage door we I might add.