So, after literally minutes of deliberation, with zero focus groups of customer surveys, by popular demand, I am calling this blog ‘Keego on…..(insert weekly topic here)’. It will be myself talking about whatever topics that hit my cerebellum in the 17 minutes before the deadline.

So this week, I didn’t really pay attention to too much MMA wise. And that is because we had a family meeting and decided it was best to watch Sons of anarchy nonstop instead of having a life. The reason being, and as we all know, nothing brings a family closer together than watching a motorcycle gang commit offences on other gangs while driving some sweet Harleys.

It hit me while leaving the gym on Sunday when I overheard 2 lads talking about knocking someone out. I thought I would tell you about the last 2 times I was knocked out. Now I know it isn’t the macho thing to mention when I was knocked out, I should be telling you about the people I put to sleep but that’s not me. Show offs always get their comeuppance.

The first time while in the competition was against a lad far better than I was. I had been training hard, but this lad was bigger, faster and stronger than me. I was able to fight well and I would like to think we were fairly level going into the third.

Then he put the foot down. The first punch (or the last punch) I remember was a right hand that he picked up from the floor. 40 seconds left and I wondered why he was putting his hand so low. Then it clocked me on the right side of my jaw. I heard a low bass drum noise and a hum, followed by some serious pain about a second later.

The only thing I can compare it to was a time I broke my ankle in a wrestling match (you know, that fake stuff) and then was driving from Glasgow to Birmingham to fly back to Dublin. It’s a long story not for this blog but sufficed to say I was very painful.

Now, this punch I was hit with didn’t know me out, but I wish it did because I still have nightmares about it. I could feel my face contort and any thoughts of defending myself went out the window. I had never felt pain like it.

But that wasn’t the one I am telling you about. In the milliseconds following the right hand from the floor a left hook came in that sent me to cuckoo land. When I saw the tape it looked like I was smiling when I was on the way down.

No doubt I was happy to not be thinking about my jaw anymore. What I remember was thinking I was in my bed the morning of the fight, listening to the radio and hitting the snooze button. When in reality I was snoring in front of 400 strangers in a cage.

“I managed to come to and there were no lingering linger lingering effects.” 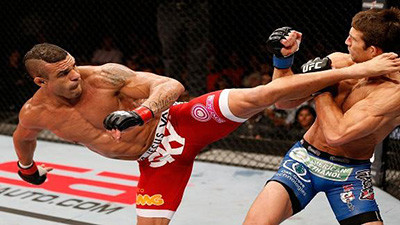 I cracked this fella with a nice left high kick (he was 5 foot 11 and a half I’ll have you know) I felt his right orbital bone on my shin. I thought I had done some serious damage. He was very savvy and held on and the ref got us separated.

Unfortunately for me I was more spent than 10 minutes into my wedding night and threw a desperation left hook, right straight left body shot. Or the dangadadangadadang as it is known on YouTube. All connected, all looked good, but zero power behind them. Then I saw his left leg move, he was going for the low kick so I went to block it, but he switched it high and it was all she wrote. Instead of me feeling his orbital bone on my shin I felt his shin all over my face.

Down like a ton of spuds. I was shaking on the ground. It looked very bad. It turned out to not be an issue, but in my mind is where the worrying thing took place.

In my memory, I got up twice and was put down again each time. The mind was willing, but the body was not. These are the main reasons why I only train and don’t fight. I know I just don’t have the killer instinct in me. My record was 1-1-1. Which is a pass in the leaving cert so I’ll take it.

So that was my memories of being kicked by a stranger in front of strangers, hit me up with your stories of intense pain for peoples entertainment @nkeegan