Who is UFC fighter, Michelle Waterson?

The karate hottie as she is dubbed caught the attention of the MMA world with both her modelling good looks and her fighting skills to go along with them. It was these attributes that helped Michelle Waterson receive opportunities both in and out of the cage.

She was able to garner a lot of exposure and form a substantial following of sorts. She was also able to achieve this in a time when women’s MMA was relatively still under the radar and didn’t have the mainstream pull it does today.

In 2007 Waterson, got her first real breakthrough. She was offered to appear on the reality TV show, Fight Girls. In a format similar to The Ultimate Fighter series, Fight Girls featured women competing in a Muay Thai competition with its finale being held in Thailand.

Although she never ended up winning the show, Waterson did go on to star in MTV’s Bully Beatdown. She has also starred in music videos and featured in calendars as well. Whilst very successful outside of the cage, The Karate Hottie is no joke inside of it either.

Waterson’s style largely consists of very technical striking, accompanied by great speed and cardio. A product of Winkeljohn and Jackson she boasts a black belt in American freestyle Karate. She also competed internationally in Kenpo and Wushu and includes Muay Thai and boxing in her skill set. She also fights from a southpaw stance. 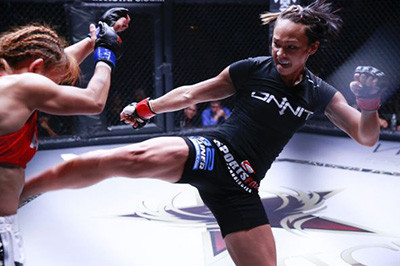 With a record of 12 – 4, she has spent most of her career fighting at Atomweight (105lbs). She has competed for Ring of Fire, KOTC, and Strikeforce. Most recently the Karate Hottie has been fighting for Invicta Fighting Championship, where she held the Atomweight championship of the world.

The lady she beat for that very championship, was none other than current UFC title challenger Jessica Penne. Penne is due to challenge current 115lb UFC Strawweight titleholder Joanna Jedrzejczyk. That fight takes place on June 20th at UFC Fight Night 69, in Berlin, Germany.

Coming into the UFC The Karate Hottie is regarded as one of the top pound for pound female fighters MMA has to offer. She also brings an established career and an established following to match. In a division that is still new, and already has a win over the current title challenger Penne.

If Waterson can be successful in her debut against Angela Magana, on July 12th at the TUF 21 finale, then the Karate Hottie may be fighting for her second world title sooner rather than later.