Justin Wren is back and fighting again

Friday, August 28th, Justin Wren ( 10-2) will be coming out of retirement to face Josh Burns (8-8) in a Heavyweight bout at Bellator 141. Wren was a cast member of TUF 10: Heavyweights that featured the likes of Brendan Schaub, Matt Mitrione, Roy Nelson and of course… Kimbo Slice…

Wren made it onto the show by submitting Wes Sims. He then went on to lose a close decision to Roy “Big Country” Nelson who would go on to win the season with a first-round TKO over Brendan Schaub in the finale.

Wren’s misfortune would continue as he lost a very close split decision to Jon Madsen in the Ultimate Fighter finale. However, he would bounce back and string together three straight wins in other promotions, two of which came by finishes (2nd round rear-naked choke and a first-round TKO).

But in the end, Justin had a higher calling. He stepped away from the cage to pursue a life of humanitarian work. Since leaving the sport, he started the organization “Fight For The Forgotten” which has helped develop sustainable water wells for members of the Mbuti Pygmy tribe in the Congo jungle.

Since beginning this journey in 2013, Justin and his team have helped create over 27 sustainable water wells and helped improve agricultural practices for the local communities. 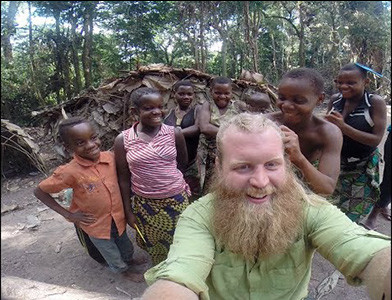 You might be thinking this guy sounds like a damn hippy and a typical westerner trying to get into other people’s business. Well, that’s just not the case with Justin Wren.

He is a well-spoken and polite individual who has a legitimate passion for helping others. He has dedicated the better part of the last five years to helping a group of people from the other side of the planet.

In addition, he has overcome depression and addiction. (Oh man, what have I done in the last five years?! I recycled a bit, watched some pretty sweet fights from my couch and made a four-year undergraduate program take five years…

It makes me feel like a pretty awful person just writing about him, to be honest.) Anyways, this is just to say that he has done some pretty incredible things for these people and we could all learn from his experiences.

And to top it all off, his main motivation for stepping back into the ring is to promote his charity foundation Fight For The Forgotten. So he is quite literally going to fight for the people he cares for. But, Wren has a legitimate chance at a comeback in the sport.

At only 28 years old, standing 6’3″ tall and weighing over 250 pounds, this two-time Greco Roman all American wrestler and the heavy-handed fighter will no doubt give anyone he faces a challenge.

However, ring rust is a major possibility as the sport has evolved tremendously in the past 5 years with the competition really improving. Nonetheless, he has the experience and the skill to be a contender in a vastly improved fight game.

If you would like to donate to Justin’s organization or to simply learn more about the cause, please visit fightfortheforgotten.org