We spoke with Irish amateur and owner at D10 MMA Jonathan “Chopper” Reid  about his beginnings in the sport. Why he decided to go all out and set up his own training facility in Dublin. McGregor, Diaz and what the future holds for the very busy entrepreneur.

So can you tell me a little bit about yourself, how you got started in the sport?

I came from a council neighbourhood, with not much to do as a teenager, I dabbled a bit in kickboxing from age 14-16, I really enjoyed it, but broke my leg which I had to lay off the sport for a few years until a friend of mine took me to SBG Ireland and trained there for a while, loved the sport instantly.

D10 MMA is your baby, what made you decide to set up your own gym?

After moving house, I had to leave SBG after such a short period due to living too far from the gym, I decided to gather up guys that had an interest in MMA to train and grow together in a local sports complex. From day one I knew this was for me, and from the get-go decided this was for me, to set up a club.

Can you give us some more info on D10, how it operates, the pro’s that work with the amateurs and any future plans?

So D10 now has 3 professional coaches :

Justin Doyle, whom specialises in k1, he has competed in k1 on some of the biggest stages in Europe.

Myself : Chopper Reid, helps out MMA,

Bringing It Back to Boxing

Kieron Cummins, is our boxing coach.

Kieron is a two-time national champion and whole load experience in the striking department.

And we have recently added our jiu jitsu coach – Marcus Phelan , whom trains from east coast jiu jitsu.

We are scheduled for 4 D10 MMA fighters on the Ryoshin card on March 5th. We have one of our female fighters, 2 guys & myself on WCFC special edition show on 15th April, where I will fight for the lightweight title, which will be coming home to D10 MMA.

Does running a club while actively competing ever throw up any conflicts? You often hear owners say they are too busy training others to compete. Has this ever been an issue for you? 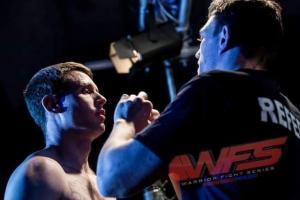 Yes, I was inactive for majority of 2015 as I was putting too much time into the club as it was its first year running, but now 2016 we have pro coaches to help out, giving me more time to get more training in and focus on my own fight preparation, as well as my team.

I saw that you got behind the whole free Nick Diaz movement. As a fighter what is your personal opinion on authorities getting involved like that in non-performance-enhancing drug-related issues in the sport?

To me, it’s silly. I’m against drugs in this sport, whether it be recreational or performance-enhancing drugs. They all need to go. As a professional, you need to keep it professional. I love Nick & Nate as performers, which is why I was behind him.

The Irish Invasion of the UFC seems to have faded slightly into a one-man show. What’s your take on A, Conor McGregor and B, the current state of MMA in Ireland itself.

Well now with safe MMA & IAPA involved in the sport, it only just recently took the sport to a new level. 2016 is going to be a big year in Irish MMA. Conor is a gentleman and opened so many doors for Irish MMA and paved the way for the Irish MMA fight scene.

Being a gym owner as well as an active fighter you see both sides of the coin. What if any are the positive effects of people coming in to train in MMA that you have seen.

It’s a life-changing experience, for most of the guys who came through my door, mixed martial arts has given them so much more in life, and something to drive them. The sport is so humbling and also teaches respect, and how to approach life in a whole different aspect.

What are your own personal aspirations in the sport, your long term goals?

I would love to see my self & my whole team make it, to go all the way.

I am up for 5th march on Ryoshin fight night & then I am up for lightweight title on WCFC exclusive edition fight night on 15th April, and hopefully, be defending that belt in august.