Daniel Cormier recently stated that in order for him to really solidify himself and for his career to feel complete, he “needs” to compete against Jon Jones again, and win.

Personally, I feel that not only does Daniel Cormier need Jones, but the UFC also need him. Jon ‘Bones’ Jones is the pound for pound best fighter on the planet earth. The title of ‘The World’s Most Dangerous Man’ is one that usually goes to the undisputed UFC heavyweight champion, but when Jones is around and dismantling world-class opponents in the manner in which he does, there truly is no man more dangerous.

At the age of only 28, the New York native has already beaten and defended his title against all the serious contenders in the 205lbs division, with the exception of Anthony Johnson who he was scheduled to face in May at UFC 187. Of course, that fight never materialised because of his infamous hit and run incident which led to him to be stripped of his title and suspended indefinitely by the organisation.

Despite a very interesting and exciting matchup between Daniel Cormier and Alexander Gustafsson fast approaching, the division seems to have gone into a slight lull as a result of Jones’ absence. Gustafsson in fairness has an opportunity to stamp his authority on the division as he is the only man ever to really run Jones close inside the octagon.

Losing a decision that many felt could have easily gone his way. So should the big Swede dethrone Cormier on October 3rd, he has the knowledge that he has already given Jones as good as he got for five straight rounds to back up his legitimacy to the title.

While Jonny Bones Is Away

Jones’ detachment from the UFC has not only blown the light heavyweight division-wide open but also the pound for pound rankings. For many years it was Anderson Silva sitting at the top of that ranking system before being replaced by Jones.

And during both men’s tenure as pound for pound king, nobody in their right mind could have put up a serious argument against either. The same can’t be said for current pound for pound number one ranked fighter, Jose Aldo.

There is no doubt Aldo is an unbelievably talented martial artist, certainly the greatest featherweight the world has seen to date. But the fact that the featherweight champion will enter his unification bout with Conor McGregor as underdog emphasizes just how up for debate the pound for pound argument is right now.

Demetrious Johnson looks unbeatable at flyweight, TJ Dillashaw has twice destroyed a fighter once tipped as the pound for pound recognition in Renan Barao, and of course Ronda Rousey, a phenom in the sport. All of these athletes have a legitimate claim to the pound for pound throne.

The question is should Jones return, would these fighters retain their legitimate claims? I don’t think so. Yes, you can make a strong argument for Ronda Rousey because the woman is just a living superhero if you ask me. But she is probably too far ahead of her opponents in terms of ability to truly be tested.

Which ironically I feel hinders her claim to pound for pound number one. It’s all too easy for Ronda and it’s now a case were a move up in weight to fight a bigger woman is all she has left to prove if indeed she has anything to prove. 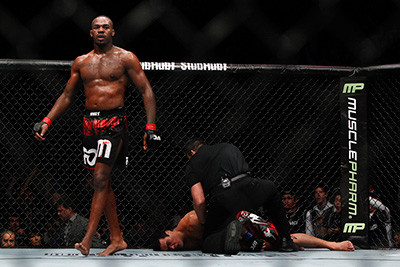 The Best Fighter in The World

Some people might argue that it’s good for the sport to have such an open debate about who is the greatest fighter in the world is, and they might have a point.

But it’s more important for the UFC that they have all the best fighters in the world competing under their banner. Jon Jones made a mistake and I’m sure he will pay the consequences for that. Unfortunately so are the fans and the UFC.

I’m sure it’s only a matter of time until ‘Bones’ returns to the Octagon, and when he does I fully expect to see the best Jon Jones we have ever seen.

I feel that his experiences with Cormier and Gustafsson will be a huge advantage to the former champ should we see either of them rematches. Jones is an intelligent man and will have learned from any difficulties he might have endured during both matchups, and I feel that he is only a couple of fights away from completely ruling the light heavyweight division again.

The more interesting fights for Jones would come at heavyweight. At heavyweight, he doesn’t have that size advantage that served him so well at light-heavy, but instead, he would have tremendous speed and agility on his side. The current Heavyweight champion Fabricio Werdum pulled off arguably the performance of his career to upset the odds and defeat Cain Velasquez back in June.

Now, hypothetically speaking, if Jones was scheduled to fight Werdum this weekend, who would be favourite? I know who my money would be on, and that’s not to take anything away from Werdum.

Jon Jones is The Elite of The Elite

The fact of the matter is that Jon Jones ranks among the elite of the elite. We can all look back at the Fedor Emelianenko era or the Anderson Silva era and be grateful to have been around to witness such incredibly gifted and entertaining martial artists. I truly believe we are in the Jon Jones era,

And with every day, week and month that passes that Jones isn’t active, I feel we are missing out in potentially historic and magical moments. All we can do for now is just wish Jon all the best in whatever demons he is currently battling, and hope to see him back again soon where he belongs, The Octagon.