Irish Amateur Ron Butler on Work, Titles and His Passion for MMA

We spoke with Ryoshin Fight Team amateur Ron Butler about how he balances his working life with his love for MMA. Forging a living, while at the same time making every moment count inside the gym. He discussed his training, his upcoming fight for a lightweight title. As well as his team’s recent move to brand new premises. And of course what is the fulltime chefs knockout dish?

How are things at Ryoshin, you moved to new premises. Can you tell me more?

Yeah, the new place is fantastic, it’s really nice, really really nice. I have to say I was surprised when I first walked into it. And we keep doing it up as well adding more things all the time. There a putting in a cage wall there around the whole gym. We’ve really stepped up our game, it really makes you want to go to the gym more, it really is a brilliant gym.

How is your own training going, you work Thursday to Sunday. Do you get to do any training during that period?

I go jogging myself in the nighttime or if I get a chance in the morning, it depends what time I’m in. Yeah, but I do work 12 or 13 hour days. So it’s kinda hard to get the workouts in. But when I’m off I’m training twice a day. That’s all I do, I don’t do much else, to be honest with you.

Are you working on any particular areas of your game or are you happy with your overall game?

Yeah, had a bad outing there three weeks ago, I was fighting for the lightweight tournament at UXC. Who was in the tournament, Decky MCAleenan and Campos. And another lad I forget his name, but it was supposed to be Sam Slater, but he pulled out.

But yeah I got Decky in the first round and I just got caught with a big shot. Yeah, he is one of the best amateurs in the country. I think I heard he’s gone pro now. But yeah it was a bad night. But I have been on a good run. Before that, I had three wins in a row. I fought five times in the last year so I’m keeping active you know.

So what’s going through your head when you take a shot like that and get rocked?

It would stun you in there, but you just have to have your wits about you. It is difficult like I took that big shot off of Decky there. And struggling to try to get your head back together. That’s what it looks like in the cage. It is hard taking shots, but its part of the game. You win some you lose some.

You fight at 70kg, but you are a big guy. Any chance you might ever move up? 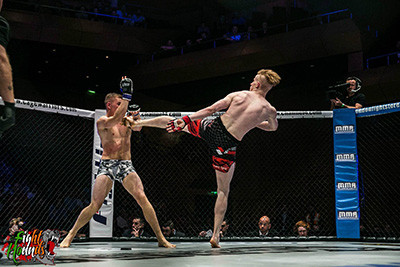 Oh yeah, I’d say there’s a chance I could move up. But at the moment I make 70 quite handily. I mean I walk around at 76 so it’s not too bad. All I have to do is change my diet for a few weeks and its fine.

But yeah I could see myself, I have the height, I’m nearly 6 foot. Welterweight would not be a problem if I moved up. But there are some absolute beasts up there so that’s the problem. Guys cutting crazy weight, it’s a problem in this sport as well.

When are you fighting next yourself?

I’m fighting for the Ryoshin lightweight belt in November, November 7th I think it is. I think they’re changing the venue, but I don’t know where it’s on. I’m fighting Dylan Logan another good amateur, he’s from SBG.

Can do have a dream scenario for when you want to turn pro, what will it look like, when it might happen?

What it will look like, I don’t know. But yeah I’d love that, that is a dream. What fighter isn’t you know, but yeah I’d love to go pro I just have to get the experience first then go for it, why not. It would be up to my coaches anyway they know me best.

It is a tough decision, but looking at the lads last night on BAMMA. There were some good amateurs who just went pro. That is a level of amateur now in Ireland. There’s not much in between amateur and pro. It really has stepped up its game amateurs are brilliant in Ireland now at the moment. Even more so than the UK.

Seeing as you are chef I wanted to ask you what is your killer… your knockout dish?

I’m making a lot of paellas, some may be a nice paella. A bit of Spanish cuisine there yeah.