Our interview with Irish amateur MMA fighter Graham Gerathy. He discusses all things MMA, training with Team Caveman in Gorey Wexford. Dealing with a series of injuries. And what the sport has taught him about himself!

Can you tell me a little about Team Caveman? Trainers and teammates?

Team Caveman is a club from Gorey. We have about 30 or so members at the moment, and 3 coaches. Sean is the head coach, all-around badass and is still competing for Ireland with Judo Ireland. Junior is our B.J.J coach, with a brown belt from Portugal Gold Team. Last but not least is my self, Graham.

Our team loves its B.J.J, with most of them competing in tournaments. We also have 2 active MMA fighter me and Jamie Finn. Most of the guys are big nerds, our club seems to be a safe haven or something at times. I think it’s the B.J.J that attracts so many different and brilliant people. I can honestly say that our team has the friendliest members.

Where does the name originate and are there many in the gym which live up to the name?

The name is actually from our head coach Sean Davitt, back from his fighting days. Not only does he fight like one but he looks like one. Even evolution couldn’t kill Sean. I’d like to think that over the years a bit of that cave-like mentality rubbed off on me. Actually, I think training with him its hard not to just learn and adapt so I’d say most of us have that mentality.

Do you have many fighters in your gym who compete? 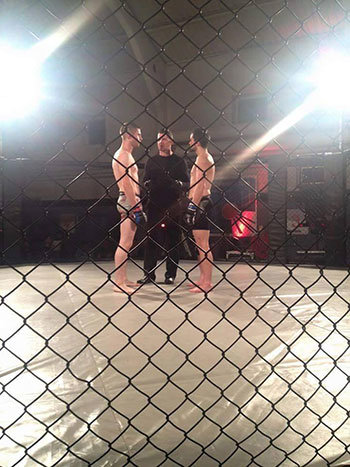 We are a club still growing, most of our team are just about ready to start looking at fighting. With that being said Jamie Finn and I competed late last year. Jamie went 1-1 last year and had picked up an injury during his last fight.

I was looking to compete early this year after my first win in the cage, but have been sidelined with injury after injury. With 3 or 4 guys looking at the cage this year and our team is involved in both Judo and B.J.J we will be very active in the near future.

Injuries, have you had many. If so how you dealt with them?

I’m only 26 have been doing martial arts since I was 16, in those 10 years I’ve been beaten and broken as have many who do what we do. My 2 major injuries came from football, not martial arts, I had 2 ACL operations both on my right leg.

From then on I’ve been picking up various others due to the initial damage. Even when you’re out injured you have to go down to your club. Show your face, you can even learn from the sidelines. If you can hit the gym or hire a personal trainer. It will help your injury no end and very handy to have that extra bit of power in competition.

How long have you been training and what got you started?

I started training in a traditional form of Jiu-jitsu. It’s so long now I can’t remember what made me want to start but I’m glad I did. from there I found UFC and went ok cool I wanna do that so I started MMA and B.J.J.

What’s the toughest thing you have discovered since taking up the sport? Mentally, physically taxing?

I love the training, the work, the weight cut, I think D.C said it best “Embrace The Grind”. I will go all night in training even during a weight cut, what was really hard was turning into a coach. The change of mind from being I’m here to learn and throw down at the end to going back to the start. You have a room full of people all listening to you so you better be on the game, they paid money to learn from you. It’s hard because when I go down there to train I gotta flick back.

If you weren’t kicking people in the club, what would you be doing to stay fit?

The only reason I know what a gym looks like is down to MMA hahaha. I’d be fat and on my sofa with some sweets. Nothing else seems to tickle my fancy, so I guess giving up and pigging out is my only option.

What has training taught you about yourself? 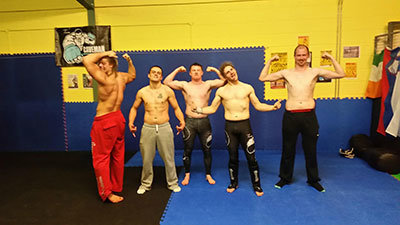 I’ve learned the true meaning of community. If you want to see what it means to be human, go to your local class. No matter what it is, Kickboxing, Judo anything and you will see men and women having fun, learning, trying to better themselves while also helping those around them. If that generosity was a common thing in life, the world would be
different.

What are your plans for the remainder of 2016?

I would love to have 2 more fights this year but my focus is on getting the rest of the team up and going. With more of them fighting and getting experience it’ll help me and themselves get better.

What is your ultimate goal in the sport?

I’m too old to make any major moves in the sport but I’ve got my eye on coaching. I figure that if I keep going and keep learning I might train the next Conor McGregor.