UFC 189 Blog: In the Words of a Great Man, Batman’s Arch Nemesis and Current UFC Commentator, Here… We… Go… !!

Welcome to the first of 1 blogs from the house opposite the island by a sometime kickboxer, regular pro wrestler (filthy filthy word but it’s still real to me damnit!) and constant sponsor of Guinness. I am Keego and the boss man and I met whilst accidently showing up to the same party where we had to put keys in a bowl. I assumed it was for parking purposes but he told me it was something completely different….

That’s the second last time I make that mistake.

The first stream of mma consciousness is about the biggest fight of the year, the fight that has been literally weeks in the making, the fight that pits Brazil against Ireland. And that is of course, ‘The Notorious’ Conor McGregor fighting Jose Aldo (and or Chad Mendes).

I remember being in the Helix years ago to watch ‘the next big thing’. Even then McGregor walked, talked and moved differently to everyone else on the card. Looked relaxed, calm and dangerous. It was amazing to see someone operate on a different level up close. It wasn’t really a fight, Dave Hill was intimidated by the crowd. I actually work with a fella who tried to charge into the cage after the submission.

Fast forward 1 year and The Notorious picked up his dole money, hopped a flight to Sweden and smashed up Marcus Brimmage with an uppercut picked up off the ground. The hype train was starting. It was great to see someone from the 188 club believe in themselves all the way up to the UFC. But was he going to be able to live up to the hype? 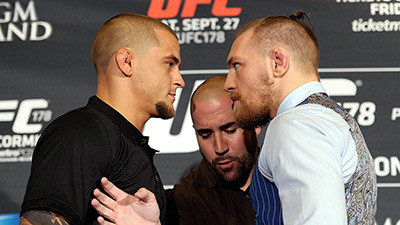 Looking at the opponents so far, there has been only one contender for legitimate threat and that was Dustin Poirier, a ranked fighter with credentials. Funnily enough, this was the fight I was least worried about. I thought that the foot might come of the gas fighting the lower level guys, but neither of these things have happened.

Jose Aldo is a killer. A beast of a 145 pounder. He is very far from a joke. We had him rattled in Dublin, and if the fight was to happen the next day I think Conor would have hurt him badly. But time has passed. There is nothing harder to defeat than someone backed into a corner. And that is exactly where Aldo is right now. For the first time in a long time, everyone isn’t picking him as the favourite. He is having to defend himself for the first time. Will it get to him?

Now we get to rib-gate. Is it fractured? Is it bruised? Does he have any ribs? The last week has really been a rollercoaster of emotions hasn’t it?

If you look at it from a business standpoint, the UFC must be rubbing their hands together. If (and it is a big if) Aldo is pulled from the fight for the injury, then Mendes steps in for the interim title fight with the winner getting Aldo. Imagine, Aldo V McGregor in Croker or Lansdowne (it’ll never be the Aviva to me) . Dana will take the spectacle of the stadium over the Vegas money in this case. With one body kick in training the UFC’s bank account could be in for a deposit bigger than it has ever had before.

With the countdown being on your humble bandwagon mma correspondent may be back to go into a bit more madness about what is happening in a sport where people punch each other in the face for our entertainment.