Frankie Edgar Is The Last Of This Breed

Frankie Edgar has long been nicknamed “The Answer.” I’ve always been curious of what exactly the question is; maybe now we know.

During Ben Askren’s appearance on the JRE MMA Show, he spoke of the two kinds of fighters; the hyper prepared, scientific fighters, and the cowboys. The namesake of the latter is, of course, the one and only Donald “Cowboy” Cerrone, and he’s a good place to start.

Donald Cerrone will fight anyone, anywhere and anytime. In the build-up to his recent battle with Yancy Medeiros, he even said he often knows the date of his fight before he knows who his dance partner is. Needless to say, his team frequently find themselves at odds with his decision making.

That’s how Cerrone found his way into the hearts of the fighting faithful. It’s what we want out of a fighter; chin down, swinging at whoever is in front of them, but, as Askren pointed out this can only get you so far. Before Cerrone found his way back into the win column recently, he was on a three-fight losing streak, and he has frequently come up short in the big fights. Again, we love Cerrone. He’s always down for a crowd-pleasing scrap, but ultimately,he finds himself supplement to the true greats of the sport.

This brings me to Frankie Edgar. Poor Frankie. “The Answer” has been on the end of some rotten luck these last few months, having two main event title fights booked, with both being cancelled. The first came at UFC 218 in a featherweight championship bout with Max Holloway, when Edgar had to pull out 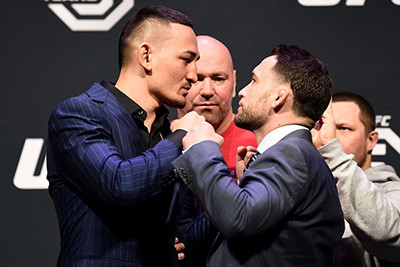 Then a couple of months later, the rebooking was scrapped when Holloway sustained an injury. The one division that isn’t clogged up and the UFC can’t keep a damn title fight together.

Most fighters today would happily sit and wait for a shot that is undeniably owed to them. Plus, Frankie Edgar is a legend who has earned the unwavering respect of the MMA masses, so no one would begrudge him this approach. No one apparently, but Edgar himself.

Chael Sonnen has spoken at length on his YouTube channel (if you aren’t watching, you’re missing out) about the shift in the sport from the days of the wild prizefighters to the now pickier athletes. To summarise, he isn’t a fan.

Whether you agree with his assessment or not, you must acknowledge this change. But that’s sure to be expected with an increase in cameras and capital though. With more eyes and more money comes more to lose and more to gain, and the risk/reward of fighting is a bigger part of the game now more than ever before.

Chael himself is a great example. Of course, I would never speak ill of The American Gangster, but he’s a guy who took a lot of fights that maybe if you were looking at it with a purely tactical eye, he probably shouldn’t have taken. As a result, he lost a lot of fights. Was it worth it? This comes down to opinion. Sonnen is a much-loved figure in hardcore MMA circles and has made a ton of money, so maybe it was worth it. That isn’t really my point.

At the end of the day, it comes down to a combination of character and motivation. Some fighters want to fight everyone, some don’t. Some want to treat this as a sport, and strategically position themselves where they need to be in order to climb to the top. It must be frustrating for the older guys still around who fought everyone and potentially missed out on those big wins because of it.

Perhaps the new generation is simply learning from the previous one’s perceived mistakes. If you can call them mistakes, because some wouldn’t, but when a championship is your goal they certainly look that way.

From a fan’s point of view though, it definitely feels like a breath of air when a cowboy shows up. These days it seems like 99% of MMA headlines have something to do with people ducking or being ducked. Tune into the MMA Hour any given week and it seems like almost every guest is complaining about that very thing in one way or another. And hell, you don’t need me to remind you about the love triangle at lightweight. 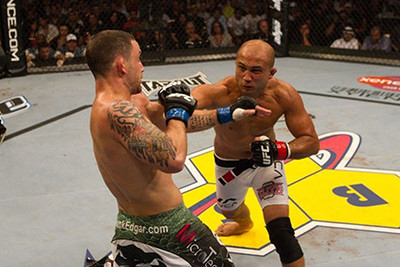 Frankie Edgar is old school. Now 37, “The Answer” had his first fight in the UFC in February 2007 and would go on beat B.J. Penn for the lightweight title then defend it three times. Along the way, he had some absolute tear ups, including his legendary trilogy with Gray Maynard.

The man could retire with a glowing legacy and a sure-fire spot in the Hall of Fame. However, he now has the opportunity to join that illustrious club of multi-division champions.

Not his first opportunity mind you, but an opportunity nonetheless. Instead, he decided to face a lethal up and comer in Brian Ortega at UFC 222 in lieu of a title shot. If he loses this fight, he surely loses his shot.

A crazy decision for sure. How many people currently competing in the UFC would have done the same thing? You could probably count them on one hand. And that’s not a criticism. I’m never going to fight for a UFC title, so who am I tell people how to go about that? Frankie’s straight out of that cowboy era though; a dying breed, or at least an endangered one.

To some, a fighting legacy is more important than a championship legacy. I think we should cherish those people when they come about. It might not be the smartest way to do things, but it’s exciting, isn’t it?