Frank Mir one again in contention

Fresh from one of the finest performances of his career, Frank Mir may be set for another run toward the top of the UFC Heavyweight division. Though a two-time UFC champion, Mir has never really been seen as ‘the guy’ at 265lbs, often in the shadow of the likes of Randy Couture, Cain Velasquez and former rival, Brock Lesnar.

However, Mir has fought exclusively inside the Octagon since November 2001, putting together one of the most accomplished and eventful UFC careers in recent memory.

A globally revered grappler, Mir began his UFC career in devastating fashion, as the then-22 year old submitted former ADCC open weight champion, Roberto Traven, with a first-round armbar. This started an immensely successful run for Mir, who would go on to finish Pete Williams, Tank Abbot and Wes Sims on a charge that would take him to 7-1 and a UFC title shot.

The only setback coming at the infamous UFC 38: Brawl at the Hall show, where popular Sunderland Heavyweight Ian Freeman’s defeated Mir with a first-round TKO.

Nonetheless, Mir entered his bout at UFC 48 on a roll, and with the vacant UFC Heavyweight championship up for grabs, Mir found himself opposite Tim Sylvia in Las Vegas. The fight was over just 50 seconds later though, as Sylvia attempted to power out of an armbar attempt, only for the increased resistance to cause a visible break of Sylvia’s radius bone.

Despite the Maine-iac’s protestations, Herb Dean stopped the fight and Mir was the new Heavyweight champion. Atop the UFC for the first time, Mir, who had earned his Brazilian Jiu-Jitsu black belt with his win over Sylvia, was looking forward to big fights on the horizon.

However, just a few months later, a motorcycle accident saw things head south. After being struck by a car whilst on his motorcycle, Mir was flung through the air and suffered multiple injuries. His femur was broken and would require a rod to be inserted into his leg during surgery.

Mir also tore all the ligaments in his knee. The injury would put him on the shelf for the foreseeable future, but more importantly, would have a serious impact on his health. Whilst the UFC created an interim title expecting Mir’s return, Mir himself was busy drinking away the pain.

As the Las Vegas native and his wife Jennifer told Kevin Iole, Mir was intoxicated “seven days a week, 24 hours a day”. It stemmed from two separate doctors informing Mir that his career was over, so he turned to alcohol to dull the pain caused by what he believed was the end of his time in martial arts, and his ability to provide for his family.

As Iole explained, it took wife Jennifer much time and effort to convince Mir to prove the doctors wrong. And though he tried, it looked as though the Doctors may have been right. A showdown with Andrei Arlovski, who took over as Heavyweight champion had been mooted for the past two years but would never come to fruition.

Instead, Mir faced Brazilian Heavyweight Marcio Cruz, a fight he was expected to win handily. He was stopped on strikes in the first round. He then laboured to a decision win over TUF veteran Dan Christison, before being stopped again by Brandon Vera, in another fight he would have been a heavy favourite.

Mir was unable to live with fighters he would previously have beaten comfortably. Mir later explained that he was still feeling the effects of his accident.

After a few months to recover, Mir was on the comeback trail on the undercard of the Randy Couture vs Gabe Gonzaga Heavyweight title clash at UFC 74. Across the Octagon was tough Dutch kickboxing standout Antoni Hardonk. After just 1:17 seconds, Mir locked in a Kimura and walked away with the submission win.

After the fight was over, Mir looked straight down the camera and declared “I’m back!” Something that would be tested in his very next fight, when Frank Mir was back in the big time.

Welcoming pay per view juggernaut and former WWE champion Brock Lesnar to the Octagon, many casual fans wrote Mir off when looking at the sheer size of his opponent. The fight started as anticipated, with Lesnar easily taking Mir to the ground, however as Lesnar transitioned through Mir’s guard, he was caught in a kneebar.

The Brazilian Jiu-Jitsu black belt took the win after just 1 minute and 30 seconds of fighting and would go on to win the 2008 submission of the year for his efforts. Mir would go on to win the UFC interim Heavyweight title after stopping Antonio Rodrigo Nogueira, whilst Lesnar defeated Randy Couture for the main belt, setting up a rematch on the very biggest stage possible.

Headlining UFC 100 in an event that would fetch a record-breaking 1.6 million PPV buys, Mir would impress early on the feet, before being taken down and stopped by the Lesnar ground and pound. 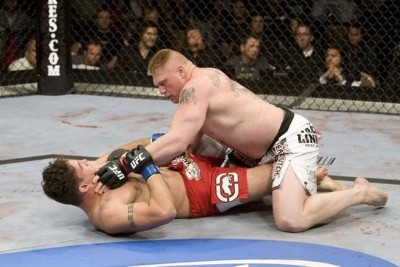 Getting Ko’ed By Shane Carwin

He would bounce back by quickly dispatching of Cheick Kongo, before a violent knock out at the heavy hands of Shane Carwin at UFC 111 would cost him a second UFC interim title.

With questions being asked, Mir responded once more and strung together victories over Mirko Cro Cop, Roy Nelson and second win over Nogueira (becoming the first man to submit and knock out the Pride great) with what Dana White referred to as the “submission of the century” to earn yet another shot at gold.

This time Junior Dos Santos would prove too much to handle, stopping Mir on strikes in the second. This would begin a run of 4 straight defeats, with losses to Daniel Cormier, Josh Barnett and Alistair Overeem following. Frank Mir found himself back where he was in 2010 after the Carwin knockout and was forced once more to respond.

Training now in Albuquerque, New Mexico with Greg Jackson’s camp, Frank Mir fully believes in his improved wrestling, for a long time a handicap in his career. This has allowed him to showcase his equally improved striking, which he did against Antonio ‘Bigfoot’ Silva last month in Porto Alegre, where a first-round knockout won him a Performance of the Night bonus. So, what to the future?

Well with a certain reigning WWE champion back in the picture, there may be a trilogy on the horizon, and it’s a fight Mir certainly wants. Referring to his extensive training with leading wrestling coach Ricky Lundell which would prevent Lesnar’s takedown attempts, Mir recently claimed he would “crush Lesnar standing up”.

Whether or not the Lesnar payday materialises, Mir faces a challenge if he is to begin another run toward the top of the division.

The Las Vegas native has been a champion, a contender and loser at times in his career, but remains one of the most decorated fighters the division has ever seen. He leads in fights (24), wins (15), finishes (12) and submissions (8) and has likely put together a Hall of Fame CV.

Whether one last run, a marquee fight or even a return to broadcasting (Mir received plaudits for a spell as colour commentator in the WEC), history suggests Frank Mir isn’t finished yet.