Marketing fighters in the UFC

The third and final instalment of Eoin’s three-part series on something which the vast majority of competitors have to contend with, a fighters marketability. In case you missed it, Part One of our marketing fighters series. and Part Two in the series can be found here. He gives us his final thoughts on the avenues and opportunities he believes can help take fighters exposure to the next level.

Thus ends my simple analysis. After cogitating on that, I came up with some sample ideas which could help improve fighter income flow. I know some of them will be controversial, as it is a serious, unscripted sport, not professional wrestling. But it is also prize-fighting. The more people watch you, the more you earn… eventually… hopefully! Some may also be naive, but this whole article has been something of a brain dump!

Might as well get the dodgiest one out of the way first. If you have confidence issues, this could help you tremendously. Not only might you be more open to making an ass of yourself, but you may be generally become more engaged in interviews, thereby increasing your popularity. Secondly, those who are naturally engaging may find an alternative or subsequent career in media.

Use it. It is your best and cheapest friend. You might think it nerdy or invasive, but suppress that and use this free tool as much as you can. Many fighters use it to post news on upcoming fights, to promote merchandise, to big-up their sponsors and interact with fans. Don’t overlook the last, no matter how geeky you may think it, what’s a flash in the pan for you, could be a treasured memory for the fan.

Call other fighters out. Don’t give a simple “I’ll fight whoever’s put in front of me”. This may convey a reasonably good attitude to the promotion, but it won’t put as many bums on seats. I loved Ryan Bader’s recent storming of the UFC 187 presser. Obvious it may be, but I think it has already started to work for him.

I don’t know how expensive it may be, but a well-designed shirt can grab people’s attention. I absolutely LOVE Paddy Hoolihan’s latest line in t-shirts and want to grab the Guinness and Lyon’s ones as soon as I can.

Relatively inexpensive to put on, but I guess can chew up your time. If you do decide to broadcast, make sure to grab sponsors! If you don’t, then try to get yourself on as a guest on other shows to get your name out there.

Interact with fans when you can. It might be scary meeting some of them face-to-face, but as stated already it’s a big thing for them. You end up with higher fan persistency, and a potential for better income; as it’s fans who indirectly pay you after all.

Sounds scary, but isn’t really. Be proud of where you’re from and project it. Wear the flag; speak your native tongue. Get people talking about you. Conor McGregor does it really well. Brazilians and Mexicans have been doing it for ages.

Chris Weidman is one of the first fighters I’ve seen who wears the Stars and Stripes for the USA (remember, I’m not that long a fan!), and now I see Ronda Rousey’s latest promo shoot for UFC 190 has the US flag draped around her too. It seems to be catching on.

Write opinion and feature articles for blogs. It gets your name out there.

Keep abreast of your industry. Moreover, read inspirational books and take note of quotable phrases. Use them at the right time.

Okay, it may seem cynical. But even charity work done with fully selfless motives may pay you back someday.

Yeah well… at the end of the day, if you’re Conor McGregor at promotion, but Frank Spencer in the ring, no amount of this advice will be worth anything to you!

A highfalutin term for a quick look at what some well-known fighters have been doing to promote themselves.

As shy as Conor McGregor is, he has done a remarkable job at keeping himself in the news. He’s an engaging, ticket-selling company man, has produced his own TV series about (what else?) himself, he’s great with fans and to top it off is interested in his sport.

When interviews turn serious you will see a different side to Conor: a serious student of the game, thoughtful and honest. He has also embraced most common social media sites and recently written a piece for the Irish Independent. He has a few sponsors, some of which are massive (Reebok, Monster) – and his own Dethrone sub-line in shirts. It’s hard to think of someone who comes close, except maybe…

Well, what hasn’t she done? She’s charismatic enough to have appeared on most A-List talk-shows, been in movies, had 100,000 people scream her name at Wrestlemania, released her bio (which I hope to read or listen too soon), was an early adopter of social media (which helped her enormously early on in her MMA career.

Although she rarely mentions MMA, other than her own training and upcoming fights these days). Every photo she uploads to Instagram rapidly gets tens of thousands of likes. She too has big sponsors and is largely a company person (although you can kiss any further TUF appearances goodbye.

Which is a shame, because I thought she was way more invested in her fighters than Miesha was). She calls people out, and is not afraid to speak her mind. I think she’s been wonderful for the sport, but how long she’ll remain in it has to be seen. 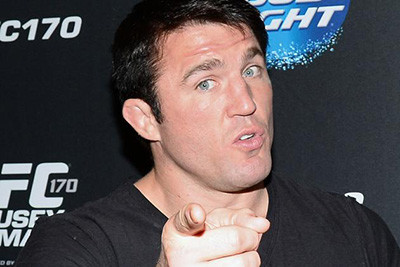 The Bad Guy. Due to his PED abuse, he’s not everyone’s cup of tea, but I think he’s great. Chael Sonnen can self-promote without spending a penny. Nobody can call someone out quite like Chael – not even Conor (well… not until that fence-leaping incident).

He still keeps himself busy with a podcast (always worth a listen, if even to hear how he promotes his sponsors and to hear how engaging he is), and his own merchandising line. He also has written a book, which I haven’t read – due to his politics I may give it a miss.

He’s a bit more active on social media than he used to be, and is still outspoken in matters of MMA and now there are rumblings of him making a return once his ban is up. I’d like to see him back, on the assumption he can genuinely keep clean, “and only on Pay-Per-View.”

Aww, I love me a bit of Roxy. Unfortunate in TUF/UFC, but has had a recent improvement in form with her new coach, Roxanne Modafferi has been constantly busy promoting herself, especially since her return to the US from Japan. Her market is more niche, in that being something of a geek, she courts the same kinds of people (Star Wars, Anime fans etc.).

She pimps t-shirts, fight gear, restaurants, dietary supplements and, er, socks. She used to write a blog, but I don’t think it’s been updated for a while. She’s also written her own book, the title of which has become her nick (The Happy Warrior). She has a quirk at events where she dresses in themed costumes and has made herself one of the most popular fighters on the roster at Invicta.

Not ungentle on the eye, Bec Rawlings and Felice Herrig have gone for the flagrantly sexy look, and do a good line as heels in promoting their fights. As said earlier in the article, guys sometimes don’t like women who are badasses, and in the past, I have fallen into that category. I have to admire the way they embrace it, though.

Also, the way they get sponsorships and subsequently promote them. They both are big social media users and post a lot of (occasionally provocative) photos. The sexy sells well sometimes! I’ll still be rooting for Jojo vs. Bec in Glasgow, though!

I’ve only been following the latest golden-child Paige Vanzandt for the UFC for a short while now. She is attractive (well, duh), but in a more wholesome way. She’s a huge user of social media and is not afraid to advertise her religious background there. While she’s obviously good looking, she sells differently. She’s also done well with sponsorships and is a company-girl. Good for her; I hope she goes far!

I think the star of Chris Weidman is improving, but you can tell from his UFC 187 post-fight interview that he’s frustrated. He’s a user of social media, has adopted the nationalistic view and draped the flag, and now… just now he might be beginning to reap his just rewards. It’s about time.

I don’t think he ruthlessly self-promotes enough, though, and perhaps he could do a little more with getting himself in the media, maybe calling some people out… just make himself more memorable. He seems nice, but a little anonymous.