Derek Brunson: Another Victim of Momentum and the Moment

In one of the wildest UFC main events in quite some time. This past Saturday night in Melbourne Derek Brunson took on Robert Whittaker. It was all action from the start and after sensing a potential finish. Brunson literally chased Whittaker, completely throwing caution to the wind. In the end, it would lead to his demise.

The marauding Brunson would walk on to a Whittaker counter before being finished by the accurate strikers following flurries. Whilst many mocked and critiqued Brunson’s questionable tactics. It wasn’t hard to immediately see what had impacted and influenced the contender’s performance. Brunson entered the clash with Robert Whittaker on a five-fight win streak. Including four straight 1st round knockouts, none of which even went past the three-minute mark.

An extensive win streak of any kind is rare in the UFC, let alone one involving so many quick and violent knockouts. It’s when you look into those wins even further though that you have a greater understanding of Brunson’s psyche heading into this past Saturday’s fight. The second of those four knockout wins against Sam Alvey is particularly insightful in hindsight. After rocking Alvey early, Brunson aggressively swarmed, letting go of a wild attack of punches to finish the fight.

Though it could be argued that Brunson’s attacks in that Alvey fight weren’t as wild as those that we saw this past Saturday night. He certainly left himself open in the hunt for a finish. In fairness, it should also be noted also that for all of Alvey’s strengths. He hasn’t shown himself to be quite the accurate striker that Whittaker has and that likely could’ve made all the difference. 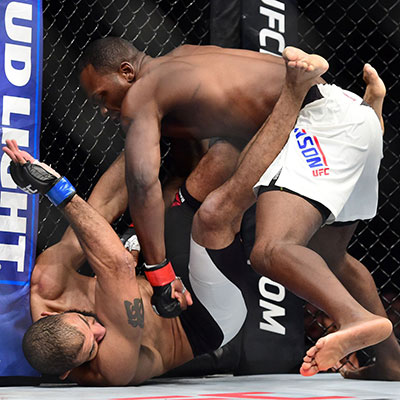 Nonetheless, Brunson’s next fight would once again be finished by a big onslaught as he finished Roan Carneiro with ground and pound. Though different in style of finish, it was another example of Brunson trusting his power and emptying his gas tank in the search for a quick end. It’s rare in MMA that you see fighters at the top level unleash huge attacks early in the fight simply because the sport’s history is so littered with cases of over-aggression leading to dramatic defeats.

For Brunson, it was working though, as soon as he smelt blood he would simply throw everything and his athleticism and raw power was leading him through. He was a hungry fighter desperate to make a real impact in the quite loaded Middleweight division and his unique and exciting style was doing just that. Brunson’s momentum would continue with a stunning stoppage over Uriah Hall that came from just a single left hand that floored Hall. Derek Brunson had scored the biggest win of his career and he’d done it all in the blink of an eye.

Considering the run of success Brunson had heading into this past Saturday’s fight and suddenly his approach becomes much more understandable. That’s not the only factors though, also consider that this was Brunson’s first UFC main event. With all the spotlight on him and the potential opportunities endless. A win here would’ve positioned Brunson even closer to a possible title shot.

Consider all of these factors and is it really surprising that Brunson would trust what had brought him so much success. When it came to the biggest night of his professional career? And that’s what Brunson did, he sensed a potential finish and chased it. He simply followed his instincts. Whittaker proved different to Brunson’s prior victims though and weathered the storm before finishing the fight himself.

To conclude, Derek Brunson would have learnt a lot from his first-ever UFC main event. Perhaps he became a little too caught up in his recent success and forgot some of the fundamentals. That first made him a threat in the Middleweight division, to begin with. Regardless, though it’s easy to criticise, once you understand the possible reasons behind Brunson’s approach it’s a lot more appreciable.

Was it the best way for Brunson to fight in his first five-round affair? Absolutely not but he stuck to his guns and gave it his all. It was exciting and dramatic as once again, Brunson trusted that his power would lead him to victory. Granted, on this occasion, it did not but this is only really a defeat for Brunson if he learns nothing from it.