Just two years ago, Dennis ‘The Menace’ Bermudez was fresh off of his seventh straight UFC win. However, a couple of bumps in the road mean that Bermudez will enter the cage this Saturday night to little fanfare and hype. Not long ago ‘The Menace’ was edging ever closer to a title shot but MMA is an unpredictable and unforgiving sport. Now at the back of the line, Bermudez will look to rebuild some of the momentum he had in abundance just two years ago.

As Dennis Bermudez entered the octagon for The Ultimate Fighter Finale in 2011, many doubted his chances against surging Brazilian Diego Brandao. The Brazilian had scored three first-round knockouts to earn his spot in the final, overshadowing Bermudez’s own finishes. Regardless, the fight was a dramatic one. ‘The Menace’ came back from an early knockdown to drop his foe heavily as the first round approached its end. However, the resilient Brandao snatched an armbar from off his back and submitted Bermudez in an instant.

It was a tough loss for ‘The Menace’ but he had performed impressively against his highly hyped opponent. The question now was whether or not his level would be good enough to maintain a spot on the UFC roster. Bermudez returned with a decision win over Pablo Garza. A win he followed up with a standing guillotine finish against Tommy Hayden. A pair of solid octagon victories seemed to set up Bermudez for a solid stint in the organization but I don’t think many onlookers expected the win streak that was to come. 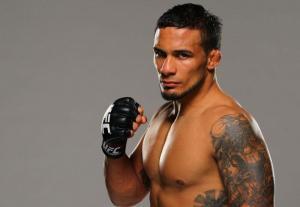 Bermudez then battled Matt Grice in a greatly praised fight of the year contender. The bout went back and forth with Grice dropping ‘The Menace’ in the first. However, in the third round, Bermudez unloaded on a hurt Grice desperately trying to score the stoppage victory. Astonishingly, Grice stood valiantly and absorbed an obscene amount of damage to make it to the final buzzer. Regardless, the dominant third round was enough to get Bermudez the win, extending his streak to three.

In his next fight, Bermudez was matched against emerging prospect Max Holloway. The young Hawaiian seemed to get the better of the first round but a strong third for Bermudez meant that the fight rested on a close second round. In the end, two of the three judges elected ‘The Menace’ the winner. The fight was a controversial one but in reality, it was a close fight that could’ve gone either way. The word ‘robbery’ is thrown around far too often in a sport as diverse as MMA.

Either way, Bermudez moved forward and furthered his win streak to five with a controlling win over Steven Siler. It seemed that though Bermudez was undeniably consistent, he was lacking the finishes required to really create widespread fan interest. In his next fight that changed though as Bermudez overwhelmed Jimy Hettes in the third round with multiple punches and a knee. It was a key moment in ‘The Menace’s growing hype as he scored a stoppage over a talented opponent.

With each fight, it seemed Bermudez was proving more doubters wrong and making any criticisms inapt. The impressive finish landed ‘The Menace’ a spot on a FOX main card against durable veteran Clay Guida. Bermudez rose to the occasion and seized the opportunity, controlling Guida en route to scoring a rear-naked choke finish in the second round. At the time it seemed to be a real star-making performance, a finish win on FOX against a recognisable opponent known for his toughness.

Now in touching distance of a title shot, Bermudez was matched against fellow elite contender Ricardo Lamas. It was a big moment for ‘The Menace’ and represented a chance to really set himself apart from his competition. Unfortunately, it wasn’t meant to be as Lamas dropped and submitted Bermudez in the very first round. It all happened in the blink of an eye. Suddenly, seven straight wins were rendered virtually irrelevant. 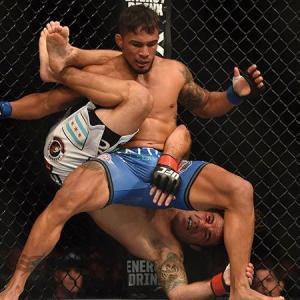 Bermudez returned hoping to make people forget about his recent setback as he took on the big punching Jeremy Stephens. After a strong start, Bermudez seemingly got sucked into Stephens’ type of fight. After some thrilling back and forth exchanges, the fight came to a stunning halt. At the start of the third round, Stephens timed a jumping knee perfectly, finishing Bermudez in stunning fashion. In less than a year, Bermudez had gone from a seven-fight win streak to a two-fight slump.

Now at the back of the line, Bermudez was in a must-win position as he took on Tatsuya Kawajiri. It wasn’t ‘The Menace’s most exciting outing but he fought with maturity to ensure he got the victory, controlling his opponent as the bout went on. It was a pivotal win for Bermudez who needed to turn around his faltering momentum. However, it wasn’t a win that would garner the hype and excitement Bermudez had following his dominant Clay Guida showing.

This Saturday night, in the co-main event, Bermudez will get the perfect opportunity to impress though as he takes on Rony Jason. In a prominent spot on the card, ‘The Menace’ can really leave a lasting impact. Whichever way you look at it, I think it’s time Dennis Bermudez gets a little more credit. He has won the majority of his UFC bouts and he’s quietly compiled a catalogue of very entertaining fights.

If Bermudez does eventually get a title shot down the line, he definitely will have earnt it. He was ignored and looked over for much of his impressive win streak but this Saturday, Bermudez holds the keys. If he does what I’m sure he plans to, ‘The Menace’ is once again a prominent part of the unique Featherweight division. Regardless, don’t underestimate him due to some unsuccessful outings. He is capable of great things, especially with momentum on his side.