You’d be forgiven for thinking that this weekend’s UFC card was just another Fight Night. There’s a title defence taking place at UFC Kansas city. A few mid-tier fighters with some up and coming contenders topping off yet another night of mixed martial action. On the frantic UFC calendar to slot in between the main UFC cards, sounds about right, right? 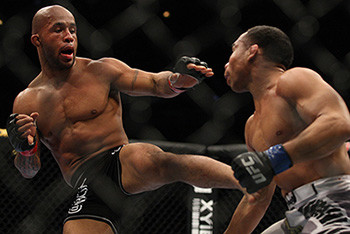 But the twist here is that perhaps one of the greatest fighters to ever grace the octagon Demetrious Johnson is defending his belt.

Not only defending but looking to equal an all-time record set by the great Anderson Silva in title defences. Yet, almost nothing in the way of promotion.

The card has all the marketing might of a weekend filler. With barely a blip on the outlook for the year ahead. Yet there he is, one of the greatest fighters of all time. Currently ranked by both the UFC and Sherdog as the number one p4p… it’s crazy.

What is it about the pocket-sized phenom that turns people off. Is it that very thing, the small in stature simply don’t get the fans’ pulses racing or is there more too it? If Mightymouse were a brash outspoken charismatic white mini-me from Ireland, would it make a difference. If he were a fighter, fighting in the mid to upper weight division’s would that make a difference?

Reading through some online comments the fans seem to split on their reasons for not getting behind the flyweight king. 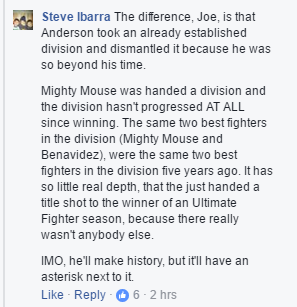 While Ian Ruz thinks he knows the answer…

With a current record of 9 straight title defences. Mightymouse is on the cusp of equalling the great Anderson Silva with a record of 10. He does that, then what can people say? In Johnson’s own words he’s already exceeded is own expectations. Yet that won’t stop him going one better and setting an all-time record, stepping over the high bar set by the now ageing Spider.

But seriously, if he definitively beats Wilson Reis where or what next? That division is looking so god damn stale it could put you right off your appetite. Maybe it’s time for him to consider some fights in the bantamweight division.

Similar to what Anderson Silva did while dominating at Middleweight. When it seemed like there really was no one to test the champion. He mixed it up by taking on some of the guys at 205lbs, and it worked really well. Why that’s not being bandied around as a potential next step I’m not quite sure.

For now, at least the 125lb undisputed king has his eyes set on Reis. The 135lb champ Cody Garbrandt has been making some noise and thinks he could be he one to drop down and dethrone the king. Let him come…

Right now, Demetrious Johnson is the greatest fighter on the planet. Like him or not, what you see is what you get. And this weekend on a lowly free UFC on Fox 24 Fight Night. You may one again see Greatness.

Part-time surfer, full-time dog fanatic, Martial Arts practitioner. I’m trying to save the world, one fight at a time. Catch me blogging at FightNomads.com.

Demetrious Johnson Breaks Down The Matrix Against Wilson Reis