Dana White Has Already Made His Millions

Another PPV in the history books, another event where Dana White looks as though he is going through the motions. It is ironic Dana talks about a certain Conor McGregor having life-changing money and doubting whether he ever comes back – Dana’s reported net worth is now 4 times that of McGregor’s millions.

Long gone is the greenfield promoter, who had intensity, snarl and played the role like a regular blue-collar worker who had just scored a big-ticket corporate gig. 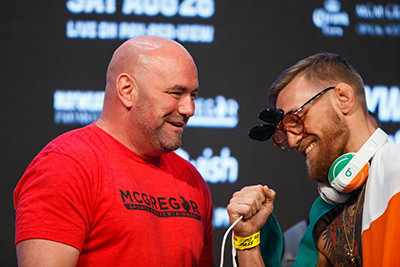 Those days are long gone. When was the last time Dana actually looked fully engaged? To a certain extent, we saw that Dana White during the build-up of the Mayweather vs McGregor promotion.

Dana looked in his element. This was something new, promoting a once in a lifetime event with his jewel in the crown and franchise MVP, Conor McGregor. It looked as though Dana had hit his promotional peak.

Fast forward to 6 months later and we see everything finally go back to normal in MMA and boxing (well, almost) – The face of the UFC has boldly claimed: “2017 was the promotion’s biggest ever year.” Along with the lack of direct insider knowledge of what is actually going on with his two biggest star’s returns to the Octagon (Nate Diaz and Conor McGregor). Not forgetting his public spats with Tyron Woodley and Tony Ferguson.

We are in new territory in the UFC these days, WME/IMG seem to be a faceless corporate juggernaut who don’t really know what they have let themselves in for and their insistence on creating fights which make the most ‘bang for buck’ regardless of rankings or sense is very much the norm these days.

Dana White’s original old school persona doesn’t fit in with this model and it shows more and more every time.

What Does The Future Hold For Dana White?

What does the future hold? Time will only tell, but it is looking increasing likely that Dana’s next passion project, disrupting the boxing world means his days as a public figure in the UFC look almost numbered.

Would we see the old traits that made him undoubtedly the centre of the promotion? Perhaps. Dana’s ability to change the image of MMA and bringing into the mainstream consciousness was a joy to behold and giving him a similar mandate would likely be the challenge he needs and probably craves.

Where would this leave the UFC? Would they go down the route of Bellator, and find a Scott Coker like figure…a more of a reserved figure but who gets the fight business inside and out. With a commercial acumen to truly understand his audience? Or do they go down the path of a Chael Sonnen type promoter – animated, quick-witted and confident.

With a little bit throwback to Pro-Wrestling thrown into the mix? The latter would certainly fit within the structure of WME/IMG. But who fits that mould currently, a there seems to be a drought of these personalities in MMA for 2018?

The person who does eventually succeed Dana will have some mighty large shoes to fill. And they will need to stamp their own brand/personality into the role from day one. But one thing is for certain, those days could soon be upon us as with each event that goes by. We see an even more disinterested President of the promotion every time.

Who would you like to see eventually replace Dana White?