Check out part 1 of our interview right here with UFC Hall of Famer Dan Severn!

Do you think fighters get paid enough?

No, look at boxing. When you think about Floyd Mayweather, another trash talker but only because he understands the buying ability of that style.

Muhammad Ali wrote a book. He was actually quite but because he watched professional wrestling. At one point in time during his career, he became the loud mouth Cashes Clay. Who later on would become the rhyming and charismatic Muhammad Ali. But again it was all to sell tickets.

I would hope to see MMA eventually rival the paydays of boxing. These athletes, sure they are making more money now then we used to. But realistically you only have one really dominant company in the world, the UFC.  I would like to see a couple more companies rise up and not because I have an axe to grind with the ultimate fighting championships.

I look at it like this, who is stepping into the cage and risking physical damage to their bodies to the point that they could potentially die or compromise the quality of their lives for the rest of their lives? It’s not the owners.

Do you think there’s a problem with judging in MMA? 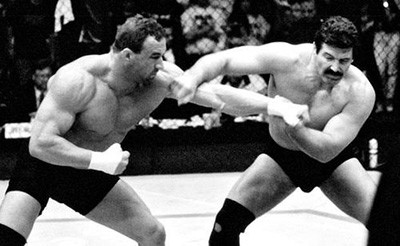 Because the referees, judges, athletic commissioners and regulators of the sport don’t have any true experience in the sport they are simply speculating.

I think that legitimately, you should have trained in martial arts for a certain period of time and maybe even competed to a certain degree but that’s kind of difficult to say. I can’t say you should have been a pro because it’s just not cut out for everybody.

But what’s wrong with the sport is that because you have all these people that don’t have this background all these rules and regulations are being put into place.

You should know a bit about the ground game, a bit about the stand-up because as a referee you should have an idea of what’s going through these athlete’s minds in there. If someone is caught in a chokehold or something, you can recognize it and stop the match quicker so that no one is getting hurt.

The fact that the sport has been around so long, I think that more and more for you to be a judge you should have some type of martial arts background.

The biggest problem is that the state legislators are telling these judges what to look for and they don’t have the proper experience to be making those kinds of decisions.

What do Don Frye, Magnum PI, Apollo Creed, and Dan Severn all have in common? Yes, it’s their amazing ability to grow a moustache.

Now, the funny part is that I sported a beard in the ’80s for almost five years. My children were young at the time, and one day out of nowhere I decided to see what my face looked like without all the fur so I shaved it all off. As I walked out of the bathroom, my children started to cry! I asked them what was wrong, and they kept saying “Who are you?!”. I was like “I’m your daddy!”. They were only like three or four aha!

You and Hulk Hogan in an “I Quit” match, who wins?

What are your thoughts on CM Punk?

I’ve never met CM Punk, and I have no idea as to what his abilities are. If he is making this kind of noise and drawing this much attention to himself, I sure hope he has some ability otherwise he will be exposed for what he is.

Is The Beast Still an MMA Fan?

Are you still an avid fan of MMA? If so who are some of your favourite fighters to watch?

Well honestly, I never was aha. I had to have other people bring it to my attention in the first place. And now when you think about it, there’s too much content. Just the UFC alone has a few pay-per-views a month, a Friday night Fox fight, The Ultimate Fighter show and then you throw in Bellator and WSOF. There are so many companies trying to carve out their niche.

There are some colourful characters out there that I like, such as Conor McGregor. Now, ironically and I’m not saying this just because I’ve got you on here and you’re Canadian but I’ve always liked George St-Pierre. I like the way he represented himself and also how he represented the sport. He was always in a sports jacket, a tie, and he always conducted himself as a true professional.

Now, on the flip side, If I owned the company I want the crazy-ass Conor McGregor’s, I want the Brock Lesnar’s, I want guys who are wearing silver chains and howling at the moon.