Dan Severn Talks About his MMA Career, Including Becoming the UFC Champion, How Professional Wrestling Influenced his Career and Gives his Thoughts on Ken Shamrock & Royce Gracie

A man who needs no introduction though deserves one. Dan Severn is a true pioneer of Mixed Martial Arts. He is among one of the first few champions in the UFC during a time as he refers to as the “No holds Bar” era of the sport. Competing in MMA events around the world, in over twenty different promotions, Severn has amassed over one hundred victories in the sport over competitors such as Oleg Taktarov, Tank Abbott, Ken Shamrock, Travis Fulton, and Forrest Griffin

Beginning his MMA career on five days’ notice at UFC 4, Severn would soon earn himself the title of “The Beast” and go on to have a truly remarkable career until his retirement in 2012 at the age of 54.

Venture into the mind of one of the sports earliest pioneers, UFC Hall of Famer Dan Severn.

In your first run in the UFC, at UFC 4, you quickly defeated your first two opponents of the night sending you to the finals against none other than Royce Gracie. Do you think that fight was when Jiu-Jitsu truly broke on to the world combat stage? Little Brazilian Vs the Hulking American wrestler.

Umm, boy… No. That’s the short answer but I’ll explain it a bit more. What sets me apart from every other MMA competitor are a number of factors, one being pure blunt force.

I started my cage fighting career at the age of 36, and I was almost 37. No one starts it at that age, that is when they retire. The UFC, since the beginning, never had my age correct.

Training For a No Holds Barred Fight at UFC 4

I only trained for 5 days, at an hour and half per day and I walked into the world of “No Holds Bar” fighting at UFC 4. Many people bring up that match and ask me what was it about that match, did you know this or that. Simply look at it this way, Christmas came early for Royce Gracie that night.

Again, there is only one person who knows what went down in that match and that’s me. At that time, I had been an amateur wrestler for 26 years. That’s 26 years of rules, regulations, and sportsmanlike conduct; you don’t punch people.

During the course of that match, I struggled more with my conscience than I ever did with an opponent. Even when I did finally throw strikes, if you go back and watch the match, you can see that they are all peripheral and to the side of the head.

Sure I tapped, but did I tap because another man beat me? Or did I tap because I was unwilling to do what I needed to do to another man in order to win. That moment still haunts me to this day. I ask myself what kind of questions would be asked today if I had done what I knew I was capable of doing in that fight.

Would I like to have a rematch? Yes. And I would not be the Dan Severn from 1994.

What are your thoughts on Ken Shamrock fighting Royce Gracie? 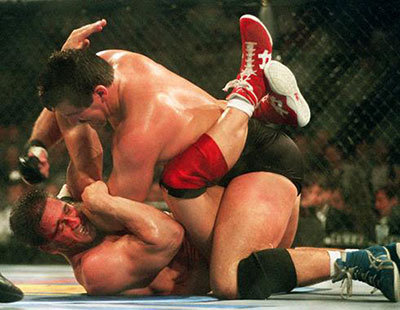 Dan Severn Coming Out of Retirement

I retired from MMA in 2013 with a clause. I said I would come out of retirement for one of three people: Coleman, Shamrock, or Royce. I’ve got no axe to grind with anyone else.

But those three, oh yeah. Coleman’s out of the picture because he’s got health issues. But Shamrock and Royce, if they want to play, I WANT TO PLAY TOO. But I’m not gonna play very nice.

In your next appearance in the UFC, at UFC 5, you defeated all three of your opponents that night, making you the UFC Champion. Can you describe what that moment felt for you? What was the first thing you did after the fight?

Well ahead of that fight, I had my first of only two ever training camps. I took thirty-two days out of my life to become something. I became something, and I achieved my goal. I dedicated myself and worked towards something and I succeeded. So it was well worth it.

By the same token, during those thirty-two days, I moved away from my home. I could not be a husband nor a father. I had to leave my family behind. It was something I explained to my wife and it was something I had to do.

I stayed by myself and had a very Spartan-like existence. I had an old black and white TV sitting on a crate and two old VHS tapes. People nowadays can’t even fathom what I did. All I did was eat, sleep, and train. And on paper I came up with what my best strengths and attributes were because back then, you did not know who your opponents were going to be.

Fighting on Less Than 24 Hour Notice

Now, MMA athletes know who they are fighting sometimes eight months in advance. But back then, you found out who you were fighting less than twenty-four hours before you stepped into the cage.

You won the UFC’s Ultimate Ultimate tournament in 1996. In the tournament, you fought three times in one night for a cumulative fifty minutes of fighting. Can you describe how you prepared for the tournament and how you managed to endure such a taxing experience.

Well, that was actually my second training camp. The timetables were not yet established but I knew that most were around a two-hour pay-per-view. So in my mind I was doing some calculations, accounting for commercial time, introductions and other things of that nature. So I knew if I was fortunate enough to get through all three men, I had to prepare myself for a half an hour for each match. So I prepared went in prepared to go
for an hour and a half.

I was not easy. Out of a two-hour pay-per-view, I think I was in the cage for about an hour between all three opponents. 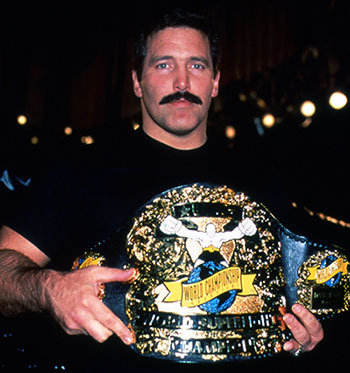 Actually my first fight that night, which was against Paul “The Polar Bear” Varelans, was not suppose to happen. It was the first time that they told you in advance who your opponent was going to be. My original opponent was supposed to be Pat Smith, a 6’ foot tall, 200-pound kickboxer. But Pat Smith did not pass the medical the day of the press conference.

Taking on The Giant Paul Varelans

So then they pull in an alternate by the name of Paul Varelans who was like 6’ foot 10”, 340 pounds and I have no idea who he is. So I had to send a couple of my guys to the local Blockbuster Video to try and find a tape that he’s on, rent the tape and then rent the VCR so that we could see what this guy looked like and what does he do.

Also, it was in Denver, Colorado with mile-high elevation.

Can you describe your longest match?

My longest match was in Brazil and lasted 40 minutes. I did not train even three months for that match. I actually laid in bed with a respiratory infection. I kept going into these coughing jags where I would hack up big chunks of snot.

The only reason I got out of bed was because I had a plane ticket and I had given my word that I would be at this event in Brazil. So I fly to Brazil, I get picked up and driven to a press conference, and I’m sweating bullets, I’m constantly drinking liquids, I’m coughing, I’m hacking…

In twenty-four hours, the Brazilians changed my opponent five times. So whoever I met at the press conference, he was gone. Then they brought in a new guy, changed him. They were leaving me messages at my hotel saying my opponent was in, then out and so on and so forth. To the point that I was the main event, I was the last match of the night and I’m standing in the cage and I still don’t know who my opponent is.

Then I see a group of Brazilians walking towards the cage, the announcer announces who my opponent is but it’s all in Portuguese so I have no clue what they’re saying. And I figure, as I’m watching this group come towards me, pretty soon only one gets to walk in here and then I’ll know who my opponent is.

Then thankfully, as the announcer was saying “Standing in the blue corner…” he said it in both Portuguese and in English so I knew what my opponent’s capabilities were. His name was irrelevant to me, all I needed to know was if he was a kickboxer, a grappler or a boxer.

It was thirty minutes of regulation time and ten minutes of overtime. In that time, he never touched me! But I couldn’t finish him because each time I had him down and started to go for some ground and pound I would go into a coughing jag. I was coughing up so much snot that I would go towards the side and spit out these big chunks of snot out of the cage.

But the crowd is getting angry because I’m not finishing this guy. And then all of a sudden, I hear this noise “katching! Katching!” and I’m like “what was that?!” I look over, and a couple of fans were throwing long neck beer bottles at the cage! So I look at them and say “You sons of bitches” and then spit out this massive snot ball into the crowd at these guys. And I’m yelling at them saying “Fuck you!”. It really infuriated me. They didn’t know how sick I was and I’m still there beating their best guy. You guys better be ashamed of yourselves!

How do you think your Pro Wrestling career helped you with your Mixed Martial Arts career? 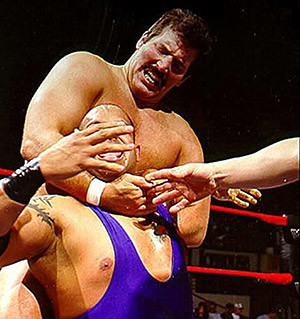 It helped me in a lot of ways. First of all, it really opened up my imagination. When I first began my cage fighting career, I knew how to dress and I knew how I was going to approach that cage.

You have Dana White in the UFC who is using Vince McMahon’s, from the WWE, business model as his own business model. Bellator has even gone to the point that they’ve had a hooded/masked fighter inside the cage.

There are so many fighters that are realizing that fighters are a dime a dozen. Its this mohawk, it’s this dancing routine that I’m doing as I’m heading to the cage, it’s the trunks I’m wearing… It’s the marketing ability of you (the fighter). What’s gonna make you standout from the rest of the pack.

Find Part 2 of Our Interview here!