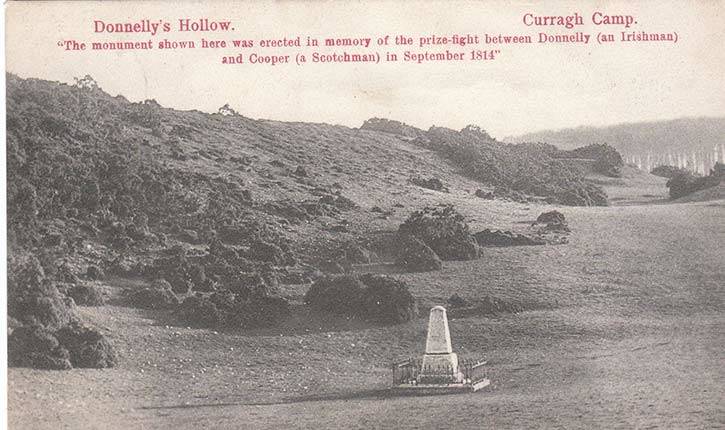 In County Kildare, just a short journey outside Dublin city is an area called the Curragh. Here nestled between some low lying hills is what is known locally as Donnelly’s Hollow. Located at the lowest point in the hollow lies a monument to a man long since dead and perhaps forgotten by many.

This monument was erected in gratitude to an Irish bare-knuckle fighter and the matches he won, which solidified his name forever in myth and legend, that man was Dan Donnelly.

Donnelly was born in 1788 in Dublin, into a family of seventeen children and a world of abject poverty. As his father did before him, he forged a career as a carpenter. Although known for being an outgoing and friendly chap and not someone who would go looking for a fight.

He was known for being very good with his hands if the situation called for it! And so this easy-going man from Dublin became recognised as someone not to be messed with.

How it all began

There is any number of conflicting stories for how he became so well known for his fighting prowess. After all, here was a guy who didn’t go looking for a fight (when he was sober). So how did he acquire this reputation in the first place.

Numerous stories abound of not only Donnelly’s altercations at local drinking taverns. But also many about him coming to the aid of both men and women in his local area, who were the victims of muggins and beatings. 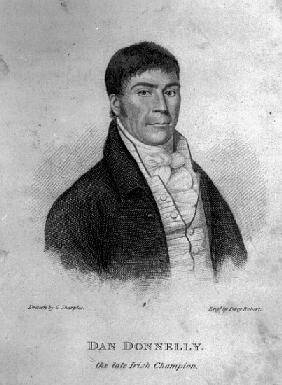 Legend has it that the city’s champion boxer at the time, heard tales of this Donnelly and his fighting exploits and became increasingly jealous of the notoriety was receiving. This led him to follow Donnelly around the local taverns of Dublin, pushing him into a fight. Until under duress he finally agreed.

The two men went toe to toe along the banks of the Royal Canal, with Donnelly offering many times to call a stop to the fight before it had even begun. This, however, fell on deaf ears and the fight took place.

With Donnelly administering the finishing blows in the 16th round. Making him the new official Champion of the city.

It was sometime later that an Irish Aristocrat by the name of Captain William Kelly. Overheard two English prizefighters joking about the quality of the fighting talent in Ireland.

Kelly took those comments as a direct insult to the whole nation and took it upon himself to find a fighter who would put those Englishmen in their place and this search led him to Dan Donnelly.

Donnelly’s first fight under the patronage of Kelly took place in 1814 at the Curragh, in what was known at the time as Belcher’s hollow. His opponent, an Englishman by the name of Tom Hall. Had been touring the country displaying his boxing skills while participating in exhibitions.

By the time the match began a crowd of some 20,000 spectators had filled the natural amphitheatre. All eagerly waiting to see their champion hand out a beating to the English boxer.

The fight itself was a back and forth affair with both fighters having their moments. It was, however, a blow by Donnelly that put an end to the fight, with Hall no longer wishing to continue. Donnelly was duly declared the winner.

While Belcher’s hollow being subsequently renamed Donnelly’s hollow to commemorate his crowning by the people as the new champion of Ireland. For many this victory was seen as giving a bloody nose to the Queen of England herself and for at least one very brief moment, the country rejoiced.

The Fight against Cooper

Donnelly was fond of a few pints and had enjoyed the spoils of his win. But by 1815 his money was all but gone when a new challenge presented itself, a fight against George Cooper. Cooper the heavy favourite, was yet another British fighter who had been touring the country giving boxing exhibitions.

He had heard to Donnelly’s prowess and so after some discussions, the fight was organised. This fight too took place at Donnelly’s Hollow in front of a crowd of 20,000 plus spectators who had travelled from far and wide. 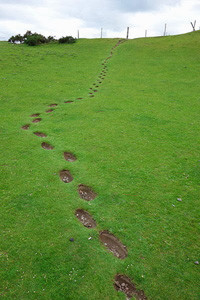 The fight was a back and forth battle with either fighter taking the upper hand throughout the bout. Until finally in the eleventh round, Donnelly finished Cooper with a crushing right hand that shattered his jaw. The huge crowd celebrated their triumphant fighters win with cheers that could be heard for miles around.

As Donnelly walked from the ring, his followers dug out each impression of his feet as he strode up the hill. Both they and Donnelly knew the significance of the win which very much represented a win against the British crown. Something that in all their years of trying, the nations rebellions had not been able to achieve.

Donnelly fought only two more times in 1819 and on the UK mainland. Once against Jack Carter with whom he drew and then against Tom Oliver. It was noted at the time that his reception by the British crown was quite foul. This it was believed, stemmed from his notoriety and boxing prowess.

Which left a bitter taste in the mouths of many English fighters. Donnelly beat Oliver over 34 rounds and then never fought again. The remainder of his life was strewn with stories of womanizing, gambling and excessive drinking, with him dying only one year later in 1820.

He remains were laid to rest in his beloved city of Dublin. But only a few nights later his body was exhumed and delivered to the home of a local surgeon. On hearing this news, his followers tracked the body down and threatened to kill the surgeon unless he returned the body immediately.

He did as they asked, but not before cutting off the right arm to keep for science. Embalmed in red paint, Donnelly’s arm still exists to this day and is located in the lounge of the Hideout pub, Kilcullen, County Kildare. 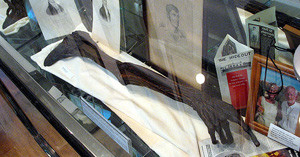 In 2006 and 2007 the arm was exhibited in New York and Boston, before finally returning to it’s home in Ireland. In 2008 Donnelly was posthumously inducted into the International Boxing Hall of Fame as a pioneer in the sport of boxing.

The trials and tribulations, and lines between myth and reality may have become blurred. But for many at that time, Dan Donnelly represented the whole nation of Ireland in its struggle against its powerful oppressor.