It’s been a year since Conor McGregor last saw the inside of the UFC octagon. And no one is feeling his absence more than his employer the Ultimate Fighting Championships. 2016 was a bumper year that the promotion wishes to no doubt replicate. But without their biggest star, it’s been a struggle. 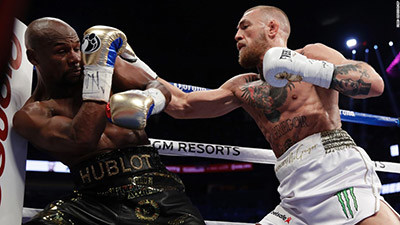 Of course, there have been a number of determining factors as to what the Irishman hasn’t competed in MMA. Including his super-fight against p4p boxing great Floyd Mayweather. A fight which he lost, while still managing to walk away from the competition some $100 million richer.

There was, of course, the other no small matter of him becoming a father to baby boy Conor Junior. And as any good father would, the lightweight champion wanted to spend some quality time with the new addition to his family.

Fast forward some months and a new challenger appears on the horizon. As “El Cucuy” Tony Ferguson is crowned the new UFC Interim lightweight title. With a solid win over Kevin Lee at UFC 216. Ferguson has officially installed himself as the number one threat to McGregor’s crown.

And now with seemingly nowhere left to turn (outside of a certain Mr. Malignaggi). It looks as though McGregor vs Ferguson might finally come to fruition later this year. or at least that is the hop of the UFC President Dana White.

“Hopefully by the end of the year… “When we talked around the Mayweather fight, he wanted to get back on the horse and fight again.”

And there’s another reason we could see Conor inside the Octagon before years end, adding;

“Plus, here’s a fun fact for you; If he fights two more times before, I can’t remember what Forbes’ year is, Forbes’ year is either March or June, he’ll be the highest paid athlete in the world.

“And you know him, he loves that stuff.”

All the more reason we could very well be looking at a McGregor vs Ferguson showdown in 2017! Might even be that end of year pre-NYE event, who knows?